Canada's popular Juno-award-winning jazz vocalist, Molly Johnson, is ready for her interview, reclining comfortably in a chair at a downtown Toronto hotel, as though it's her bathtub.

"Why aren't you bigger?"

Before Nikki Yanofsky, Diana Krall, even Holly Cole, there was Johnson, an artist with a long history as a popular performer, who has used her voice in social activism, most notably by starting the Kumbaya Foundation in 1992, which has raised awareness and more than a million dollars for people living with AIDS/HIV. But aside from a pocket of popularity in France, she's a local character who prides herself on living in the same house in Toronto's Annex neighbourhood for 17 years, known as "the girl in her pyjamas picking up the dog shit on the front lawn."

Her pretty face produces a frank expression. "Because I have never been driven by being bigger. In fact, I shun bigger," she snaps cheerfully.

Listen to that. And then this, "I am already shifting," she says during an exchange about her balance of work and career as a married mother of two boys, who are now more independent at 12 and 15. Her New York debut will be in January, after her scheduled concert in early November was cancelled due to Hurricane Sandy. In the New Year, a new album is planned for the U.S. market. She will make inroads in Asia. Also, "I have a dream to re-enact Kumbaya, [a festival of music and arts]," she says, explaining how she wants to do a one-hour TV special to illuminate Canada's aboriginal issues. She will do all this as well as continue her CBC Radio 2 job, as host of Weekend Mornings. Not ambitious? Really?

Talking to Johnson is like listening to artistic improvisation. Everything about her is jazz-like, filled with a restless energy, the art of the performance. Conversation is a series of riffs and passages that overlap, contradict, explain, explode on tangents. Dressed all in casual black, she wears red Mary Jane shoes, which she clicks together, Dorothy-like, when told they're cute. She uses her voice as an instrument, dropping it a few notes to make a point, drawing out certain words like taffy, shaping words with the scalpel of a hard-edged, sassy accent.

Make no mistake. Being Molly Johnson is a gig, one she likes, plays expertly, knows well, and understands the value of. At one point, she explains how Ed Mirvish, Toronto's late avuncular impresario, who cast her in a production of Porgy and Bess when she was 4, told her how to manage her talent. "You got a little switch there, Molly J. Turn it on. Turn it off. You can click that thing, and be super great, and then click it off," she recalls him telling her.

Well, the switch was on.

She revisits her youth like a favourite jazz standard. Her parents met in Switzerland, where her mother, Suzanne, who was born into a wealthy American family, had gone to a finishing school. Her late father, John, was a GI returning from the Second World War, who had come back to Europe after trying (and failing) to get into university in the United States. "[Universities] had a colour quota and a Jew quota," Johnson explains. Her mother returned home to her parents, announcing that she was going to marry an African-American. She was 18. "It was basically Guess Who's Coming to Dinner gone terribly, terribly wrong," says Johnson, now 53.

They moved to Toronto, where her mother became an activist involved in the formation of the Canadian University Service Overseas, a non-profit organization in the early sixties. She was the one who influenced Johnson's social activism. "You can't grow up under the office table of somebody who is planning and scheming to save the world, and not be affected."

The family of four children, including a cousin from her father's family, whom they adopted, lived in uptown, upper-middle-class Toronto. "We were the only brown kids in school … My Dad made sure we would get the very best, and I live up to that every freaking day."

Mirvish "stumbled across us," Johnson explains, referring to her and her elder siblings, Clark, an actor and director (Homicide, Life on the Street, The Wire), and Taborah, a singer and actor. (The adopted son, Ron, is a social worker.) She attended the National Ballet School – "when you are in a class with Karen Kain, you know you are not going to be Karen Kain" – and appeared in many theatre productions as well as TV shows. By 15, she had switched her artistic interest to music. In the eighties and nineties, as lead vocalist for two rock bands, Alta Moda and Infidels, she flirted with big success, but never achieved it. The child star, paradoxically, was a late bloomer in a way, not releasing her first self-titled solo jazz album until 2000. There have been three more since then, her last in 2008, Lucky, a collection of standards, earning her a Juno for best vocal jazz album of the year.

Ironically, that break-out year musically coincided with her being appointed an Officer of the Order of Canada. Both aspects of her career – her music and social activism – were acknowledged. Did that make it harder for her to simply focus on the solipsism of fame? "Michaëlle Jean put this darn pin on me at a very early age," she says, jokingly as she points to her lapel pin. "Oh, it's bad, totally bad. I curse it every day!" she continues on her humorous riff. "I have this responsibility thing," she acknowledges.

"It has always been like that. It's a nightmare to everyone around me," she says, unleashing a torrent of wide-mouthed, gap-toothed laughter. "When I was a punk, when I had Alta Moda, it was all political. I was outraaaageous is what I was. Running around the streets of Toronto in a 1950s bathing suit, in my Doc Martens and a blond mohawk."

I ask what she feels the through-line of her artistic career has been. "I know for sure that I don't write songs like, 'I'm nothing without you. Please, dear, sweet Jesus, come back!'" she says, singing her mock lyrics, head thrown back. "The through-line has always been, 'Be strong and true to yourself. Listen to yourself.'"

Which we have done. And with that, Molly J. agrees it might be time to switch off – my tape recorder, that is.

Molly Johnson appears in concert at Massey Hall in Toronto on Nov. 30.

It’s jazz on a scale that suits the music 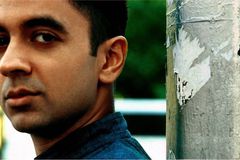 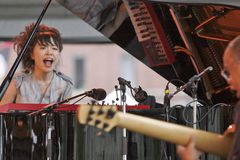