Through the power of her imagination, the depth of her curiosity and the warmth of her heart, Tafelmusik's double-bass player Alison Mackay has created a series of celebrated multimedia concerts over the years, using text, images and music, which the organization has toured around the world. Explorations of Galileo, of Bach, of the seasons, of the relationship of Arabic and Western cultures, Mackay's creations always push the boundaries of traditional concert-going toward new levels of meaning that music by itself can seldom achieve.

But Mackay's latest creation, Visions and Voyages, may be her most difficult artistic challenge yet, as Visions and Voyages is not set primarily in the 17th- and 18th-century Europe that is Tafelmusik's musical bread and butter. It is set in Canada – specifically the Canada between 1663 and 1763, between the establishment of Canada as a French royal colony and the establishment of Canada as a wholly British possession. And not only is Mackay trying to tell this story from a Canadian perspective, but she's trying to tell it from an Indigenous perspective as well, using the music of Handel and Lully and Couperin and Purcell and Marin Marais to do so, the great French and English composers of the period. That she manages to pull it off is a testament to her burning clarity of vision, to her unswerving devotion to her goal.

Not that everything worked successfully. Mackay tells her story through excerpts from newspaper accounts, official papers and proclamations read by narrator (and Métis actor) Ryan Cunningham, supplemented by projected slides and movies. When the story moves to Europe, the music Tafelmusik expertly plays along with the narration makes perfect sense, illuminating the spoken word beautifully. But when the story moves to Canada, to accounts of meetings between French and native leaders, film clips showing the sweet dam-building techniques of beavers or the construction of a birchbark canoe, Lully and Marais seem strangely dissonant and otherworldly. Especially when the focus is trained pitilessly on the unending catalogue of vile behaviour that characterized European attitudes toward native populations, music of the high baroque is a very unwelcome guest.

But it's never over until it's over with Mackay, as I have learned over the years. As the story finally moved, as it must inevitably, to the cold-blooded recitation of the all-but-genocidal philosophy of residential schools, and narrator Cunningham read the contemporary poetry of Ojibwe writer Armand Garnet Ruffo, dancer Brian Solomon took the stage. Solomon is of Irish and Anishnaabe descent, and as the orchestra played music of Rameau, Solomon created a series of images that burned into the audience's imagination. In a frenzy of pain, he grabbed the music off the music stand of one of the players with his teeth, so that the music first blinded, then suffocated him. He grabbed the stand itself to use first as a paddle for an imaginary canoe, and then as a yoke binding his arms. Finally, he grabbed a violinist's bow and turned this utensil of music into a utensil of violence, demonstrating, in an instant of revelation, the irony, the confusion, the complexity of the entire evening.

You don't really expect an evening of contemplation about the meaning of Canada and its Indigenous peoples from a baroque orchestra. But Visions and Voyages provides it, and provides it with skill and passion. If anything, even with its faults, perhaps because of them, Visions and Voyages reminds us that, in this Truth and Reconciliation world, those of us who inherited these crimes, and the responsibility for them, have to move beyond truth to understanding – a different and difficult process – before reconciliation can be really put on the table. 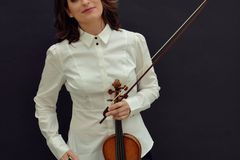 Tafelmusik announces Italy’s Elisa Citterio as new music director
January 26, 2017
Follow us on Twitter @globearts Opens in a new window
Report an error Editorial code of conduct
Due to technical reasons, we have temporarily removed commenting from our articles. We hope to have this fixed soon. Thank you for your patience. If you are looking to give feedback on our new site, please send it along to feedback@globeandmail.com. If you want to write a letter to the editor, please forward to letters@globeandmail.com.
Comments