At a preconcert meet-and-greet in 2013, Colorado radio host David Mueller did what many another DJ, promoter or recording exec has no doubt done before him: he groped the talent. Mueller's miscalculation – and it was a large one – was that his target in this case was not some aspiring young singer who couldn't afford to challenge an older man who might be instrumental in advancing her career. No, the talent was already one of the most powerful pop stars in the world: Mueller had groped Taylor Swift, who won her assault lawsuit against him Monday.

Sexual harassment is often a crime about power, enabled in workplaces where there's an imbalance between men and women. Showbiz, in particular, is rife with situations where women who are being marketed partly for their looks and their youth are vulnerable to the unprofessional assumptions of senior male colleagues who control the business. Even the oddly impersonal term "talent," the standard term to describe both actors and singers, speaks to a situation where artists, whether they are obscenely coddled or roughly exploited, are seen as products rather than people.

If Swift got a rapid decision against Mueller from a Denver jury, obtaining legal vindication where so many women have previously failed, it was partly because her heft in the music industry is so much greater than his. She is not some nobody whom a clever lawyer could characterize as unreliable, attention-seeking or mercenary. In this case, her celebrity counted for a lot.

Yes, Swift had many other things going for her, too, as she countersued Mueller for a symbolic $1 for assault and battery after he had sued her, alleging she had got him fired from his job with a Colorado radio station. The case was a civil one, where the standard of proof in both the United States and Canada is significantly lower than in a criminal trial: Swift's lawyer had only to show that, on a balance of probabilities, Mueller had grabbed the singer's bum as they posed for a photograph, not prove him guilty of assault beyond a reasonable doubt.

She, judging from media accounts of the brief trial, acquitted herself admirably on the witness stand with a firm and unwavering account of an encounter during which she said Mueller put his hand under her skirt, grabbed her flesh and held on as she lurched away from him toward another woman standing on her other side. (In the photo taken at the time, she is smiling but leaning away from him. His hand is hidden by her body but positioned well below her waist.)

It also helped Swift's case that she didn't start the legal fight; Mueller had launched it by suing her, alleging she cost him his job and maintaining that his position during the shoot was awkward but that he did not touch her buttocks. After the shoot, she had told her mother and photographer what had happened; her mother had complained to the radio station's representative; the station had fired Mueller. But last week, the judge in the case found there was no evidence that Swift had directly intervened with the station, while the jury then rejected Mueller's claims against Swift's mother, Andrea, and the radio rep, Frank Bell.

And it probably didn't hurt Swift that six of the eight jurors were women, more likely to have direct personal experience of the unwanted-male-hand syndrome.

Yet also, in a case of he-said-she-said, Swift's power and popularity gave her the credibility that carried the day: after a string of verdicts that seem to tell women there's just no point complaining about sexual assault – the Jian Ghomeshi case in Canada; the Bill Cosby mistrial in the United States – a jury chose to believe Swift over Mueller. She was exposed to the same insulting line of questioning that so often marks these cases: Mueller's lawyer asked her what she might have done differently during the photo-op and wanted to know why the front of her dress wasn't disturbed by the incident. She tartly replied, "Because my ass is located on the back of my body." She triumphed over the shaming.

Swift certainly acknowledged her privileged position in the case. She sought no damages from Mueller but has pledged to give an unspecified amount to groups working with victims of sexual assault. Perhaps the greatest gift she could offer she has given already when she refused, in the courtroom, to be guilted about Mueller's fate. She told his lawyer: "I'm not going to allow you or your client to make me feel in any way that this is my fault because it isn't … I am being blamed for the unfortunate events of his life that are a product of his decisions and not mine."

It may come as a horrible surprise to Mueller that what was probably just the thoughtless exercise of his traditional privilege could destroy his career. Just as it probably came as a surprise to a young Ontario Hydro engineer that his employer might try to fire him for harassing a Toronto television reporter in the street in 2015. Yes, the price for appalling misbehaviour toward women has gone up. In the Swift case you hope the message rings through the music industry loud and clear that the days when you can casually paw the young women around you are long over, and that complete professionalism is required in the many social situations the business produces. She may be talented, but she's not just "the talent." 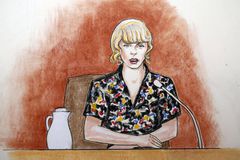 Man apologizes after kissing female Radio-Canada reporter on live TV without her consent at Osheaga
August 7, 2017
Google fires employee behind anti-diversity memo
August 8, 2017
Follow Kate Taylor on Twitter @thatkatetaylor
Report an error Editorial code of conduct
Due to technical reasons, we have temporarily removed commenting from our articles. We hope to have this fixed soon. Thank you for your patience. If you are looking to give feedback on our new site, please send it along to feedback@globeandmail.com. If you want to write a letter to the editor, please forward to letters@globeandmail.com.
Comments