A young Edmonton musician's dream has been put on hold, a victim of toughened U.S. controls on the trafficking of ivory. Taddes Korris, a Canadian double-bass player studying orchestral performance in Manhattan, cancelled his Monday audition with the Winnipeg Symphony Orchestra out of fear that his expensive ivory-tipped bow would be confiscated at the border upon his return to the United States.

For Mr. Korris, the choice to forgo the audition was an agonizing decision. "The last two months of my life have been spent preparing for it," he said from New York, where he is a masters student at the Manhattan School of Music. "It feels awful, but I just couldn't take the risk of having my bow seized. I spent a lot of my savings on it, and to a musician the bow and your instrument is like a child to you."

Mr. Korris's predicament arose because of the Obama administration's recently announced strategy for combatting wildlife trafficking. In February, it was announced the U.S. Fish and Wildlife Service would implement a ban on commercial trade of the ivory from the tusks of African and Asian elephants. There are exemptions available for musicians, but Mr. Korris, 25, was wary. "I have the advice of numerous bow makers," he said. "They told me that if there's any speculation you have ivory, this is not the time to travel."

Antique bows were often made with a small piece of ivory that clamps the bow hairs onto the wood. Mr. Korris's, which dates back to the 1950s, was made by Vincenzo De Luccia, an Italian-born luthier who worked in Philadelphia from 1901 until his death in 1966. Given its vintage, the bow would be exempt from the ban, as the ban does not apply to instruments containing elephant ivory imported before 1976. Proving that qualification is problematic, however, as the dating of instruments is an inexact science.

Mr. Korris is among many not tickled with the ivory ban. U.S. antique dealers, for example, are in a bit of a checkmate if they attempt to move their ivory chess pieces without the proper documentation. Guns with ivory inlays are also a target, as are guitars featuring ivory pegs and bridges. Country star Vince Gill, for example, has expressed concerns over touring with his antique guitars and mandolins.

The Winnipeg Symphony Orchestra, the ensemble for whom Mr. Korris was to audition, is itself in a state of worry over the regulations. On May 8, the orchestra is set to perform at Carnegie Hall as part of the annual Spring for Music festival. According to Jean-Francois Phaneuf, the WSO's director of artistic operations, the ban is causing a "huge headache" due to the increased paperwork involved. Because some of the orchestra's instruments contain ivory, it is uncertain whether or not they would be confiscated upon entry into the U.S. "The timing of the new regulation is horrible," Mr. Phaneuf said.

For the appearance, the WSO is to give three Canadian pieces (including R. Murray Schafer's Symphony No. 1) their U.S. premiere. Moreover, according to Mr. Phaneuf, some 600 Manitobans are set to fly into New York to attend the concert. "For many of our musicians," he said, "the Carnegie concert is the most important performance of their life."

According to Craig Hoover, chief of the Wildlife Trade and Conservation branch at the Fish and Wildlife Service, regulations that govern the movement of instruments have been in place for decades. "There is a lack of awareness about this within the musical instrument industry," he said. "We've been trying to accommodate their concerns, but people need to be aware of the conditions."

As for Mr. Korris, the elephant in the room is the question of why he wouldn't simply bring a bow with a synthetic tip for the audition, or borrow an ivory-fortified one upon arrival in Winnipeg. In that way, when he returned to the U.S. he wouldn't be carrying any possible contraband.

But according to Mr. Korris, who has performed as substitute member of the Edmonton Symphony Orchestra, it is not as simple as using another bow. "Each one responds differently," he said. "With an audition you're playing under such scrutiny, and if you have a different element to worry about, it can completely undo you." 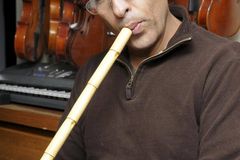 How Asian demand has driven Africa’s elephants into their worst crisis ever
Subscriber content
August 30, 2013