The photographer is shooting a peculiar subject, Bob Wagner, whose stage name is Mr. Bob. Mr. Bob is tanned, animated and retains a virile presence despite being nearly 71 years old. He loves Elvis Presley's music, is extremely charming – and competes in air-guitar contests. "Give me something with a beat," Mr. Bob asks the guy at the stereo behind the bar at Toronto's Cadillac Lounge, something of a leopard-skinned shrine to the King. The song kicks in: It's Heartbreak Hotel and Mr. Bob, wearing shades, a dark cap and a formal, white morning coat, gyrates to the rhythm and manipulates an invisible guitar as he strikes poses for the photographer. He's locked in and feeling it – the spry, septuagenarian who'd never heard of air guitaring until two months ago has found a new place to dwell.

After the photo shoot, Mr. Bob takes off his sunglasses and sits down to chat over coffee. We talk a little about him – he ran a scuba-school business and a travel agency in the Caribbean for 25 years – and a little about Elvis, the rock 'n' roll icon he first came across on black and white television as a teenager. "I was overtaken by him," Wagner says. "I had never seen anything like him. The images and the music penetrated me, and I never met him my entire life."

Toronto's Wagner has, by his own count, 140 Presley songs in his repertoire. The one he uses for air-guitar contests, such as Thursday's Canadian championships at Toronto's Mod Club Theatre, is Got My Mojo Working, a hustling blues number popularized by Muddy Waters in 1957 and later recorded by Presley.

It's an appropriate song for Wagner, who relies on charisma and passion, not acrobatics or crazed faux shredding, to woo the air-guitar judges. Competitors are judged in categories that include technical merit and miming ability (the accurate reproduction of fretwork and chord striking), as well as showmanship, originality and the most subjective criterion, "airness," which is the ability to be taken over by the music and to achieve art beyond simple simulation.

When Wagner's mojo is working, it is the airness and his passion for the sounds that wins the day. "The crowd is blocked out, I don't see anyone," says Wagner, who qualified for this week's nationals by placing in the Top 5 at last month's Toronto qualifier at Lee's Palace.

"The only thing I'm hearing is my song, and my insides telling me what to do."

Wagner is retired now, but when he was running his travel and diving business he often hosted "broomstick parties" in Tobago.

The events were similar to karaoke parties, except a broomstick was used as a substitute for an actual guitar. Because Wagner had been employing broomsticks to mimic the moves of Elvis's guitarists for years, the imaginary axe was easy for him to grasp, so to speak.

If air-guitar shows specifically are new to him – he learned about the championships when he saw an ad for the contests in the weekly Now magazine – Wagner sees the general notion as natural. "When you watch a person listening to music they love, their fingers are going to tap and their toes are going to move," he says. "And if you're not inhibited, the air guitar is an extension of that."

Wagner is confident of his chances to win the Canadian title and advance to the world championships next month in Finland – "I'm already packed" – but the community among air guitarists is more important to him. "There's camaraderie. We encourage each other."

Moreover, Wagner has revived his old broomstick parties by inviting friends over to his place to listen and mime along to Presley music. "I used to be lonesome in my apartment, and now I have a ton of new friends to invite over," he says, his cloudy blue eyes twinkling. "I've wanted to do that for years."

For Wagner and his friends, then, to air is human and to shred is divine.

Ten things we learned about Canadians at Edgefest 1
July 2, 2014 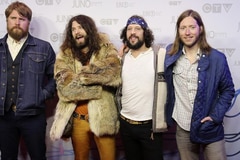 Three reasons Freddie Mercury might approve of Queen + Adam Lambert (and one reason he might not)
July 14, 2014 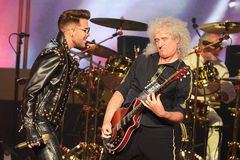 Feeling the blues, Black Keys new album will make you hit ‘replay’
May 9, 2014 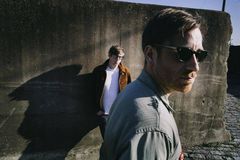