Once, many years ago, as a very young arts journalist, I asked superstar performer Pinchas Zukerman about the glamorous life of an international violin soloist.

"Glamorous!" he snorted. "Here's what I can tell you about my glamorous life. I can tell you that the baggage carousels are a long walk from the taxi stands in the Narita airport in Tokyo. That the duty-free shops are excellent in Schiphol airport in Amsterdam. That Chicago's O'Hare is a nightmare. Here's my life. I arrive in a new city. I go to the hotel, then to rehearse with the orchestra. I'm playing one of the same four concertos I always play – the Beethoven, the Mendelssohn, the Brahms, the Tchaikovsky. I play the concert. Go to the postconcert reception. Go back to the airport, get on a plane and do it all over again."

I tell that story to current violin superstar Gil Shaham, who will be in Toronto at Koerner Hall on Wednesday, performing the Prokofiev Second Violin Concerto. He laughs. "I love those four concertos," he says. He'd better, because he'll be performing them many times over the next few years. But Shaham, now 44, has taken many steps to ensure that his "glamorous" life as a violin superstar isn't one airport after another. For one thing, he has cut back the number of concerts he does a year, to about 50, and he often travels with his wife, violinist Adele Anthony. Balancing home and career, family and profession, is very important to him.

Shaham has also been both assiduous and creative in expanding his repertoire beyond the "four horsemen" of the violin concerto repertoire. He's recorded and performed Bach's solo works for violin, has added the Bach violin concertos to his repertoire, is involved with mutimedia projects and generally tries everything he can to amplify his music-making.

One of Shaham's most interesting ventures is his 30s project – performing and recording the astonishing number of violin masterpieces written in the decade of the 1930s. "Well, actually not in the '30s," Shaham reminds me, "but in an eight-year span, from 1931 to 1939. That period gave us concertos by Berg, Prokofiev, Stravinsky, Schoenberg, Bartok, Szymanowski, Britten and many, many others. Basically by 90 per cent of the great composers of the 20th century. It's truly remarkable." (The Prokofiev Second, to be performed on Wednesday, was written in 1935.)

Asked what he thought explained this explosion of activity for the violin in that most dangerous and malevolent decade – the decade of nazism and Stalinism – Shaham pauses. It's a question he's been asked many times, and for which he doesn't have a definitive answer. Finally, he says, "Maybe it's the power of the single voice – the single lone voice speaking out, crying out, standing in for the individual, at a moment in our common history when the individual was so thoroughly ignored and debased. Maybe all these composers, individually, felt the need to express that sense of lonely identity."

Shaham's latest foray into the musical beyond is his teaming up with Eric Jacobsen and the Knights, a wonderful, eclectic orchestra and performing arts ensemble based in Brooklyn. The Knights backed up Shaham's latest recording of the Prokofiev Second, and will be with him in Toronto. "There's something precious about playing with a group that's so dedicated and committed to their art," Shaham says. "They're a truly fearless ensemble."

I'm tempted to tell Shaham that it can be a long walk from the baggage carousels to the taxi stand at Pearson, depending on which terminal you use, but I think better of it. He's an artist and musical pioneer who has managed to move beyond the straitjackets of the past, without losing any of the creative spirit of those who have gone before him.

Gil Shaham and the Knights appear at Koerner Hall in Toronto on Wednesday with a program including Prokofiev, Wagner and Sufjan Stevens. 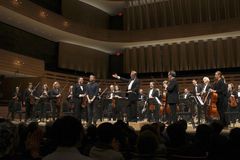 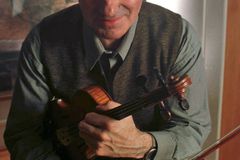