Great art can break out anywhere, any time. As it did on Friday night in the rather unlikely venue of the Enoch Turner Schoolhouse, courtesy of The Canadian Art Song project. The chapel in the restored schoolhouse resonated (sometimes a little too powerfully) with greatness, as baritone Phillip Addis and accompanist (and partner) Emily Hamper provided a stunning, powerful evening of song, based on the theme of The Pilgrim Soul.

Phil Addis last appeared in Toronto in Barbara Monk Feldman's Pyramus and Thisbe, and is performing regularly around the world, but the overwhelming beauty and power of his silky, yet effective, baritone has seldom been heard to greater effect. Both Addis and Hamper were battling illness, we were told, and Phil's glassy-eyed, otherworldly concentration was testament to his artistic dedication and gutsiness. Despite his illness, Addis's voice provided beauty and interest in all its ranges, from its deep, dark bottom register to the full-voiced, ringing top.

The Addis/Hamper program was an intriguing mix of Canadian and non-Canadian repertoire, with an arc and shape based on its theme that gave an extra added dimension to the program. A beautiful first half began with a setting by Canadian Chester Duncan of a poem by A. E. Housman, and ended with a lovely three-part song cycle In Search of Eldorado by Torontonian Larysa Kuzmenko, to poetry of Poe.

In between the two was a superb, grief-filled rendering of Gustav Mahler's Songs of a Wayfarer, a bittersweet journey between elation and despair that portrays the inner turmoil of a wandering emotional soul, torn between love of the world, and the loss of a personal love. Addis was powerful and expressive in the four songs, moving back and forth between its emotional poles skillfully, and Hamper provided Addis with sympathetic and pointed accompaniment to accentuate and complement his performance.

But nothing in the first half of the concert, as excellent as it was, could prepare us for the extraordinary tour de force of the second half, Addis's hypnotic, dramatic, wrenching reading of Domenick Argento's The Andrée Expedition. The Andrée Expedition, in keeping with the Pilgrim Soul theme, is a mini-opera for a single voice that tells the tale of an ill-fated nineteenth-century Swedish attempt to navigate a hot-air balloon over the North Pole, ending in unspeakable tragedy, and told entirely though the letters and notebooks of the expedition's three members, discovered 35 years after their deaths. For the 40 minutes plus of Argento's drama, Addis was mesmerizing, alternately joyous, buoyant, fearful and eventually despairing as the expedition meets its cold, inevitable end. Hamper was also at her best in illuminating the many moods and tone pictures of the cycle, from the chill of the ice and the air to the depiction of elation and hopelessness contained in the texts Argento chose for his piece. There we were, ostensibly in this restored Toronto schoolhouse, some of us sipping on wine and eating munchies (supplied by the Canadian Art Song Project), but, in fact, due to the power of Addis's art, feeling our bones being chilled, our idealism turning to despair, our lives petering out in sickness and gloom, as surely as the doomed Andrée, Fraenkel and Strindberg.

It's becoming a commonplace for me to note, I discover, the excellence of the performances I review in Toronto's classical scene, whether at Roy Thomson Hall, the Four Seasons Centre, or the Enoch Turner Schoolhouse. When performers of the calibre of a Phil Addis and Emily Hamper are what we can expect as routine fare in this city, then the "routine" has taken on a new meaning altogether.

The ‘glamorous’ and creative life of a superstar violinist
February 16, 2016 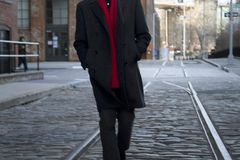 TSO stages a fascinating drama within a drama with Mozart’s Requiem
January 22, 2016 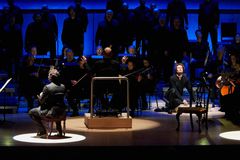 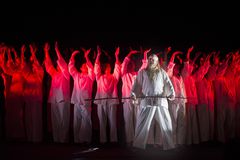