'We're a band. We're hired for parties," the singer says. "We have to know what to do."

The Tragically Hip, total pros, took over a Kensington Market resto-bar for four days last week, performing a series of short-burst sets and amiable meet-and-greets with fans to launch the band's resurgent 12th album, Now For Plan A. On Monday, Gord Downie and the drummer Johnny Fay ("the heart of the band," according to Downie) sat down for an interview, in between the music.

I ask them about a line – "If I had a wish, it'd be more of this" – in the record's most melodic song, Done and Done. To what does the "this" refer? "I'm in a career band," says Fay, youthful in the face but with short, greying hair. "I'm the luckiest guy in the world."

Adds Downie, "I'm grateful for the friendships and being able to show it, for people's dancing pleasure."

Downie's own dancing pleasure is what he likes to call "economy in motion." It's something he's been working at. Onstage minutes earlier, he fronted the still muscular five-piece, fast friends since high school in Kingston. Downie, 48, does not prowl the boards as he once did. The long hair is long gone; a black, wide-brimmed fedora casts him as an eccentric country gentleman. Or a character actor: "A menacing Dabney Coleman," he will tell you.

He imitates no one, and as he grips the microphone stand with one hand, and gestures and points with the other, he is an effortless performer in close quarters. "I'm agile," he says later. "I can play on the ass of an elephant. That's the goal – then you can play anywhere."

During the set, the band (including bassist Gord Sinclair, lead guitarist Rob Baker and rhythm guitarist/counter-vocalist Paul Langlois) had played We Want to Be It, the titular refrain being one of the record's themes. The idea that Downie and the band don't want to do the music so much as they wish to be the music is something that Downie recently figured out, inspired by a quote from the comic actress Madeline Kahn. It has something to do with existing in the moment, submerged and instinctively, not intellectually. "The moment is wild," he later explains. "It's chaotic, it's happening as we speak, it's already past. It's all that great stuff."

Does the performer force the moment? "No," Downie says, between sips of a pint glass of pale ale. "The performer has to warm up to it, preferably quickly."

We Want to Be It, classic lean rock from the Canadian-rock kingpins, address a relationship – romantic, or possibly musical. "And all our friends gave us a week, and we're still happening as we speak," it goes. One of the charismatic qualities of the Tragically Hip is the shared endurance – the quartet has maintained its original membership since the beginning, sharing 14 Juno awards since 1983. The continuity doesn't make them a heck of a band, but it is an important element of what they're trying to accomplish. "We began playing in Robbie's living room, which was about the size of this room," says Fay, referring to the narrow front lounge in which we speak. "We had no idea we could go to the Terrapin Tavern and play gigs. And we had no idea we could still be doing it now."

Downie, the poet and Dora Award-nominated dance composer, is more pointed and less wide-eyed on the band's stamina and arc. "I think you have to show people it's cool and fun to work together. It's your obligation. If you can't do it, who can you expect to do it?"

Before the band reconvenes onstage for the next set, Fay tells a story about Downie skipping out on a high-school basketball game because of a gig. The coach told Downie that he would need to make a choice. "He chose music," Fay says.

As did the Tragically Hip. Years later, they're much too old for any other career; they really must stay with the music. With that being the case, why not together?

Balancing writing with his wife's cancer

"Writing became a real dilemma ... I didn't want to do it. I didn't see the point in doing it, really."

Famously tight-lipped about his private life, singer-lyricist Gord Downie recently opened up about the inspiration behind some of the material of Now For Plan A, the Tragically Hip's latest album. During the writing of the record, Downie's wife was diagnosed with breast cancer.

"It's me, trying to help, mutely, in that way a man around breast cancer tries hard to help," Downie told Wendy Mesley, on Sunday's broadcast of CBC's The National, referring to the songs Man Machine Poem and The Lookahead.

Though his wife asked him not to make a "cancer album," the event could not help but affect the writing. Downie questioned whether his initial work on the record was reflecting his love and fear and devotion for his wife and friend – using his writing, he explained, as a place to be "ample and grateful" to loved ones.

"Nothing was cutting it, in that regard. Anything that I had done up to that point didn't seem applicable, somehow."

In time, however, his wife's illness gave him direction. "It cleared my mind. ... It focused my attention. It was really hard to do, and I didn't like it or enjoy it, necessarily. But when I found something that spoke, I knew it."

New Tragically Hip, and other songs worth a listen
August 27, 2012 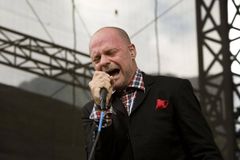 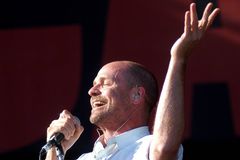 Tragically Hip defiantly in the now ...
May 12, 2009
Follow Brad Wheeler on Twitter @BWheelerglobe
Report an error Editorial code of conduct
Due to technical reasons, we have temporarily removed commenting from our articles. We hope to have this fixed soon. Thank you for your patience. If you are looking to give feedback on our new site, please send it along to feedback@globeandmail.com. If you want to write a letter to the editor, please forward to letters@globeandmail.com.
Comments