The years go by, the game circles and we still catch dragonflies inside a jar. On June 17, 1968, Joni Mitchell made her debut at the Troubadour, a famed music club in West Hollywood. At that point in her career, Mitchell had written songs that were hits for others, but had yet to make her mark as a performer. Last Friday, June 12, the rising-star Toronto singer-songwriter Tamara Lindeman (a.k.a. the Weather Station) made her own debut at the Troubadour, nearly 47 years to the day Mitchell played the same venue. For the Globe, Lindeman (whose elegant new folk-pop album Loyalty was released last month) wrote of her night on stage, her nerves and being a part of the music business that doesn't change.

The Troubadour stinks. When security pries open the doors for the load-in, it's like a tomb being opened. That smell, the same the world over, of a bar – stale beer, sweat, Lysol. It's dark and windowless, with a vaulted wooden ceiling almost like a barn, wood panelling everywhere. Empty, it looks tiny.

This is where Joni Mitchell made her Los Angeles debut in 1968. It's also where Buffalo Springfield played for the first time. It's where the Eagles hung out, where Carly Simon met James Taylor. It was also the haunt of Guns N' Roses. So, heavy with history, but it's also just a bar – a bar where there's a "no firearms policy" and a motley crew of security guards.

During my performance, I joke that if this were Europe, the Troubadour would be a museum. Attendance would be free and there would be placards on every wall. "But this is America," I say. "You don't do that in America." Everyone laughs. It's true, though. This is an institution.

On stage, I'm nervous. I've played a hundred shows solo, but it's still terrifying, every time. A band show has the momentum of a train – no matter what, it's going to go somewhere. A solo show has all the momentum of a tumbleweed. Anything can happen, and it's all on you. I tend to fixate on technical problems: Is my capo tightened properly? How is my guitar reacting to the air conditioning?

Sure enough, taking the stage and plugging in my guitar (a Kay model from the early sixties, surely at home in the Troubadour) feeds back for no apparent reason. I struggle through the first song before the problem is solved. A woman calls out, "You're doing great, honey!"

But by the second song, I'm on. I don't care any more, and I'm having the best time. I pictured this show with so much reverence. I thought it would be so serious, so heavy – the Troubadour … But instead, it's a funny, almost raucous show. The audience is at my feet, responsive, shouting out encouragement. I can tell people know my new record, which is amazing to me.

The Troubadour is a shallow room. It holds 500, but the distance between the stage and the back wall is only about 15 metres, if that. Instead, it's tall and oblong. You can't get any distance from an artist or a band. You're standing at their feet, or you're looking straight down at them from the dark, no-frills balcony. Perhaps this is the secret of the place: the intimacy.

I don't think of Joni Mitchell that often, but I do this night. I read a review of her first show there in 1968 – positive, but not particularly so. "She proved herself emotionally and stylistically impressive in her approach to her own numbers," wrote Stephen Braitman of the Valley News. There is no hint of the obsessiveness that has accrued around the show (and her) in the years to come.

Tonight, for me, there's no jackpot to win. I already have a label and a booking agent. It's not the big time, but things are happening. I see a guy wearing my U.S. label's T-shirt in the audience and I heckle him. "Are you an A&R rep from Paradise of Bachelors? Am I gonna get signed?" He laughs. I'm already signed. The T-shirt he wears is a drawing of a long-haired dude smoking a giant cigar. Beneath, the caption reads, "It's a shit business."

And it is. Still.

I came here once, 10 years ago. I was in L.A., and bought a ticket to see the Canadian indie-rock band Stars. When I opened the ticket, I was shocked to see, in tiny letters, "Feist." Leslie Feist's album Let It Die was blowing up in Canada, but in the United States she was an unknown quantity.

I stood there rapt, in a packed crowd, and watched everyone around me fall in love with her. Later on, an acquaintance of mine, who was pals with the band, introduced us. Feist turned around, and extended an impossibly elegant hand. "I'm Leslie," she said.

I was 20, a huge fan, and I couldn't have been more star-struck. It was the moment when it occurred to me that maybe I could be in a band – part of the crew hanging around the upstairs green room. I wanted that more than anything. It took me 10 years, but I made it happen. 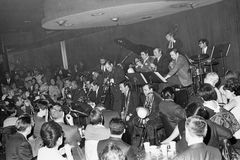 Fan-friendly Field Trip more than just a music festival
May 15, 2018 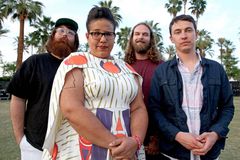 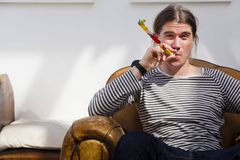