A forthcoming album from the bombastic English rockers is apparently to be titled Queen Forever. After 40 years in the business and after improbably surviving the loss of iconic singer Freddie Mercury in 1992 due to complications caused by AIDS, "forever" seems like a more approachable goal than ever. With the former American Idol runner-up Adam Lambert playing queen for the day as the band's featured touring vocalist these days, the flashy troupe gave an extravagant, high-energy, old-fashioned arena rock show to a sold-out, whipped-up Air Canada Centre audience on Sunday. Would Freddie Mercury, who sang Who Wants to Live Forever, The Show Must Go On and "goodbye everybody, I've got to go," endorse the 2014 edition of Queen and its glam-rock reviving pomposity? Here are three reasons why Freddie Mercury might approve of Adam Lambert and the dowager Queen, and one reason why he might not.

1. On the night after "supermoon," Adam Lambert didn't try to produce Mercury rising. Instead, for his first costume situation, he reached into the closet and pulled out a retro George Michael look, complete with shades, a dark shadow of facial scruff and studded black leather garb. Vocally, Lambert doesn't possess the richness of Mercury, but his swagger comes naturally and the agile tenor didn't miss a note all night, swooping easily up to high places when required. The first four songs – Now I'm Here, Stone Cold Crazy, Another One Bites the Dust and Fat Bottomed Girls – hit hard and relentlessly. Tushy ladies may make the "rockin' world go around," as Lambert asserted, but a bluesy backbeat doesn't hurt either.

2. Mercury might not recognize what passes for rock 'n' roll today. Oh, bands still rock convincingly enough, but somewhere along the way the roll was lost. As well, squealing guitar solos – a staple in the day – are long passé. Nobody told original guitarist Brian May, a virtuoso with a taste for stomps, chugs and solo flights, and nobody told a bluesy rhythm section that included bassist Neil Fairclough and original drummer Roger Taylor (with his son Rufus Taylor on drums and percussion). Also, all manner of solos happened – an old-school indulgence that Mercury would recognize. At one point, on the B-stage, the astrophysicist May spoke about how travelling at the speed of light would produce a trip that might seem like it took no time at all to an astronaut, but would actually eat up a hundred years of earth time. Later, during an interminable solo by May (who played various over-driven melodies against a starry backdrop on the giant, circular screen behind him), I knew just what he meant.

3. Though the sexual inclinations of Mercury were a source of intrigue, the openly gay Lambert lives and works in a much more liberated age. A showman who we can euphemistically describe as flamboyant, for Killer Queen, Lambert reclined on a regal half couch, with a bottle of champagne in one hand and a hand-fan in the other. He cheekily played with the line "guaranteed to blow your mind," but turned more serious about all of us of looking for ways to fill our emptiness as we searched for "somebody to love," which is also the title for a gospelish hit track off Queen's A Day at the Races from 1976. Later, for the triumphant, anthemic encore set of We Will Rock You/We Are the Champions he appeared with an effeminate crown and a leopard skin get-up, just in case anyone still hadn't connected the dots.

4. Let him go. (We will not him go!). One wouldn't imagine the stylish Mercury condoning the gold-lamé blouse May wore for the opera buffa shenanigans of Bohemian Rhapsody, but, more seriously, would he abide parts of the original 1975 recording being used in a 2014 concert? A tape of Mercury's studio vocals and live concert footage were also used for the unplugged Love of My Life, though May and the audience sang most of it. Nice touches, but how much Mercury is required? On the wistful These Are The Days of Our Lives, Roger Taylor sang "you can't turn back the clock," and yet the home movies of the band in its youth were screened to sappy effect. It's a rock and roll show, not a Mercury tribute. It's also 2014, and about time the band moves on and calls itself simply "Queen" again, dropping the plus-Lambert tag. Mercury's legacy is assured; there's no need to continue the memorial. As the man sang himself: "If I'm not back again this time tomorrow, carry on, carry on, as if nothing really matters." 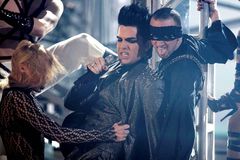