Pop and jazz giant Tommy Banks, who died last month at the age of 81, had the musical chops, credentials and connections to wow crowds anywhere in the world, but his heart belonged to Edmonton. He worked tirelessly to establish his city as a cultural hub within his many capacities as a pianist of international renown, conductor, arranger, composer, band leader, TV personality and politician.

In the late sixties, he got his first taste of television when CBC Edmonton was looking for someone to host a half-hour talk show out of Edmonton called Around Town. The host had to be knowledgeable, charismatic, eloquent and comfortable interviewing guests. With only 24 hours before going to air, production executives turned to Mr. Banks, who agreed to fill the position temporarily until a permanent host could be found. But it soon became apparent that Mr. Banks was the man for the job, so he kept doing it.

A year later, it was renamed The Tommy Banks Show and extended to a full hour. Seeing the show's success, the CBC brass wanted to broadcast it nationally and relocate the production to Toronto. But Mr. Banks remained adamant that moving was a no-go, insisting that the Edmonton crew had everything they needed to broadcast the show from there. So that is what they did. The Tommy Banks Show aired from Edmonton for several years and won a Gemini award.

In the late 1970s, Mr. Banks pitched an original concept to CITV (now Global): live performances with big-name stars would be televised to give home audiences the sense of being in a nightclub. Originally a hard sell, the pilot became In Concert, a series that was syndicated in 100 countries. He also hosted a show out of Vancouver, called Celebrity Revue.

During this period, when Edmonton was little more than a backwater, Mr. Banks imported a formidable array of talent. Ray Charles, Tony Bennett, Aretha Franklin, Tom Jones and Tina Turner performed on his show, sometimes accompanied by the Edmonton Symphony Orchestra (ESO). Under Mr. Banks's leadership, the ESO bloomed into an ensemble that easily embraced contemporary music, as well as classical.

The publicity put Edmonton in the spotlight and, perhaps more importantly, attracted investment. Mr. Banks and his wife decided they, too, would put money into their city. At various times they owned a booking agency, a fine-dining restaurant with entertainment and, briefly, a discount bookstore.

In the early 1980s, he went back to hosting a CBC variety show, now called Tommy Banks Live, which was on the air for three years.

In 1999, the city acknowledged Mr. Banks's boosterism by naming a street after him. Fittingly, the Yardbird Suite, a renowned jazz club he helped start and where he frequently performed, is now situated at 11 Tommy Banks Way.

The musical virtuoso sat on numerous boards, received honorary degrees galore, won a Juno for the recording of his big band performance at the Montreux Jazz Festival in 1978 and, in 1991, he was named an officer of the Order of Canada. If there was one thing he wasn't good at, it was retirement. Up until last year, he was still performing.

Upon learning of Mr. Banks's death, from leukemia, on Jan. 25 at the Grey Nuns palliative care facility in Edmonton, Prime Minister Justin Trudeau tweeted that Canada had lost a cultural icon.

Music producer David Foster tweeted from Los Angeles: "The world has lost one of the true musical greats, my mentor and dear friend. A gentleman and a gentle man." Ottawa's National Arts Centre lowered its flag. Mr. Banks had produced several concerts with its orchestra, including a 2009 tribute to another masterful pianist and composer, Oscar Peterson.

Always on the move, Mr. Banks and his quintet toured continental China in 1983, the first jazz group to do so since the beginning of the cultural revolution in 1949. Mr. Banks conducted symphonies around the world, directed musical ceremonies at international events, such as Expo 86 in Vancouver, and the 1988 Winter Olympics in Calgary, and produced or conducted command performances for Queen Elizabeth, Pope John Paul II, and U.S. president Ronald Reagan. He didn't sleep much.

"He was a cat-napper who lived around the clock," said long-time friend Ray Baril, a saxophonist and assistant professor of music at Edmonton's MacEwan University (formerly Grant MacEwan Community College). "We'd be in the CBC studio and wouldn't know where Tommy was. He'd be lying under a riser grabbing himself 10 minutes shuteye so he could get ready for the next thing," Mr. Baril said. "He was a man of cold coffee and cold pizza."

"I don't know how he did it," his friend Colin MacLean, a former CBC on-air personality said during an interview with CBC news. "He was a restless and creative spirit. He was many things. He lived many lives."

Maclean's magazine observed that it was easier to list the things Mr. Banks hadn't achieved than those he had.

Two projects Mr. Banks cherished were helping form the Alberta Foundation for the Arts and the acoustically magnificent Francis Winspear Centre for Music.

The central message of Mr. Banks's life was the importance of music to the human spirit, particularly children. Music, he believed, enriched the brain of children, enabling them to excel in other disciplines. As a tribute to his passion and dedication, in 2013, the Winspear Centre and the ESO launched the Tommy Banks Institute for Musical Creativity.

According to his daughter Jill, Mr. Banks didn't recognize obstacles. Problems were simply solutions waiting to be found. Known for being a good-humoured man, the band leader paid his musicians promptly and fairly and made sure their travel accommodations were decent.

While a student at MacEwan, music professor Dean McNeill came to know Mr. Banks, who was then-chair of the music program. Always humble, Mr. Banks gave credit to his predecessor for creating the program, saying he was "merely a caretaker." Prof. McNeill said he learned simply by being in the company of Mr. Banks. He remarked on his mentor's generosity. "As adjudicators at a music festival, we all received a per diem for food," Mr. McNeill said. "A group of us met for breakfast. Tommy told me I should pick up the cheque. I was young and nervous so I did what he said. The bill came to $30. That night he said, 'My turn to get the tab.' It was $300."

As his reputation grew, Mr. Banks was often asked to relocate to Los Angeles or elsewhere. His attitude was always, "We can do it here."

Thomas Benjamin Banks, the first of five Banks children, was born in Calgary on Dec. 17, 1936. His father, Ben Banks, a semi-professional musician, played at a radio station during an era when radio stations had their own orchestras. One of Thomas's earliest memories was accompanying his father to the job. His mother, Laura Banks, known to the public as Laura Lindsay, was a gourmet cook who hosted a homemaker's show during the fledgling days of television.

Music and entertainers filled the Banks home. In an Ottawa Citizen profile, Mr. Banks said he took obligatory piano lessons up to Grade 4, but stopped after the family moved to Edmonton in the late 1940s. He did, however, continue to play and learn on his own.

At the age of 14, Tommy dropped out of school to go on the road with a band fronted by tenor sax player Don (D.T.) Thompson. Reflecting on those early years, he said, "I learned how to handle myself on the road and be professional. I also learned about the music business. There's music. And there's business. You have to know about both."

While many parents would have been concerned about their son dropping out of school at such a young age to pursue a fragile dream, his parents were willing to go along with it largely because the band's gigs were on holidays and not too far from home. It was only when she learned that her eldest son was on his way to Toronto with the group that Laura Banks called the RCMP. They stopped the van and sent Tommy home. The band continued without him.

At 18, he was hired as musical director at Edmonton's Orion Musical Theatre. There he met Ida Heller, a model and singer from Medicine Hat. They married in October, 1969, and had three children. Despite a demanding professional life that included jingle writing, and acting in minor dramatic roles with the National Film Board and feature film productions, Mr. Banks always managed to set aside time for his family. He cheered on a grandson at hockey games and accompanied a granddaughter on piano while she sang at the Kiwanis Festival.

Helping his community by giving back was simply part of Mr. Banks's DNA and the reason he accepted Jean Chrétien's offer to become a senator. At first he thought the telephone call from the Prime Minister's Office was a prank. When he recognized Mr. Chrétien's voice he accepted the position immediately, without hesitation. It was one of the few times he undertook a major decision without first consulting his wife.

Mr. Banks served as a senator and sat on numerous parliamentary committees from 2000 until 2011. His colleagues in government were astonished at how easily he navigated an unfamiliar field. Two bills passed with his name on them. He said he enjoyed the Senate because he liked politics, as had his parents and grandparents. He left when he reached the mandatory retirement age of 75. As far as choosing between music or the Senate, he told a newspaper interviewer he preferred the freedom of music: "Writing a piece of music, you can write what you want and you alone are responsible for it."

As an homage to Mr. Banks, musicians travelled from as far away as Poland to take part in a 90-minute tribute at the Winspear Centre on Valentine's Day. A thousand people, representing Mr. Banks's multifaceted life, gathered at the venue to pay their respects. Mr. Baril said Mr. Banks preferred to deflect attention from himself, but he would have thoroughly enjoyed the two-hour jam that took place afterward in the lobby.

Prof. McNeill said Mr. Banks forever changed Edmonton's music scene for the better. "Everywhere you go in the city, Tommy's fingerprints are all over it."

Editor’s note: An earlier version of this story included a cutline that said Tommy Banks died in February. The cutline has been corrected 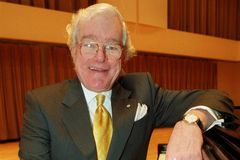