We all know that "football" means something different in Europe than in North America. But does the same hold true for "jazz"?

Americans are fond of describing jazz as the great American art form, and some partisans - Wynton Marsalis springs to mind - would argue that playing jazz depends on honouring certain intrinsically American musical qualities, such as swung rhythm and the vocabulary of the blues. And for decades, European jazz artists did just that. They may have brought other elements to the table, from Gypsy modes to Swedish folk songs, but the basic feel remained the same on either side of the Atlantic.

Not any more. As performances at this year's Festival International de Jazz de Montréal made clear, European and American jazz can seem almost worlds apart.

Take the Tomasz Stanko Quintet, which played Gesu, Centre de Créativité on Saturday. Using a quartet of young European players, with acoustic piano and drums augmented by Fender guitar and bass, they created a sound that was loudly electric and, thanks to the band's straight-eight rhythmic feel, generated a groove closer to new wave rock than hard bop.

Many of the tunes featured a unison melody, played by trumpet, piano and guitar, over drums, and a driving, droning, single note bass line, and when Stanko or pianist Alexi Tuomarila took the foreground, the results were often mournfully beautiful. Then again, the arrangements were so tightly bound to Stanko's elegiac melodies that there was often little room for improvisation. When the group did attempt a more traditional jazz approach, Anders Christensen's walking bass was stiff and unswinging, rendering the music a leaden lump.

Contrast that against what pianist Robert Glasper and trumpeter Terence Blanchard did in the same room the night before. Glasper is from Houston and Blanchard from New Orleans, and while their personalities are quite different - Glasper is a T-shirt wearing, hip-hop loving prankster, whereas Blanchard presents himself as a suit-clad traditionalist - they're equally at home with swing feel and the blues.

Although Blanchard showed his mettle through aggressive flurries of notes while Glasper preferred wit and rhythmic invention, they clearly spoke the same musical language (a different one than Stanko). Even when the sound was modern, as when Blanchard used a harmonizer to electronically his trumpet, the feel remained comfortably traditional.

The comfort of tradition is a big part of the American jazz aesthetic these days, even as it moves away from traditional jazz. Guitarist John Scofield's Piety Street Band isn't, strictly speaking, a jazz group. Bassist George Porter, Jr., drummer Terence Higgins and keyboardist Jon Cleary are New Orleans-based R&B players, and the group's material is largely drawn from gospel tunes, with a few party favourites thrown in. Yet however much the crowd at the Théâtre Maissonneuve on Saturday might have hankered for His Eye Is on the Sparrow or Motherless Child, the real kick was in hearing what was done with them - particularly by Scofield, who deftly augmented the blues guitar vocabulary with jazz harmonic invention.

Tord Gustaven's music is also song-based, but the Norwegian pianist's aesthetic has little to do with the blues, much less the rhythmic abandon of gospel music. Gustaven is a master of melancholy, and his tightly disciplined quartet understand how to bring an almost symphonic grandeur to Gustaven's melodies. Saxophonist Tore Brunborg's raw, vocalized phrasing was the perfect complement to Gustaven's tart, classically-inflected lines, but it was bassist Mats Eilertsen who stole the show with an arco style that evoked the baroque ornamentation of Indian classical violin playing. 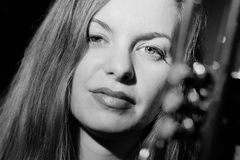