Everything is aglitter at the Great Hall in Toronto, where a years-in-the-making overnight sensation stands with eyes closed and hands on hips.

Sapphire-blue lights pretty up a small, smoky stage and a few oversized stars dangle from the microphone stands, but it's Valerie June in a sparkly, shiny jumpsuit that is in focus – smile on her face, thoughts to herself. As hypnotic southern music plays, she hums and dances like no one is watching, even though she knows all eyes are on her.

And she, a vision of satisfaction and elegantly tumbling dreadlocks, is something to see.

After years of anonymity, the Tennessee native was 31 years old and long of Memphis when she released her breakout 2013 album Pushin' Against a Stone, a moonlit walk of Appalachian sounds, country blues and gospel sweetness. She toured the record hard, drawing growing crowds on her own and sharing bills with the likes of the Rolling Stones and Robert Plant.

Coming March 10, her new album The Order of Time is mesmeric, refined and reflective. But while she sings serenely about "dancing on the astral plane in the holy water cleansing rain," the LP still jumps with celebrative blues rock (Shakedown) and charismatic exclamations (Got Soul).

On stage, she's singing one of her older numbers, a twinkling waltz about the comforts of home competing against the promising lights in the distance. "There's a tap on my window, there's a ring at my door," June sings in her distinctive flat drawl, "and I'll answer in Tennessee time."

The crowd sways and sings along. The late bloomer has arrived.

Nietzsche said that we should consider every day lost on which we have not danced at least once. Chuck Berry said he was going to learn to dance, if it took him all night and day. And June, upstairs at the Great Hall a couple of hours before the show, tells me I have only 30 minutes for my interview, because she needs to dance.

"That's how I warm up," she says, standing astride a chair in a spacious room with a hardwood floor and high ceilings. She's wearing leotards and has bare feet. "I dance before every show."

Clock ticking, we sit on a Queen Anne sofa in the grand room. "I feel like a queen," she says, before apologizing for her "mildew-y" clothes. She smells fine.

Asked about title of her new album, June explains that it's about life cycles and journeys. Her father (whose enthusiasm for gospel, R&B and Johnnie Taylor soul-blues was a big part of her musical upbringing) died in November. When she left the hospital that night she met a new baby nephew for the first time.

"So, there's this beautiful order of time," June explains, legs curled up. "Each little step means something."

The Order of Time's opening track is a dreamy country-soul look-back, Long Lonely Road. "We're always moving in time in our minds," she says. "Back and forth, from present to past to future."

June, in her early days in Memphis, worked multiple jobs for seven years, she says, saving a bit from each cheque to pay for the record she wanted to make. "Anything that's not illegal or degrading, I did it," she has joked in the past, about her side-job career. At some point, when she began feeling fatigued and fuzzy-minded, she was diagnosed with diabetes. Because she had no health insurance, the money banked for her album went toward doctor bills instead.

"It was devastating," she says.

Her health stabilized. June made two albums and one EP before the critically lauded Pushin' Against a Stone, produced by Dan Auerbach of the Black Keys. She has high-profile fans now, including Michelle Obama and Norah Jones. The velvet-voiced latter, a friend of June's, sings on the new album. "She's exactly the sweet, kind person I thought she'd be before I met her," she says. "We put people on a pedestal. And when they can actually stay up on that pedestal, it's cool. Do you know what I mean?"

June lives in Brooklyn now – "I moved there for love, and then I stayed there for love" – and describes her psychic place as "fearless." She talks about a succession of fearless moments that have added up to make her stronger. "I'm learning just how brightly I can shine," she says. "It's my own light. It's not like anybody else's, you know?"

The question is rhetorical, but June answers it on stage later. "You've been often misunderstood, tossed and tangled, in search of what's good," she sings on a good-time toe-tapper that closes the show. "But I got soul – I got sweet soul …"

She does, have soul. Probably always did, but things take time to be revealed. Dissident Russian artists try to break through ‘the zone of message control’
February 3, 2017 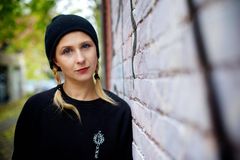