Leonard Bernstein called him a hero, John Adams sang his praises, and the accolades continue to pile up as Bramwell Tovey launched the Vancouver Symphony Orchestra's 95th anniversary season this weekend with the world premiere of a work performed by Dame Evelyn Glennie.

A conductor and composer renowned not just for his musical brilliance but also his great rapport with audiences, Tovey is a fierce cultural advocate and finessed cultural ambassador. He is a tireless promoter of Canadian music and will take on a worthy fight – while also taking cultural capitals by charismatic storm.

The VSO's music director turned 60 this summer, in between annual stints in New York (he's the founding host and conductor of the New York Philharmonic's annual Summertime Classics festival at Avery Fisher Hall at Lincoln Center) and Los Angeles (he's the L.A. Philharmonic's Principal Guest Conductor at the Hollywood Bowl, where he leads the summer classical subscription series).

It's been a good year. He was named to the Order of Canada, and the Canadian League of Composers and the Canadian Music Centre have just announced Tovey is this year's winner of the Friends of Canadian Music Award. He's getting a star on the B.C. Entertainment Hall of Fame's Star Walk. He was even BBC America's British Expat of the Month this September.

When offered congratulations on all the success, the maestro instantly credits his orchestra.

"You're not really anybody without the musicians who are standing in front of you. I make no noise. I'm very quiet, as you know."

Hardly. And this city is the better for it.

Tovey grew up in London's East End, where music was an important part of his Salvation Army family.

"I decided quite early on I wanted to be a conductor … but I kept it to myself because I was embarrassed about it," he says. "I didn't think I'd be good enough to be professional, probably because of the class thing."

Tovey's father Bernard, who left school at 14 and worked in finance for a concrete company, was a force in his life and musical education. He died of cancer at 48 in December, 1968.

The following week, Bramwell, 15, was at rehearsal with his youth orchestra. It was the morning after the Christmas concert and the orchestra leader asked if anyone wanted to try conducting. Tovey put up his hand.

"I came down and I conducted Shostakovich's Festive Overture and the orchestra of course had just played it in concert the night before and the thing just flew and it was an incredible experience. To have your first feeling of dropping the stick and hearing and feeling that power coming back, especially with your friends who are totally onside, it really was a Hollywood moment."

Tovey, who eventually realized the whole thing was orchestrated for him, was later accepted into the Royal Academy where his tiny cohort included Simon Rattle.

He began getting work – a lot of it with the London Symphony Orchestra. In April 1986, he was a last-minute substitute on opening night for a concert of works chosen by Leonard Bernstein. Bernstein himself was impressed.

"He is a great hero of mine now," said Bernstein of Tovey afterward. "I mean, I never met him before this morning but he's become one of the great people in my life." Bernstein then invited Tovey to attend his classes and rehearsals at the famed Tanglewood Music Center.

Tovey's migration to Canada started with a pivotal lunch with the LSO's then manager, Peter Hemmings.

"He said it's very important that you do these LSO concerts obviously, but what you really need to do is get your own orchestra and learn the repertoire and do it miles from anywhere so that you can make mistakes, which is what all young conductors have to do and very rarely do," recalls Tovey.

When the Winnipeg Symphony Orchestra offered him the position of music director, Tovey accepted. "Everyone in London thought it was a crazy idea, because Winnipeg was seen as being miles from anywhere, but I'd remembered what Peter had said."

One of Tovey's first orders of business in this country was a stop at the Canadian Music Centre, where he spent a week being introduced to the music of 67 Canadian composers.

The visit turned out to be fundamental in what would become Tovey's great Winnipeg passion project: the creation of the New Music Festival in 1992. Over ten years with the festival, Tovey says he conducted more than 250 world or Canadian premieres.

Among them: John Adams' Harmonielehre. Shortly after Tovey moved to Vancouver, Adams, here to conduct the orchestra, saw Tovey's picture outside and requested lunch with him. "I thought 'crikey, I didn't even know he knew who I was,'" says Tovey, who had never met Adams. Turns out Adams had seen a tape of the WSO under Tovey playing Harmonielehre at the 1992 festival. "It was the second ever performance and I wanted to tell you how wonderful it was," Adams said over lunch, Tovey recalls.

Tovey joined the VSO in 2000 and within a month learned that the organization was in financial trouble, with an accumulated operational deficit that would balloon to more than $1.5-million. Measures were taken and by 2003-04 the budget was balanced. The VSO is now using small annual surpluses to pay off what accumulated during those deficit years.

In the midst of this, the organization also launched the VSO School of Music, which opened in 2011.

It's another passion project for Tovey, whose three children all play music. One of them, Ben Tovey, plays lead guitar in the London-based metal band Rise to Remain.

"My son brought me some much needed street cred because I remember being with a couple of younger members of the orchestra in a bar one night and they asked me what he was doing and I said 'he's actually on tour with Iron Maiden right now' and suddenly I felt my own prestige shoot up accordingly."

Giving him street cred with his two teenage daughters, he says, is the Grammy Award he won in 2008 with the VSO and Brandon, Manitoba-born violinist James Ehnes. Tovey has also won Junos – for both conducting (the Ehnes recording) and composing. His Requiem for a Charred Skull won a Juno in 2003.

Other compositions include his opera The Inventor , with libretto by John Murrell, which premiered at Calgary Opera in 2011. He's thinking about a second opera with a comedic theme, and is working on two new orchestral pieces.

He is a tireless promoter of Canadian music, and outspoken in his cultural advocacy. When organizers of the Vancouver Olympics asked the VSO to prerecord music for the opening ceremony, Tovey balked. "I felt it was dishonest. I thought it was fraudulent," he told the Globe at the time.

He still rails against the public broadcaster for its changes to Radio Two. "I think the CBC has got away with murder over the last few years as they've completely dismantled their entire serious music output."

In five years, the VSO will mark its 100th anniversary season. And now, he is starting to think about what's next.

"At the beginning of the orchestra's second century, there will be somebody else at the helm," he says when asked about retirement plans. "And like everybody else, I'm very excited about who that will be, when the time comes."

The VSO is at the Orpheum in Vancouver Monday with a program that includes the world premiere of Randolph Peters' Musicophilia, with percussion soloist Dame Evelyn Glennie.

Two different worlds of classical music show what they have in common
September 23, 2013 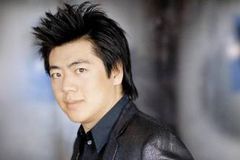 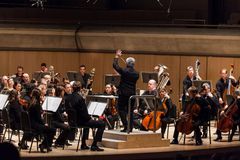 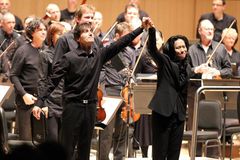 Meet the conductor taking up the baton in Calgary
September 11, 2013 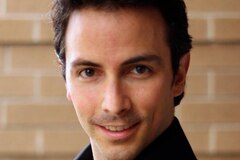 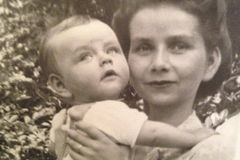 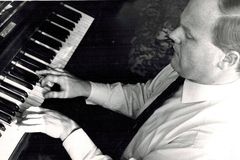