The record industry helped create the 20th century and fairly invented mass culture. But, to paraphrase Bob Dylan, the major music labels don't talk so loud or seem so proud any longer. With his five-part CBC Radio series, Twilight of the Gods, Robert Harris examines the history of the record business – going so far as to visit the home of Victor Records in Camden, N.J. – in an attempt to demystify it before it possibly disappears.

The title of your series is Twilight of the Gods, with the record industry as the gods. How did they serve us mere mortals?

The record industry found music. It brought us music. It husbanded the people who made music. In the 120 or so years of the music industry, for 100 of those years the record labels were the best friend that music lovers had.

Over the last 20 years, the status of the record industry has suffered, because of the way they've fought illegal downloading. Do they deserve all the criticism?

The stereotype of the record business is clear. That they're evil, stupid and a blight on society. Somebody told me that a survey was done that discovered the record industry has a lower reputation than tobacco companies. With this series, I wanted to step back and look at their entire legacy.

There's a history to the record industry fighting technological change. They fought radio, at the beginning, didn't they?

Exactly. Here was a free technology offering exactly the same product. The record industry tried to sue the radio industry out of existence. I talk about this on the fifth episode of the series. Rather than being a threat, the Internet is actually an enormous opportunity. Just as with radio, the Internet allows people to have access to your product so much easier. The trick is to find a business model that will make money for you.

Isn't the model, with subscription streaming services such as Spotify, already out there?

Right. Downloading is a thing of the past. Why do you need 1,000 songs sitting on your iPod? And yet some people cling to the notion of needing to own music. It's a real generational thing.

As the clout of the major record labels has declined, we've pretty much lost the idea of a music mainstream. Is that a lamentable loss? Or do you think the democratization of listening habits serves us better?

Nobody is sure of the answer. I'm 64, and to me, growing up, it seemed to be important that we all listened to the same music. People who are younger don't seem to care as much. It may be that they never experienced it, so they don't know.

I spoke to Jimmy Shaw of Metric, a popular band that's on its own label now. He said he isn't sure we're hearing songs that matter as much any more. Do you think the decline of the major record labels is the reason for that?

When you listen to Blowin' in the Wind, you figure, "How can that not be a hit?" But when you look at the history of all these songs, they weren't hits right away. Those A&R [artists and repertoire] guys and producers, they could spot hits and they could help create them and publicize them. When it comes to these songs, we sort of have to be told they're important. It's weird.

And now the people who told us what to listen to are disappearing. It's like what William Bell sang, that you don't miss your water till the well runs dry, right?

I talked to a lot of people, and they told me not to worry because music is a human need, and people will always get what they need. But you know, everyone needs to eat, but there a lot of people who go to bed hungry. They go to bed hungry because there's not an infrastructure in place. The need is not enough, in and of itself. And I think we're right in the middle of a time when we're not sure if people are going to get the music they need. 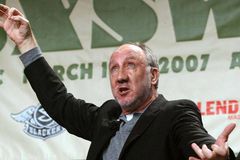