The Calgary Philharmonic is playing Camille Saint-Saën's Symphony No. 3 for organ Friday, promising it will give the Carthy organ in the Jack Singer Concert Hall a thorough workout. It's just one of dozens of concerts the orchestra will perform this season, and just one of dozens of concerts taking place across Canada this night. And yet, if you stand back from such a routine event, it's a remarkable thing: a performance created by centuries of culture, years of training and moments of inspiration; 35 minutes of sound made possible by everything from the development of polyphonic music and the invention of the organ to this week's rehearsals.

Of course, somewhere else in Calgary, chances are that a team of doctors is performing heart surgery. That's also a remarkable feat of human knowledge and ingenuity, and we naturally place a high social value on it: The doctors are going to save somebody's life.

How then do we judge what the Philharmonic is doing for the people in its audience? What social value do we place on art?

It's a hot topic these days because of a particular coincidence. For years, the Canadian arts community has relied on economic arguments to make the case for public funding of the arts: The non-profit arts sector and the cultural industries are great engines of job creation, tourism and urban renewal. Of course, that is not why people create art in the first place, and just as the cultural community seems finally to have wearied of using second-hand justifications for its activities, along comes Big Data.

Now all human activities are measurable and all information is shareable and – leaving the whole question of privacy for another day – data can be a great force for good. That's the belief of the Community Knowledge Exchange, a new Ontario organization formed to help the non-profit sector share information about everything from transit schedules and library books, to after-school programs and urban trees.

The arts community, however, is not so sure it is jumping on the data bandwagon. So when the Community Knowledge Exchange brought the non-profit sector together for an inaugural summit in Toronto this week, the culture types' contribution was to debate the very question of data. With the Canada Council's Simon Brault moderating, the motion on the floor was: "Be it resolved that the only way for arts and culture to be fully valued is to demonstrate their impact with hard facts."

The motion was challenged by Shawn Van Sluys, director of the Musagetes foundation, a philanthropic outfit in Guelph, Ont., that sponsors cultural projects in smaller communities in Canada and Europe. Van Sluys made an idealistic case for the transformative and the inspirational in art. He described the experience of listening to Bae Il-Dong, a traditional Korean Pansori singer, projecting his song great distances across the waters of Georgian Bay.

It's hard to top a story about a Korean star whose vocal training included living next to a waterfall for eight years, but Alain Dubuc, a Montreal economist and columnist for La Presse, did make a sophisticated case for the hard facts.

Economists are increasingly looking beyond GDP numbers to measure a society's success; he suggested wellness and happiness indexes may eventually provide better measures of culture's impact. Van Sluys replied there was something wrong with any society that thought you could measure happiness.

Dubuc then announced, "I hate Oxford debates," and called for a ladder of theories for the arts, beginning with simple economic arguments and building upward toward stories of culture's intrinsic value. At the very top, you'd wind up with anecdotes about Korean opera singers.

Occasionally, you will hear someone in the midst of a health-care-spending debate point out that hospitals do actually provide a huge number of jobs, but few people would think to argue that is why they offer heart surgery. Meanwhile, it seems unlikely that anybody in the Jack Singer Hall on Friday bought a concert ticket thinking, "Gosh darn it, it's time I did something for Calgary's economy."

Playmobil follows Lego’s lead into the movies – and that can’t be good for kids
November 12, 2014 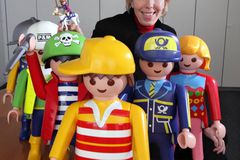 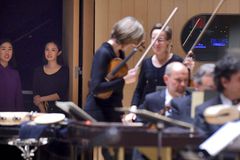