The week after the Grammys, the awards ceremony for commercial pop music in the United States, there was a tsunami of learned commentary and analysis about it in the press. I don't just mean on YouTube threads and teenagers' blogs ("yr band sucks! justin wuz robbed!"), but in newspapers and digital journals that also have an opinion on postfeminism and the government of Egypt.

I couldn't believe the numbers of artists and intellectuals whose passions were stirred: whose song was genius and sophisticated and whose was stupid and boring; which collaboration was cynical and who was selling out. You'd think they were weighing Cicero against Voltaire.

The seriousness was baffling, directed at an institution that is rating artistic products with about as much aesthetic and intellectual variation as an array of McDonald's hamburgers. Guys, you're arguing about how much mustard and how many patties.

Every piece of music causing these apparent schisms – from Lorde's bird-like singing to Daft Punk's electronic buzzing – is a song, a very simple and codified form. Never does the discussion about the worthiness of each song step outside itself and question the worthiness of songs themselves. No surprise here: Pop music is by far the most conservative art form there is.

Why is that? Possibly because it's so lucrative, and so there is no pressure on it to change; I don't know, possibly because it is easy and pleasurable and so its followers aren't the kind of people to demand challenges. They are happy with one fixed form for all music, called the song.

A song is a short composition for voice and instruments. It is a piece of sung poetry set to music. It is usually only a few minutes long. In popular music, a song follows a very strict pattern: There are verses, then a refrain, repeated several times. Sometimes there is a short passage of variation called a bridge. In hip hop, the verses can be chanted rather than sung, but the principle is the same. Generally the words are meant to represent the personal emotional state of the singer. The vast majority of them are about romantic relationships, although this is not a necessary condition. All songs – all of them, every single one, that is to say 100 per cent – must have a four-four time signature.

What is wrong with songs? Absolutely nothing. Songs are great. I love songs. I sing them in the shower sometimes. They can be poignant or cheery or angry and they can have catchy and satisfying melodies. There's nothing wrong with songs.

But they are one fixed form among hundreds of musical possibilities. There are literally thousands of other forms. Some of them have names – symphonies, tone-poems, fugues, variations on a theme etc. – but the most admired composers in history have tried to create their own forms, and have written pieces that have no strictures as to length, rhythm or instrumentation. The obligation to include words and a singer is intellectually limiting. Only a tiny portion of music history involves a singer and a lyric. Songs in music are generally thought to be a minor form.

In case you think I'm just in love with the past, there are thousands of performers of contemporary music who don't see themselves as part of the classical tradition, who work with contemporary electric instruments, who don't bother with songs either, who create soundscapes without singers, and those are hardly nostalgic. Just as there are poets who don't write limericks.

I also love a well-turned limerick. But imagine if every poem were a limerick. Imagine if the great poetry competitions stipulated that every poem submitted must be a limerick, and there were then 20 sub-limerick categories (contemporary limerick, adult limerick, urban limerick, emerging limericists), and then one category for every other form, called "other." Would you not get bored with limericks? Would you not start turning solely to the "other" category for the most interesting new work?

The song is the musical equivalent of the limerick. It is a form that has reached mass popularity, and that's great, but I'm wondering how its hegemony can possibly last. It's been the dominant musical form since the advent of mass media itself – so let's say about 100 years – and nobody is bored with it yet?

In every other art form, there have been, over the past 100 years, calls for insurrection, for the abandonment of formal convention. Many of the most popular forms – the painting, for example – have roken down and no longer dominate their field. To tell a visual artist that she must keep her work to coloured pigments on a two-dimensional surface would garner you nothing but a baffled sneer.

Every other art form has had its manifestos, its cries for shifts beyond fixed forms and expectations. We have had demands for novels that aren't fiction, poetry that isn't lyric, classical music that isn't emotional, cinema that isn't narrative. And we've had successful products from each of these radical denunciations. I'm not just talking about obscure intellectuals, either: Some of our most famous artists are people who have abandoned fixed forms and genre expectations. (Andy Warhol became a millionaire and a pop icon through a kind of conceptualism; Godfrey Reggio made the plotless Qatsi movies international box-office hits; Marie Calloway is the obsession of every stylish young person in America because of her non-literary, non-novel novel … the list could go on for pages.)

So why are we so stuck on the song? I'm so bored with it. Aren't you, all you bearded, Marxist, feminist, Alain-Robbe-Grillet-reading pop-music intellectuals? Why are you guys so complacent? Why are you so square? 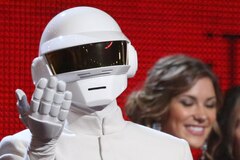 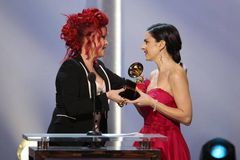