Please, for his sake, do as Ron Sexsmith would like and think of him as a St. Bernard.

"If you see a St. Bernard, it's kind of funny looking but strangely beautiful, right?" says the Canadian singer-songwriter. "And it's noble or something, right?"

During most of the hour we have spent talking about his work – his new album, Forever Endeavour, will be released next week – as well as his insecurities and his wife who has helped him manage them, he has been looking past me, over my shoulder, unwilling to meet my gaze. But now, for the first time, he looks directly at me. "And I want to be like a St. Bernard." He looks away again, and then back. "Okay, I'm kind of funny looking," he offers. "But it's like a one-of-a-kind thing," he asserts as boldly as he can.

That statement takes a lot of courage. For all his considerable Juno-award-winning talent and the acclamation from legendary singers (Elton John, Elvis Costello) who have done covers of his songs, Sexsmith has always struggled with insecurity over his looks, an issue he rarely addresses. But at 49, he is learning to take control of the issue.

Well, let's just say he's trying to. Nothing about Sexsmith is unequivocal. His thoughts are like dance partners he doesn't want to stick with for long, switching from one to the other, even if they're contradictory.

His looks are almost startlingly unexpected in the context of contemporary culture, in which anyone in the public realm "has to have washboard abs and perfect teeth," he acknowledges. He wears a checkered jacket and underneath it, a rumpled flowery shirt, the unbuttoned cuffs of which hang down over his hands. His hair is like a hat your grandmother might have clapped on her head to go to church. He doesn't like to smile, because he has bad teeth, he explains. "When my first album came out [in 1995], a journalist in the U.K. wrote something like, 'It's a good thing he has sex in his name because he doesn't look like he is getting any.' But I was," he offers peevishly before explaining that he indulged in groupie culture.

Sexsmith makes no apparent effort to comply with image expectations, yet he complains about them. "I am so obsessed with music and then there's a whole other component of the industry, where you're expected to take photos," he says in hangdog mode. "And I feel very limited with what I can do on a video or anything like that. People put extra effort into how they look, and I just don't know how to do that."

He needs to own who he is, I suggest. He brightens up a bit, and tells me that while he was making his new album, he got to know John C. Reilly, the popular American actor with a humble mug. "And I just thought, hanging out with him, that he's kind of an unusual looking guy, but he's so comfortable in his own skin, and he looks great onscreen because of the way he carries himself." He has also watched a DVD of a recent Neil Diamond performance. "I was, like, obsessed with it," he tells me with some enthusiasm. "He comes out, and he's this little guy, 70 or something, and he owns his Neil Diamond-ness. But he's not being ironic. He's sincere at a strange level. There is this superficial world out there, but I think there are those who don't care about it."

But just as he takes this happy thought out for a spin, he dumps it for a sad one.

"Sometimes, I feel that I can [own my look]," he says. "And then I have a setback, and I feel all down again." He looks down at his hands, and my gaze follows his this time. He's wringing them. Then he picks at his bitten nails.

"Weight issues have been a struggle since I turned 30," he confesses. "It's an emotional thing. If I get depressed, I could eat a whole box of cereal." He swims every day, he tells me meekly, as if admitting that he did his best on a homework assignment he has failed. "It shouldn't really matter, but for me to go on stage [when heavier] it makes it hard for me to open my eyes. If I see someone looking at me, and then whispering to someone, I think, 'Oh, they're probably saying he let himself go.' I get all freaked out."

If his looks cause him distress, so does the reputation of being a sad sack. But that, too, he makes no effort to dislodge. "What happened with me and my early albums is that I got labelled melancholic," he says. "A lot of my songs, especially since Cobblestone Runway, which was in 2002, have been very hopeful and spiritual. They're not sad songs, really. But nobody sees that."

For his new album, produced by Mitchell Froom, he tried not to think about what it should be. But as it turns out, it features the exact kind of Sexsmith songs he wishes he weren't known for. There's a lot of bitter melancholy and regret. He had a health scare, a lump in his throat that was a benign tumour, which disappeared on its own. It made him think about his life.

"I'm more wistful, thinking about mistakes I've made and other things I could have done differently." He has a lot of guilt about those groupie, sex-filled years of new fame, for example. He was in a common-law relationship at the time and had two young children. "I screwed it up. There was a lot of self-loathing."

It wasn't until he met his current wife, Colleen Hixenbaugh, that he started to find equilibrium. They were acquaintances for about five years after meeting in 1996 in New York, where she worked as a personal assistant to singer, Rosanne Cash. They got together as a couple in 2001 and married a few years ago, he says. "I always say she needs glasses. She thinks I'm like the best-looking guy in the world," he says, bemused.

The new album won't do much to displace the melancholic rap, I point out.

"Probably not," he sighs. Then again, that sort of helps with the looks issue. He nods that St. Bernard head of his. "Ultimately, I look like the guy who sings these songs." And with that, he allows a corner of his lip to lift in an attempt at rueful contentedness. 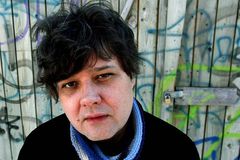 Ron Sexsmith’s Nowhere to Go, and other essential tracks
December 10, 2012 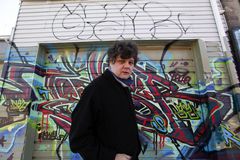 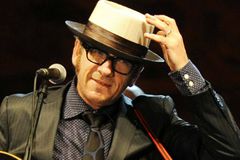