Four years after their Toronto disaster, the producers of The Passion of Winnie still wince ruefully as they recall every scathing word in The Globe and Mail review. Their experimental opera on the life of Winnie Madikizela-Mandela, the reviewer said, was "tattered, confused and theatrically starved" and "has a date with the drawing board."

That stinging critique was the start of a long journey that has culminated in the birth of South Africa's first fully indigenous opera. The landmark production - now called Winnie: The Opera - features a huge African cast and orchestra, who explore its fearlessly political themes in African language and music. It opens next Thursday in Pretoria.

The original version was produced in Toronto in 2007 as a low-budget "digital opera," with Canadian students trying to sing in the Xhosa language. It was an embarrassing flop. But the creators followed that reviewer's advice. They went back to the drawing board, rewrote the entire work, and rediscovered their South African roots.

The new version is a wholly South African production. The leading cast members - along with the composer, librettists and producers - are South African, while the libretto is in Xhosa and English; the music is a blend of African and classical influences, performed by a 30-member choir and the 65-member KwaZulu-Natal Philharmonic Orchestra. (The Xhosa language is the mother tongue of the Eastern Cape, where Nelson Mandela and his second wife, Winnie, were born.)

Its initial one-week run will be at the State Theatre in Pretoria - normally a bastion of white Afrikaner society, but likely to see a more racially diverse audience for this production, with ticket prices kept moderate.

The budget, a meagre $30,000 for the Toronto production, has expanded to about $1.2-million, with funding from the South African government and soap-opera producer Mfundi Vundla (who co-wrote the libretto with filmmaker Warren Wilensky). The money allowed the producers to devote two years to the development of their opera. "We've had time to let our ideas come to maturity, a luxury we didn't have in Canada," says the composer and producer, 36-year-old Bongani Ndodana-Breen, who returned to South Africa in 2007 after working in Canada for a decade.

"I think it's bolder this time. We're taking risks because we've got an amazing symphony orchestra and professional singers. It's groundbreaking in its way. People haven't heard how a black South African treats a symphony orchestra in terms of orchestration. There's certain territory here that I've gotten into, trying to evoke sounds and timbres that you don't usually find in a Western classical score - sounds from indigenous South African music, cadences from South African folk music."

In a rehearsal room at the cavernous State Theatre, he jumps over to a piano and plays a chord that evokes the music of South African jazz composer and pianist Abdullah Ibrahim. Jazz influences, too, will help shape the opera, says Ndodana-Breen. "It is opera, but it is African opera, it is contemporary African opera. Opera is essentially storytelling, through song and acting, and that has existed in Xhosa culture and all African cultures."

South Africans, he says, have a "great hunger" to hear their own history, told by their own storytellers, rather than by foreigners. And the South African cast members, many of them trained in European opera, just "light up" at the chance to sing in Xhosa, he says.

Ndodana-Breen, himself a Xhosa from the Eastern Cape, is one of South Africa's most acclaimed young composers. He has been working on the Winnie project since 2003, when the idea first emerged in his conversations with Wilensky in Canada.

Four years ago, when Winnie Madikizela-Mandela was invited to the original opera, the Canadian government famously barred her from the country because of her criminal convictions. This time, she won't need a visa. She is expected to be in the audience at the premiere, having already met the producers to give them her blessing. They say she made no attempt to censor or interfere with their portrayal of her life.

As she approaches her 75th birthday this year, Madikizela-Mandela still makes headlines in South Africa for her militancy. During apartheid, she was notorious for her praise of "necklacing" - placing a gasoline-soaked burning tire around the neck of an enemy. This week, she sparked controversy by supporting a bellicose youth leader in a court case over his singing of the liberation song Kill the Boer - alleged to have inspired the murder of Afrikaner farmers.

To many South Africans, she is still the revered "mother of the nation," and one of the most popular members of the ruling African National Congress. To others, she is an arrogant adulterer and convicted kidnapper. One recent furor was sparked when she allegedly used her bodyguards to bully the traffic police after her limousine was stopped for speeding.

The endless fascination with her life has inspired books and television programs. This year she will be immortalized in a Hollywood biopic starring Jennifer Hudson. But there is nothing in the opera to sanitize her reputation. It grapples directly with the most famous charge against her: the 1988 kidnapping of 14-year-old Stompie Seipei by her bodyguards. He was later found with his throat slit.

The opera's opening scene takes place on the final day of the Truth and Reconciliation Commission, where a lawyer confronts Madikizela-Mandela about the kidnapping. The showdown evokes her memories of a harsh life under apartheid persecution, including 13 months in solitary confinement; torture; banishment to internal exile; and the sacrifice of her family life. But it also finally provokes her anguished confession that "things went horribly wrong."

The producers see it as a larger-than-life story, with all the grandeur and melodrama and passion that opera requires. They also see it as a search for lost innocence - hers and South Africa's - destroyed in the brutality and corruption of apartheid.

The producers, like many South Africans, cannot agree on the ultimate meaning of Madikizela-Mandela's life. "I would call her a tragic heroine," Ndodana-Breen says.

Wilensky, his long-time collaborator in Toronto and Pretoria, jumps into the conversation. "I don't see it as a tragedy," he says. "Ultimately the country was victorious, and she was part of that victory."

Winnie: The Opera gets standing ovation in South Africa
April 29, 2011 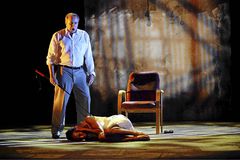