Considering the odyssey of low-key stress and annoyance I endured to get here – involving, in rough order: grinding through weekend traffic out of Toronto, getting lost thanks to a baffling Google maps-guided detour that included a jaunt down an unpaved backcountry lane called Sugar Bush Road, dutifully slowing though a "Turtle Crossing Zone," losing $65 at blackjack, being reprimanded by a security guard who materialized seemingly out of nowhere for snapping a photo of a Big Bang Theory-branded slot machine, and lumbering through a slow-moving security line winding across the gambling floor, past metal detectors and into the Casino Rama Entertainment Centre – I find it totally unacceptable for the band to arrive 20 minutes late to the stage.

When I grumble about the tardiness to the guy seated next to me, he shrugs: "Hey. It's rock 'n' roll."

Can a concert by the made-up supergroup cover band the Hollywood Vampires, which includes shock-rock pioneer Alice Cooper on vocals and Aerosmith's Joe Perry on guitar, and which is also an indulgent vehicle for movie star/punchline/wannabe musician Johnny Depp, who also plays guitar and provides back-up vocals and mugs for photos, really rock 'n' roll?

Inasmuch as "rock 'n' roll" is now a hollow phrase, and more of a nostalgic concept of the bygone heydays of white men slugging Jack Daniel's Tennessee Whiskey and stealing music from black people and doing sex stuff in hotel rooms, then, yes. Sure. This Hollywood Vampires cash-in concert tour stopping over in a casino ballroom owned by the Chippewas of Rama Mnjikaning First Nation in rural Ontario is as rock 'n' roll as a pair of Rolling Stones boxer shorts.

Following a somewhat curious deployment of the trademark 20th Century Fox fanfare, there was a video introduction of an old dusty tome opening up to reveal an index of so-called "Hollywood Vampires" – bygone rock stars whose music the band will be playing tribute to: Jimi Hendrix, Jim Morrison, John Lennon, The Who's Keith Moon and T-Rex's Marc Bolan. A mock-spooky voiceover track sets the tone. "They came … They drank … They died!"

It's easy to snarl at this as the tasteless romance of alcoholism and macho decadence. But I find that as you get older, such heady notions as "authenticity" matter less and less. Certainly nobody in the audience – from the woman howling, "I WANT SOME ROCK 'N' ROLLLLLLLL!!!!" and thrusting up and down like she's operating a bike pump, to the other woman with a jacket accessorized with not one but multiple spider brooches, to any of the literal thousands of others in this sea of black T-shirts airbrushed with skulls and hairsprayed beehives – seems to care.

Instead of Bowie and the Beatles and even Alice Cooper's own songs, the Hollywood Vampires could be playing Stravinsky's The Rite of Spring on kazoos and people would still be losing their minds.

"I was never really into him until Pirates of the Caribbean," says Carolyn Scheel, 36, sitting just outside Casino Rama's Dream Catcher Lounge.

Depp's mid-career turn from serious-enough thespian to blockbuster A-lister with 2003's first Pirates of the Caribbean movie was a key pivot for his celebrity. Not only was he being paid many millions – "stupid money," as he once described it – to continually reprise his role as the swaggering swashbuckler Captain Jack Sparrow. But the role itself captured, in its own cartoony way, the essence of Depp's appeal.

He was playing a rascally, seductive, slightly camp version of a high seas brigand – who across actual maritime history were brutal marauders, murderers and rapists. Like Depp's own star persona, Sparrow is highly sexualized and exaggeratedly "dangerous" and "edgy" without seeming legitimately threatening. Think also of Depp's earlier star turn in 1990's Edward Scissorhands, as a the titular monster who underneath his barbed, weaponized exterior was, as the posters put it, "an uncommonly gentle man."

"What I love about him," begins Nicole Thier, a 25-year-old fan from Richmond Hill, Ont., emphasizing the "love" when I ask her what she likes about a Depp, "is that he's a little bit weird, which is good because I always felt a little bit weird. He made being weird cool."

It seems incongruous: the weirdo as the cool guy, the outsider as superstar. But it's part of Depp's stock-and-trade, playing maladjusted but impossibly handsome loners (What's Eating Gilbert Grape), mentally unstable lotharios (Don Juan DeMarco), gangsters (Public Enemies), river-rats (Chocolat) and part-time rogues (Mortdecai). He tempers his allure with a dash of danger, as fiction's consummate conglomerate of seductiveness and terror – the vampire.

On stage, Depp's aesthetic is spooky-chic. It's as if he was costume-designed by a tornado that ripped through a Spencer's gift store, a tattoo parlour and one of those Halloween costume outlets. He is wearing a billowy striped bodice under a clenched vest, fastened together with buckles and chains and belts and scarves and other superfluous, sartorial miscellany, his hair undercut and slicked back, like a cross between a preening pompadour and punk rock mohawk. I'm pretty sure he's wearing shinguards under his pants, as if to give the illusion of form to his sacklike, genie-cut trousers. He is, every overaccessorized inch of him, the living embodiment of H.L. Mencken's contemptuous description of the male actor as, "the human clothes-horse, the nimble squire dames."

It's a shtick that's so effective that both Schell and Thier, among others, ponied up the money ($1,500 a person) for an exclusive "VIP Meet-and-Greet" package before the concert. "I'm old enough to know better than to spend this kind of money," Scheel says. "I don't get out much. This is my girls night. And I got to have a real conversation with Johnny Depp."

Such personal-seeming connections are the very stuff of the Johnny Depp Show. From my seat in the seventh row I watch as he mouths "hey" at his admirers, winks at them, waves at them – dainty little waves, where he just kind of flutter his fingers.

This Hollywood Vampires concert is, transparently, an opportunity to be in the same room as Depp. I mean it's not like Billy Bob Thornton's bluegrass band or Steve Martin's banjo albums, where the lines between an established star persona and their side project whims are clearly, painstakingly, drawn. With the Hollywood Vampires, the star and the music are one and the same.

It's here that this concert by a joke, made-up, rock 'n' roll supergroup, playing an auditorium that has previously hosted the likes of Grand Funk Railroad, Sha-Na-Na, and ventriloquist Jeff Dunham and his entourage of racist puppets, wades from the realm of the archly silly into the weeds of the actually sinister. It's as if all these fans, who are openly and proudly obsessional in their devotion, are gathered in solidarity for a man they refuse to admit they don't really know.

In May, the actress Amber Heard filed for divorce from Depp, ending a 15-month marriage that, the actress alleges, was marred by physical abuse.

Depp denied the allegations. He also had his two tattoos dedicated to Heard altered: a pin-up portrait of his ex-wife blacked out, and, across the knuckles of his right hand, the word SLIM (a term of endearment) altered to SCUM (less-so). The ranks of Hollywood Vampire fans, who are principally Depp fans, have formed behind their idol, keen to defend his honour.

"I never liked her, to be honest. It's not a jealousy thing," says Thier, when I ask her about Heard's allegations. "When she got to be in The Rum Diary with him, I was like, 'Ew, why does she get to be in a movie with him?'"

Scheel seems similarly unruffled, observing that the timing of Heard's allegations "is suspicious." Of course, it stands to reason that everyone who bothers showing up to a Depp concert a) don't believe that Depp is a wife beater; or b) just don't care.

Domestic abusers are in no short supply in rock music, from swaggering bad boys such as Scott Weiland, Vince Neil and Axl Rose, on back to beardo peacenik John Lennon. "Separate the art from the artist," you hear, and perhaps that's all well and good. But what happens when the art is the artist? When this is the Johnny Depp Show and the artist in question is Johnny Depp?

"He's just not that kind of person," says Thier, inflexible in her defence of Depp. "I know that it is absolutely not true. Look at the way he treats people around him. He wouldn't hurt a fly. He's known for treating dogs better than most people treat their own children."

From the front row, Thier found herself the object of her idol's gaze "He winked at me and blew me kisses. And I was like, 'I love you so much!'"

And that's what the Johnny Depp Show is, if it's anything – a chance to upload a poorly lit, pixelated photo to Facebook and tell your friends that Depp blew a kiss and flapped his bejewelled hand in your vague direction. This superstar. This celebrity. This millionaire many-times-over. This eye-shadowed self-parody of outdated hard-rock coolness, all-too-nimble squire of dames, and purported beater of women.

It feels like a ritual of idolatry. The shouting, selfies, singing-along, and pained cries of "JOHNNNNNYYYYYYYYYYY" help sustain a necessary fiction for the diehard fans, desperate to believe that the object of their obsession is weird-but-cool, dangerous-but-not-really, and, despite the allegations of battery and chucking a cellphone at his wife, still uncommonly gentle underneath it all. Somehow. 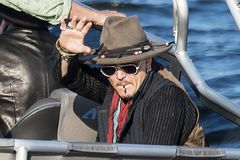 Amber Heard files for divorce from Johnny Depp
May 26, 2016 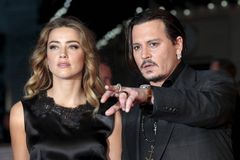