If your vantage is atop the hemisphere's tallest free-standing structure – like Drake's – and you've established yourself as the most-heard artist in the world – like Drake – what comes next?

Getting more out of life. Not measuring it as a tally of moments, but by their collective weight, each decision enriched by experience. This philosophy is what Drake's latest project – More Life – is built upon. It's not an album, but a playlist: an opportunity to release music without the constraints or expectations of a traditional record, but with the business savvy to give it potential for the same impact.

The successes of services such as Spotify and Apple Music prove that more than 70 million people worldwide will pay for on-demand streaming. Playlists have become the dominant listening model of the medium: some made by users, many curated by labels, artists or the services themselves. But with five months of promotion behind it, More Life is unprecedented. It's a playlist with the spirit of a mixtape marketed like an album. Depending on how it's received by consumers and media-measurement moguls, Drake could be the latest in a growing cabal of pop artists shaking up the very definition of an album.

The playlist is slated for release this Saturday, likely during Drake's OVO Sound Radio show on Apple Music's Beats1 station. It's officially presented by the October Firm, the team of Drake and his co-manager Oliver El-Khatib, the project's executive producer. And it's anchored by Fake Love, one of three songs from the project released last fall and already a certified hit: Just last week it had 16,600 download sales and eight million on-demand streams, according to Nielsen Music.

Drake said in a February interview that he's calling More Life a playlist because it will emulate his Beats1 show and all the excitement of hearing new music live on the air – but also because the old definitions of albums and free mixtapes didn't make sense to him any more. He has a habit of labouring long over albums as statements, letting projects such as mixtapes fill gaps – including If You're Reading This It's Too Late, which, unlike traditional rap mixtapes, came with a price tag. "It was kinda getting tough to go, 'Hey, I'm dropping a mixtape, but it's for sale on iTunes,'" he said. "I didn't really want people to say, 'Oh, this is [his] next album.'"

Much like If You're Reading This, then, More Life is a bridge for fans – a project to keep them happy as Drake lingers over his definitive statement.

But why a playlist? Well, last year's album Views lent itself brilliantly to the medium, satiating both fan and business needs. Any 1,500 song streams from a record are considered the equivalent of an album sale, and Drake was the most-streamed artist of 2016. With 20 tracks on Views, fans of Drake's different styles – brooding rap, laid-back pop, re-envisioned dance hall – could use Views to pick and choose which version of Drake they liked the best, and shove those songs into a concise playlist, all while adding to his mountain of sales equivalents.

Drake keeps bending digital mediums to his will – and even the most dedicated minds in media measurement are waiting to see what that's going to look like.

"When you've got an artist of this stature, they're going to try to be inventive and continue to challenge the system," says David Bakula, Nielsen's senior vice-president of music insights. "We've got plans in place no matter what."

How Nielsen defines More Life will affect how it fits into Billboard charts – and, in turn, where it will fit in Drake's canon from a populist perspective. If it's a standard collection of songs mostly featuring Drake, it will be measured like a Drake album, likely all the way to the top of the charts.

Or maybe Drake becomes a background player, wandering in and out like classic compilations "presented" by labels and artists such as Eminem, Kanye West or Ruff Ryders Entertainment – ventures meant to showcase friends and labelmates. While Drake has hinted that More Life could be mostly his music, a complication would force an executive call by Billboard postrelease to figure out if he should get top chart billing.

There are many confounding variables. More Life could also be like a classic mixtape – a free release, but also available to streaming subscribers, like Chance the Rapper's Grammy-winning Coloring Book – but the fact that you can buy Fake Love on iTunes suggests otherwise. Will it be rigidly structured with songs for sale, guaranteeing its comparison to an album? Or will it grow and evolve, new songs popping in as Drake and El-Khatib feel? West's The Life of Pablo made this format possible, but More Life could simply be calling it like it is: a malleable playlist.

Too many changes, though, might alter its business case on the album charts. Or, if More Life is sold like an album but changes over time, it could incur the scorn of fans who already bought old versions. But it is hard to imagine Drake, a pedant for populism, doing that. He would rather seize fan moments – wringing more life from his ever-growing body of work.

Artists moving from traditional labels to streaming signals a shift in the way music is consumed
December 27, 2016 One dance with the new Drake: Where Views could take him
April 29, 2016 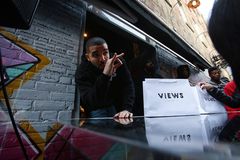 The Junos, hockey and the TTC: How Drake brought Canada to Saturday Night Live
May 15, 2016 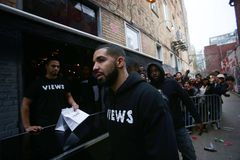