Robert Rodriguez listened to his young son's ideas and made one of his lesser films, The Adventures of Shark Boy and Lava Girl 3D. M. Night Shyamalan thought so highly of the bedtime story he invented for his children that he turned it into the terrible Lady in the Water. Japanese director Nobuhiko Obayashi was luckier in drawing inspiration from his daughter and has a fascinating Halloween film, House (1977), to show for it.

Obayashi, who was making a good living in the 1970s creating big-budget Japanese television commercials of the sort parodied in the movie Lost in Translation, wanted to make a serious feature film. Instead, after the theatrical success of Steven Spielberg's Jaws, producers urged him to come up with a similarly lucrative premise. As he says in a bonus feature on this week's Criterion Blu-ray, an adult would have applied linear thinking to the brief, perhaps proposing a bear attack instead of a shark attack. But he listened to his daughter Chigumi, who was around 10 at the time.

"Daddy," he recalls her saying, "it would be scary if my reflection in that mirror began attacking me." Oh, and what if futons assaulted people, or a watermelon left to cool in a deep well emerged as a human head, or a piano ate someone? Obayashi bundled together the ideas and approached screenwriter Chiho Katsura. Katsura drew inspiration from a Walter de la Mare short story about grandchildren who disappeared one by one into a trunk while visiting their grandmother, and he emerged with this tale of a haunted house.

Stranger still is Obayashi's manner of telling the tale. Applying his TV-commercial tactics, he uses painted backdrops, occasional animation, cheerful (and cheesy) pop tunes, amusing overstatement (Gorgeous's stepmother-to-be is never seen without a wind machine ruffling her hair), split screens, freeze frames and disorienting zooms. Imagine The Brady Bunch crossed with And Then There Were None, or Pee-wee's Big Adventure crossed with a Douglas Sirk melodrama and the dream logic of a David Lynch spookfest. House revels in its artificiality.

There is a darker undercurrent, for those who seek it. Obayashi, who grew up in Hiroshima, says some of his special effects were inspired by the dropping of the bomb on his city in 1945. "All of my close childhood friends died because of the bomb, so I wanted to write a fantasy with the atomic bomb as a theme."

The movie was a hit. Teens loved it, even as their parents warned them to stay away. Executives at Toho Studios were unhappy, Obayashi says, because they feared the success of such a nonsensical movie would mean the end of more serious Japanese cinema. Never mind. One person's trick is another's treat.

I Am Love (2009) This is a still, measured drama broken by moments of passion, all the more exhilarating for the long passages of restraint that surround them. The Recchi family lives in luxury in Milan. Emma (Tilda Swinton), the Russian-born wife, feels hemmed in, but we sense rather than know this. Swinton and director Luca Guadagnino co-produced this two-hour Italian-language movie and suggest, in a shared commentary, that gestures are as important as speeches. Swinton recalls shooting a nude love scene in a field alive with insects. "We were so stung afterward."

You Don't Know Jack (2010) Opponents of assisted suicide aren't likely to switch sides because of this HBO movie, but they may agree that Al Pacino deserved his Emmy for playing Jack Kevorkian, the doctor who helped about 130 people kill themselves. Kevorkian, who emerged from an eight-year prison stretch in 2007, marvels in the DVD extras that Pacino "looked even more like me than I do." He was in the audience when Pacino and writer Adam Mazer received their Emmys. "Jack Kevorkian," Mazer said from the stage, "I'm so grateful you're my friend. But I'm even more grateful that you're not my physician."

Back to the Future: 25th Anniversary Trilogy (1985/89/90) Director Robert Zemeckis shot the first of these films for five weeks with Eric Stoltz in the lead, before realizing the movie wouldn't work without Michael J. Fox's comic sensibilities. And Disney refused to make the film because of the scene in which time-travelling Marty McFly (Fox) meets his mother (Lea Thompson) as a teen, and she tries to make out with him. "Are you insane?" Zemeckis recalls Disney saying. "This is incest!" Along with an excellent multipart retrospective, the Blu-ray set includes a "setups and payoffs" feature to help viewers navigate the time-travel plot. 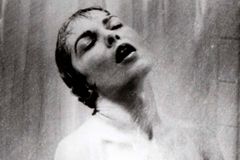 We're outrageously fortunate to have Slings and Arrows
October 29, 2010