The campaign to elevate Norman Rockwell to the pantheon of great American artists began in earnest a few months after Sept. 11, 2001, when a touring retrospective of his work made its stop at New York's Guggenheim Museum, that temple of modernist art. It wasn't exactly a rout of those who had long dismissed the popular illustrator's work. Certainly, the crowds did pour in, and many observers made the point that a shattered nation needed the balm of Rockwell's sunny view of American life. But The Wall Street Journal suggested that making people feel good about themselves was not a worthy artistic goal, and the Village Voice denounced the show as reactionary.

A decade later, a recessionary America still needs the balm and, as a second touring retrospective, entitled American Chronicles: The Art of Norman Rockwell, makes its one Canadian stop at the Winnipeg Art Gallery, the campaign to embrace the artist is all but won. Today, it's cool to like Rockwell.

Any defence of Rockwell logically begins with a few late paintings in which the artist confronted the issue of race in America. American Chronicles includes 1963's The Problem We all Live With, an illustration for Look magazine in which Rockwell bravely tackled the subject of desegregation. It depicts a young black schoolgirl in a pristine white dress framed by the massive bodies of four U.S. marshals as she walks in front of a wall marked by racist graffiti and the ugly splatter of a rotten tomato. Late in his career, Rockwell had been liberated from his long association with the conservative Saturday Evening Post (where an unwritten rule decreed blacks could be represented only in subservient roles) and had been inspired by the liberal politics of his third wife, Molly.

In an era where high art offered abstraction's transcendence and pop's irony, it was the lowly illustrator, so often denounced for his corny optimism, who threw down the political gauntlet. The Problem We all Live With is a realist masterpiece: Perfectly composed and precisely executed, it delivers its liberalism with understated grace, observing rather than preaching.

Other Rockwell works of the period are less successful. Murder in Mississippi, an image created for Look in 1965 and showing a dying black man held up by a white colleague, turns the murders of civil-rights workers into bathos; the magazine chose to publish a rawer preparatory sketch instead of the melodramatically lit scene shown in the final painting, both of which are on view in Winnipeg in the show that opened Friday. Rockwell himself, referring to the final version, said that "the anger had all gone out of it." Sentimentality may be forgivable on Christmas cards – Rockwell created many for Hallmark – but it seems downright insulting as an approach to racial politics.

Humour, so crucial to the Saturday Evening Post covers, is missing from this later work. So if reassessment begins there, it also has to reach back to the mischievous schoolboys, kindly doctors, harried travellers and undercover Santas who were Rockwell's bread and butter from the twenties through the fifties.

Although Rockwell is always called an illustrator, and did illustrate both magazine stories and books such as The Adventures of Tom Sawyer, the Post covers were self-contained anecdotes the artist himself devised and executed in an intensely narrative style. He is perhaps better described as a genre painter, living in an era in which that category had all but disappeared, but creating art that harkens back to the Dutch masters, to the French satirist Honoré Daumier or to Cornelius Krieghoff, that classic 19{+t}{+h}-century painter of daily life and human foible in the New World.

In his desire to tell a story, Rockwell even occasionally turned to the frames of the comic strip: In Coming and Going, a summer, 1947 cover for the Post, he split the picture into upper and lower panes to show an exhilarated family starting out for the beach in the morning and returning exhausted in the evening. The picture is full of loving observation of both people and objects, from the deck chairs tied perilously to one side of the car to the bubble-gum-blowing girl inside it. Rockwell, who usually worked in oil, produced these obsessively accurate details by using live models, costumes, and historical and contemporary props, creating scenes he would then photograph and sketch before he painted.

His pictures are crammed full of stuff, yet they depended on viewers grasping the story as quickly as they could open the cover of a magazine. It was a narrative magic trick that was crucial to his success – and difficult to achieve. American Chronicles includes War News, a 1944 painting of a short-order cook and three working men huddled around a radio in a diner while a newspaper lies on the counter beside them. It was all but complete when Rockwell abandoned it because the angle of the newspaper made it difficult for the viewer to read what would be a crucial clue to the image, a headline predicting the Normandy invasion.

Those four men form an anxious little posse of civic hope: The liberal optimism that Rockwell would so emphatically express in his later work was already well-established in the Post covers. Famed images, such as that of a grandmother and grandson bowing their heads in prayer in the midst of a busy train-station restaurant, or a church-bound mother and her children tripping by their pajama-clad dad on a Sunday morning, all send a message of tolerance. In the words of pop culture critic Dave Hickey, an early champion of the current Rockwell revival, these images say "Hey, people are different. Get used to it."

In a 1997 essay comparing Rockwell's work to popular songs that offer the satisfaction of rhyme, Hickey notes that the artist always deals with the quotidian, presenting a world in which any discord – religious differences, rule-breaking, lost property – is made comic. There is an idealism there, a faith in human goodness, that was Rockwell's determined reaction to the ugly or unpleasant. Both detractors and champions have pointed out that his is an America as it might have wished to see itself, not as it actually was, which may explain why the aggression of the later works feels forced.

Rather like Charles Dickens, whose comic characters he tried drawing as a young man, Rockwell did not live this ideal domestic life himself. He was a workaholic who spent seven days a week in the studio, obsessing over the details of his paintings, anxiously arguing with the Post over unilateral changes, and worrying perpetually about his artistic reputation. Jazz Age libertinism – especially on his wife's part – put an end to his ill-advised first marriage. His second wife, Mary, was the much-loved mother of his three sons, but also an alcoholic who suffered debilitating bouts of depression. She died prematurely of a heart attack in 1960, during a period when Rockwell himself was in therapy at the psychiatric hospital that treated her.

His personal troubles, however, never interfered with his prodigious production. In 1956, during Mary's last, difficult years, he created the well-loved image of a boy discovering a red suit and white beard in the drawer of a large bedroom bureau. The upper hallway of Rockwells' home in Stockbridge, Mass., where he and Mary had moved to be close to her doctors, is visible through the bedroom door. The scene is a particularly choice example of Rockwell's method, and his awareness of how he achieved it, as the child's shocked realization that dad is Santa mirrors the viewer's own little "ah-ha" moment as the story is grasped.

Here is a painting that, like the abstract canvases hung in the Guggenheim, is partly about itself. And yet, in contrast to the art-for-art's-sake school, Rockwell's paintings stand out not merely for their belated political engagement but for their lifelong social engagement, their observation of human relations and their affection for daily life. Today, when the distinction between high and low art matters so much less than it did in 1956, that engagement can simply be relished.

American Chronicles: The Art of Norman Rockwell continues at the Winnipeg Art Gallery until May 20. 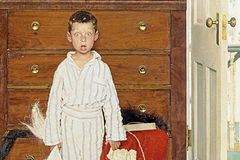