Emily Carr's sisters had some issues with her art. Too modern. But there was one painting of hers that big sister Elizabeth Carr loved. Wild Lilies, likely painted in the early 1890s when Emily was at art school in San Francisco, was a great favourite of hers.

"Elizabeth absolutely loved this painting and Emily felt like it was the only time she ever got praise from one of her sisters over her paintings," says Mary Jo Hughes, chief curator of the Art Gallery of Greater Victoria (AGGV).

Elizabeth – or Lizzie – became ill with breast cancer and in her dying days, was cared for by the Sisters of St. Ann at St. Joseph's Hospital. After her death in 1936, Emily gave the sisters the painting in gratitude for the care her sister had received.

The sisters held onto the painting. It hung on a wall of the hospital and later in a lounge at the Queenswood Centre for Spiritual Growth, both in the Victoria area, for decades. Now, they've transferred Wild Lilies, along with 17 other works, to the Art Gallery of Greater Victoria.

"I'm very grateful," says Hughes, noting the painting has been an important component of the AGGV's exhibition Emily Carr: On the Edge of Nowhere. "I was afraid they were going to ask for it back."

It's the earliest painting in the AGGV's survey, which opened last year and is to be a permanent fixture of the gallery (with some rotating content). And Wild Lilies, despite its clear visual distance from the work for which Carr is celebrated, has been a favourite among visitors, Hughes says. Last week a woman stood at the back of the gallery staring at the painting, then pulled Hughes aside. "Look, it's glowing," she said.

For Hughes, the work is important because it provides early evidence of Carr's artistic skill. "This demonstrates that she really does have that solid foundation of draftsmanship, ability to paint, ability to handle colour, form and light and shadow. It really shows her strengths and I think that's important for us to demonstrate – the roots that she comes from. And we see the distance she travels in terms of her later art."

The Sisters of St. Ann felt this was the right time to transfer the works, given the order's uncertain future. "We're fewer," says Sister Marie Zarowny, Sisters of St. Ann Province Leader. Now 70, she notes that when she joined the order, there would have been about 300 members. They're down to 44, with an average age of almost 80.

"We've had to move toward the closure of our various institutions," Sister Marie says. "There isn't a place to show [the paintings] And we felt that this is a rich heritage that we have, and we're looking at the time when there may not be a Sisters of St. Ann in this area. So it's kind of like how do we pass that legacy on and make sure that it's preserved and available to the rest of the public?"

The rest of the transfer to the AGGV includes historic scenes of early Victoria and a few religious works, the bulk of them painted by two of the sisters who also taught art at the St. Ann's Academy.

The AGGV has also announced plans to mount an exhibition in 2013 to highlight the role the sisters played in the history of women in art in British Columbia.

"They could have offered it any number of places," Hughes says, "and I'm really grateful that they felt we were the logical place for it."

In the search for Emily Carr's mystery man, clues start to emerge
October 3, 2011 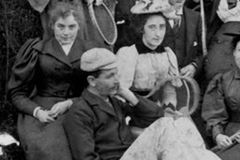 Is this the man who broke Emily Carr's heart?
January 20, 2011
Follow Marsha Lederman on Twitter @marshalederman
Report an error Editorial code of conduct
Due to technical reasons, we have temporarily removed commenting from our articles. We hope to have this fixed soon. Thank you for your patience. If you are looking to give feedback on our new site, please send it along to feedback@globeandmail.com. If you want to write a letter to the editor, please forward to letters@globeandmail.com.
Comments