The year-long party celebrating Canada's 150th begins Saturday evening in Ottawa when 400 local schoolchildren form a line to relay a burning torch from City Hall to Parliament Hill where they will relight the old Centennial Flame. If you read about this event organized by the City of Ottawa on its Ottawa 2017 website you might get the impression that the display of light ends there; in truth, the torch relay is immediately followed by an early fireworks display – organized by the federal Department of Canadian Heritage.

That's typical of the way in which Ottawa 2017 is piggybacking on other events to get the most bang for very few bucks. With a budget of $40-million – and that includes the cost of gifts in kind – the city is organizing a year's worth of events celebrating Canada and its capital in a bold plan that is equal parts opportunism, chutzpah, frugality and panache. Faced with long-standing ambivalence toward the national capital from federal politicians, the City of Ottawa decided to make its own party.

There's some political history here. In 2013, the Conservative government shifted programming duties performed by the National Capital Commission to the Department of Canadian Heritage. This stripped the NCC of its association with such popular and high-profile events as Winterlude, leaving it only to manage its sometimes onerous real estate portfolio, from the Rideau Canal and Gatineau Park to the Prime Minister's Residence at 24 Sussex Dr.

The main goal, however, was to move responsibility for commemorations from the arm's-length and potentially independent NCC to the office of a political minister who could be counted on to ram through that ridiculous plan for a memorial to victims of communism located next door to the Supreme Court on Wellington Street.

Thankfully, the inappropriately placed memorial is getting a major rethink under the Liberals, but that doesn't change a situation that left all responsibility for 2017 with a ministry that is structured to dispense cultural grants, not produce cultural events – and that needs to spread its spending across the country. Imagine the outcry if the federal government picked a metropolis – Toronto, say – to represent 2017 the way it once picked Montreal to represent 1967. Well, Ottawa has picked itself.

Of course, Heritage does have lots of 2017 stuff on the go, including programming in Ottawa on New Year's Eve and beyond. It is dispensing $100-million to the groups that are organizing 38 national projects, such as recreating the voyage of settlers travelling to Quebec from New France, or compiling a list of the 150 best Canadian films for purposes of restoration. It is also giving another $100-million in small grants to community endeavours across the country.

And the feds are contributing $5-million toward the City of Ottawa's 2017 program, which also benefited from a $9-million grant from the province of Ontario and has found the ideal corporate sponsor in CIBC: The bank is also celebrating its 150th anniversary in 2017.

That's typical of the way Ottawa has seized on parallel opportunities, including playing host city for the Juno Awards, the Grey Cup and the Canadian Video Game Awards, as Mayor Jim Watson looks to 2017 as a year that will reshape the city's tourism image. The hope is that, as Canadians identify Ottawa as the place to celebrate the 150th, the city will enjoy a 20-per-cent increase in tourists, bringing the total up toward the 10 million mark. The city is targeting both youth and new Canadians in particular, and has picked four areas (arts and culture; sports and physical activity, business, and social life) for programming.

Cleverly, the city has hired Guy Laflamme for the job: He was the manager responsible for the NCC's programming and now brings his skills as an impresario to Ottawa 2017. Perhaps his most impressive coup is to have contracted La Machine, the French street-theatre group, to bring two of their mighty mechanical creatures to Ottawa for a first-ever North American appearance. The dragon and spider (which appeared at the Bejing Olympics in 2014) will be roaming the streets of Ottawa in late July. Another inspired event will invite people inside the half-complete Lyon station on Ottawa's new light-rapid-transit system (opening in 2018) for a sound-and-light show produced by Montreal's Moment Factory.

Meanwhile, every foreign embassy in the city has been invited to mark its national day with food and music at the Aberdeen Pavilion in Lansdowne Park, thus creating a multicultural festival stretching from spring to fall. Other events include the harmonious – there will be a summertime interprovincial picnic on the Alexandra Bridge and an autumn sound-and-light show devoted to aboriginal history programmed as a walk across the Chaudière Falls – and the outlandish: Gourmet dinners will be offered in an open-air "sky lounge" suspended from a crane while the city will also host Red Bull Crashed Ice, the downhill ice-cross championship that will feature skaters hurtling down a course built on the Rideau Canal locks.

It will be New Year's Eve 2017 before Canadians can start judging if the year's events have changed their outdated image of the nation's capital as a dull civil service town that rolls up the sidewalks at 5 p.m. But as the hour of silly hats and noisemakers approaches, kudos to Ottawa for the smart party planning. 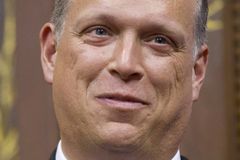 Renovations to help National Arts Centre finally fulfill its destiny
December 14, 2016
Follow Kate Taylor on Twitter @thatkatetaylor
Report an error Editorial code of conduct
Due to technical reasons, we have temporarily removed commenting from our articles. We hope to have this fixed soon. Thank you for your patience. If you are looking to give feedback on our new site, please send it along to feedback@globeandmail.com. If you want to write a letter to the editor, please forward to letters@globeandmail.com.
Comments