It's the biggest show at the Art Gallery of Ontario since its doors reopened almost three years ago in Toronto to strut its Frank Gehry-designed renovation and expansion.

We're talking floors four and five in the gallery's titanium-clad rear end, 1,800 square metres in total, all dedicated to - no, not Leonardo or Monet or Cleopatra but a trio of Canadians who once had the gall to proclaim: "We never felt we had to produce great art to be great artists."

We're talking about the now-defunct General Idea collective, which between 1969 and 1994 manipulated, subverted and ironized seemingly everything in art and society, using every idiom and means possible - photography, sculpture and video, vegetables, acrylic paint and underwear, drawing, performance art, costume, architecture, magazines, posters, poodles - to create a dazzling, dizzying alternate universe, what one member would call "an imperfect simulacrum of a perfect world."

Opening today, Haute Culture features more than 300 thematically arranged works, including such G.I. greatest hits as the One Day of AZT/One Year of AZT installations, the Triple X blue paintings and all 29 issues of FILE magazine, which Jorge Zontal, Felix Partz and AA Bronson conceived and executed, first in Toronto, then in New York. Of course, those aren't their "real" names - Zontal was born Slobododan Saia-Levy in 1944 in Italy, Partz was born Ronald Gabe in Winnipeg in 1945 and Bronson was born Michael Tims in 1946 in Vancouver. But, as the Boys might have observed, what is reality anyway but a construct of fiction and fact, desire and belief, action and reaction?

Of course (too), Haute Culture could only have been conceived and curated by a Frenchman - the critic Frédéric Bonnet, with an assist from the AGO's now-former director of modern and contemporary art, David Moos. It was Bonnet who installed the original, albeit smaller, edition of Haute Culture in February this year at the Musée d'Art Moderne de la Ville de Paris. One says "of course" because Europe "got" General Idea before North America, certainly well before the United States did. As well, G.I. was fed on the mother's milk of theory provided by French artists and writers such as Duchamp, Lévi-Strauss, Barthes, Cahun, Klein and Baudrillard.

Perhaps a paragraph back I should have said "weren't their real names." Because only Bronson - he of the bushy grey beard, the big glasses with the plastic frames, the black cane and the business card that reads "Healer" - survives. Zontal died of AIDS-related causes in Toronto in February, 1994, ditto Partz a few months later, both nursed to their respective ends by Bronson, a self-described "midwife to the dying … who was good at it."

Visiting Toronto recently from his home in New York, where, among other things, he's been studying for a master in divinity at Union Theological Seminary ("I wanted to see how Christianity fits into the bigger picture"), Bronson, now 65, confessed that his "brain has been working more" on a Berlin-bound exhibition of his own pre- and post-General Idea solo creations than on the G.I. retrospective.

"I try to focus more on the present than the past," he said in his high, cracking voice, "as much as the past keeps trying to draw me back."

Not that Bronson finds General Idea a millstone. By his own admission, he was the most archivally inclined of the trio ("I tended to keep everything") - a propensity he traces, in part, to his admiration for the way Andy Warhol would ceaselessly fill banker's boxes with stuff, and also to his youth as the son of a Canadian Air Force pilot.

"We travelled around and I would basically empty the local library in the three years we were there before we moved on. I'd go, like, one section at a time, read all the anthropology, all the architecture, all the mythology. And I'd get desperate when I ran out."

Winner of a 2002 Governor-General's Visual Art and Media Award, Bronson, in fact, has no formal art training, having dropped out of architecture school at the University of Manitoba in the late sixties to move with fellow drop-out Felix Partz to Toronto's now-legendary alternative college/commune Rochdale. While there, they met Zontal, a Venezuelan national ostensibly en route to Vancouver from Halifax where he'd been studying - what else? - architecture at Dalhousie. Soon enough, the trio was living together in a dumpy downtown Toronto house with a big window which they proceeded to fill with sundry installations and displays.

Asked why they lasted so long, through health and sickness, until death made them part, Bronson thinks "the fact we were so incredibly different from each other was a big part of it. It was a kind of tripod structure where, if you remove any one person, the structure collapses. If you're trying to arrive at consensus, three is the smallest number, and the easiest, at which to do that. All our decision-making was by consensus - a kind of outgrowth of the hippie era, the commune philosophy.

"Basically," he said with a laugh, "we indulged in group therapy every morning over coffee. That's what it came down to. We structured our whole life as an artwork, in a sense, so that everything that happened in that structure had some sort of meaning."

Was it in any way a relief to be freed from this structure when Partz and Zontal died? No, Bronson replied. In fact, "it became more difficult to make decisions because I was so used to doing that by consensus. I wasn't quite sure how to do it by myself. Pretend the other two are sitting on my shoulders?"

To this day, neither Bronson nor any of his associates from back then can recall who came up with the G.I. moniker. "I think it was originally the name of a project that we were doing, that people misunderstood and thought it was us, so we just left it that."

The serendipity of misunderstanding also played a part in Bronson's own nom d'art. In 1970, while co-writing a porn novel that was subsequently "banned and seized by the police and burned," Bronson, or maybe the publisher, felt a nom de plume was in order andcame up with A.L. Bronson. The name was duly printed on the novel's cover but after it disappeared, "for some reason, everyone started calling me AA Bronson." The name stuck - so much so that it was "only 20 years later" that Bronson himself realized AA was a mistake, and that, in fact, his real fake name was A.L.

For convenience's sake, the history of General Idea tends to be divided into two parts. There's the pre-1987 period when the Boys explored "the idea of incorporating the commerce of art and the economy of the art world into the art itself."

Two major manifestations were the Miss General Idea Pageants (the first in 1970), at once a spoof of beauty contests and an allegorical rumination on hype, glamour, artistic creativity and the production of cultural value. The other was the 1984 Miss General Idea Pavillion, conceived in the early seventies as a never-to-be-realized building that instead became "a frame of reference" for all sorts of work, including architectural drawings and goofy objets d'art ostensibly destined for inclusion in the Pavillion.

Post 1987, G.I.'s creativity was galvanized by the HIV-AIDS epidemic. Invited to produce a work for a fundraiser hosted by the American Foundation for AIDS Research in New York, the trio came up with its now legendary appropriation of Robert Indiana's 1964 LOVE logo, using the letters AIDS instead. A painting at first, the logo soon went viral, as posters, billboards, stamps, wallpaper, lottery tickets, sculptures, even an electronic crawl above Manhattan's Times Square.

The irony, of course, is that the first logo pieces were produced before either Partz or Zontal tested HIV-positive. Once they did (Partz in 1989, Zontal a year later), the disease, in true G.I. fashion, consumed the trio's lives and artistic production, resulting, in 1991, in one of the troupe's signature works, One Year of AZT, a room-sized installation of the 1,825 anti-viral pills, reproduced as vacuum-formed styrene lozenges, that Felix Partz was taking.

Seventeen years after G.I.'s demise, Bronson confesses he's pleased that the AGO is hosting the trio's retrospective, even provocatively positioning one of its AIDS sculptures outside, near Henry Moore's Two Large Forms. The gallery, venue for many G.I. events and installations over its nearly three-decade career, now includes more than 400 G.I. artifacts in its permanent collection (close to 110 of them are in the retrospective).

At the same time, Bronson is, well … amused that Haute Culture is taking place there. "They're so focused - I don't know if I should say this in the interview - so focused on masterworks," he said, referring to the gallery's current show of Abstract Expressionist paintings elsewhere in the building, as well as upcoming exhibits of works by Chagall and Picasso.

G.I. arose, in part, in "opposition to the assertion of the discrete so-called masterpiece," as David Moos writes in the exhibition catalogue. Yet here's G.I. duking it out with de Kooning, Pollock and the other macho men of Abstract Expressionism. "It just seems so out of character," Bronson said with a hearty chuckle. But you could tell he was relishing the irony.

Photos: The General Idea - selected images at the AGO
Gallery
July 29, 2011 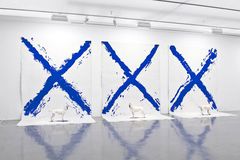 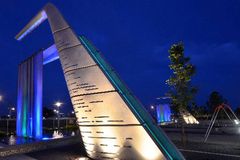 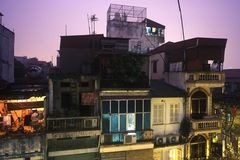