Some documentaries delve so deeply into characters' lives, they defy a quick synopsis. Case in point: Prodigal Sons , an award-winning film coming to Toronto's Rendezvous With Madness Film Festival.

The film focuses on a series of family reunions in Montana involving Kimberley Reed, a transgender woman dealing with an emotionally disturbed brother. Both are not only coping with the memory of who they once were, but also their family, which might be described as all-American.

Prodigal Sons is directed by Reed, who turns the camera on herself as she tries to gather up all the pieces of who she is: Old photos, old memories, her new life, her new career.

Like some of the other mental-health documentaries in the festival - from Unlisted: A Story of Schizophrenia , about a doctor helping her mentally ill father and which makes its world premiere at the festival, to Devil Plays Hardball , about a mentoring program in Vancouver's Downtown Eastside - Prodigal Sons is a personal journey constructed from myriad bits and pieces.

For Reed, the journey chronicles meeting her violence-prone brother again, his medication schedules, and desperate phone calls to social-assistance programs. All the while, she is also coping with her own identity, as she returns home for her high-school reunion as Kimberley - seeing people who knew her 20 years ago as Paul, the school's star quarterback.

In the end, Reed is a thoroughly engaging, intelligent woman, who would captivate audiences even if she didn't have such a complicated back story. But Prodigal Sons also has the kind of drama Hollywood could never match.

"If you wrote this as a novel or a fiction film, no one would buy it. They'd say, 'This is too incredible.' But because this is a documentary, we know it's real," says the festival's program manager Matthew Hogue.

And "real" has extra importance for a festival like Rendezvous With Madness. Among the films being shown, the documentaries will be seen in a different light by health-care professionals than by lay people in the audience.

"As they are having their discussion, we'll get the sense of the professional perspective from a psychiatrist, and often it's very different from [views] of the person with the lived experience," says Hogue. "For the mental-health professionals it's great, because it gives them a real insight that they wouldn't have otherwise. Not only are they engaging [patients]in an equal way in a panel discussion, but the films present the issues in a way that maybe hasn't been thought of before."

For instance, a patient participating in a panel on psychosis last year said to a psychiatrist, "I'm really glad you're not my psychiatrist." "And she went off to give an entirely different way on how she thought this person [in the film]should be treated successfully based on her own personal experiences," Hogue says. "That kind of stuff happens all the time."

He cited another example following a film about drugs and addiction in Toronto. A psychiatrist in the discussion was saying that the film blows the problem out of proportion, that it's not so simple to get drugs. But a former addict on the panel chimed in: "I don't know what you're talking about, but I can literally have drugs in five minutes, and I've bought drugs outside here a thousand times." 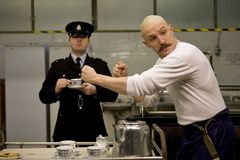