We need to talk about Shad.

Last April, when he took over as the permanent host of Q, CBC Radio's flagship arts and culture show, rapper Shadrach Kabango's new bosses probably would have showered him with praise for simply showing up every day with a smile for his co-workers. After the monstrous reign of Jian Ghomeshi, his explosive firing and the ensuing six-month tumult of guest hosts and sometimes awkward on-air auditions, CBC executives seemed to be choosing Shad partly because he has an enduring niceness; he's the anti-Ghomeshi.

In his first show, a high-wattage two-hour affair at Toronto's Glenn Gould Studio, Shad proved to be an adept ringleader, juggling chats with podcasting comedian Marc Maron and spoken-word performer Shane Koyczan, playing straight man to pop-culture astringent Elvira Kurt, probing the musician known as Bahamas on his song-writing process, cheering throat-singer Tanya Tagaq and moderating a brief sports-culture panel discussion. If he wasn't wholly comfortable doing live interviews – the core task of his job – producers had engineered a sleek vehicle that could all but operate on autopilot.

But seven months in, it's clear that Q still needs a strong hand at the wheel, someone who not only wants to drive but who knows where he wants to go. Shad's written introductions are as stilted and flat as they were in April; he can't seem to lift the words off the page. And the flaws in his interviewing style – in which he assiduously hews to a list of prepared questions and rarely follows up on anything his subjects say – have been sharply exposed during some recent high-profile sit-downs.

Listening to Shad is an exercise in frustration, like being a hockey mom who sees all of the possible plays her son could make and yet knows in her sinking heart that you just can't teach puck instinct. And listeners are noticing.

Last week, the Q team flew to New York for perhaps its most heavily hyped interview since Shad took over, with the British singer Adele. It aired in two parts on that Friday's Q, and a TV edit concluded The National that night. Over the course of almost 30 minutes, she talked about the new album's laboured genesis, her ignorance of social media and how she juggles being a global pop star with her desire to be deeply involved in the life of her young son.

Every minute or two, Adele dropped a nugget that could have proved fascinating to pick up and study; Shad seemed more interested in ensuring he got through all of the questions on his sheet. Numerous times, Adele implied that parenthood – she gave birth three years ago, after her previous album became a runaway hit – had wholly changed her view of both herself and her career. At one point, she spoke thoughtfully of wanting to build a legacy for her son, "not in terms of my career, but, like, every single thing I say: How I interact with my friends, the bonds I have with my friends' partners and kids. That's all part of the legacy that I'll be leaving for my child."

Shad's follow-up question began: "You worked with some big songwriters …"

On Facebook, fans offered their critique. "How about a 'conversation' instead of just asking questions and not reflecting on Adele's answers. Her heart's on her sleeve and she was totally true with you but you let some pretty amazing candid responses float away …" wrote one listener, while another compared the interview unfavourably to the singer's encounter with the BBC's Graham Norton. A third said: "Simply reading out a list of questions seems to be Shad's 'thing' – so many wasted interview opportunities, truly frustrating! I rarely tune in to Q these days."

In fact, ratings are down. Q ended last season with an average of about 250,000 listeners. This season, which began in September, it is averaging roughly 233,000 – a drop of almost 7 per cent.

The show is still heard on 166 U.S. public-radio stations.

(Disclosure: I participated twice in the show's media panel during the guest-hosting period; I have not appeared since Shad took over.)

Radio and TV interview shows are collaborative efforts, and it is admirable that Shad frequently refers to the Q "team." But when the red "On Air" light goes on, a good host pulls all of the team's preparatory work into him or herself, and alchemizes it into something personal. You can hear this on Q when there's a guest host in the chair, such as Piya Chattopadhyay or Tom Power. Working with the same team as Shad, they make magic.

Last Monday, Gill Deacon sat in for Shad and, from the opening moments, filled the airwaves with a beguiling conversational tone. In her first interview, with singer Tom Jones, she pulled listeners in close by allowing herself to be a little bit girly, a little bit thrilled with her fortune. But she had backbone, too: Later, interviewing the comedian Josh "The Fat Jew" Ostrovsky, who has been obstinate in the face of accusations that he plagiarized jokes, she repeatedly pushed back against his denials. It made for spiky, uncomfortable, alluring radio, and it made you want more.

There's something else. In Deacon, you can hear echoes of Ghomeshi – and Peter Gzowski before him – in how she picks up on something a guest has said, formulates a question and then reformulates it again before allowing the guest to reply. You can hear the wheels turning; she is intellectually engaged with the material, so we are, too.

Earlier this fall, The New York Times magazine ran a fascinating profile of Terry Gross, the grande dame of U.S. public-radio hosts. Gross, 64, has hosted NPR's daily interview show, Fresh Air, for 40 years now; her show is a masterclass in the art of getting people to open up. Last year, when the Ghomeshi scandal blew up, an executive with Southern California Public Radio told me that, within the public-radio system, Ghomeshi had been regarded as a possible successor to Gross.

Both Fresh Air and Q recently broadcast interviews with the U.S. artist/musician Laurie Anderson about her new documentary, Heart of a Dog. Anderson can be a tough interview, so Gross allowed the encounter to find its own rhythm. We heard devastating anecdotes about death, meditation, Anderson's childhood and a plane crash she had been in. It made for riveting radio. Shad, for his part, seemed fixated on Anderson's late dog, Lolabelle, the titular pet of the film's title. He spun his wheels on a few other queries, never really finding traction.

It's hard to know exactly why Shad is failing. He showed promise last January in his week-long audition stint. During an interview with opera singer Christine Goerke, she talked about an incident in her early career when she feared for her voice. You could hear him empathize: listening and extending himself toward her. They dropped down a rabbit hole together, and brought us along for an intense discussion about the psychological dimension of our voices.

Those moments are far too rare. Last March, I asked Shad if there was one particular song of his which he felt best represented him. He referred me to a YouTube video called Hot Dog Garbage, a six-minute, single-take rap. "It's not exactly a song," he explained, "but it's the most representative, because that's my passion for hip hop right there. That's me starting out, rapping with my friends, just goin' off – a range of topics, just trying to be entertaining. Just trying to make one friend laugh."

You can see that Shad - magnetic, electric - whenever he performs onstage. It's time he showed up in Studio Q, too.

Six things to take away from Shad and CBC’s redesigned Q
April 20, 2015 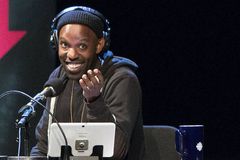 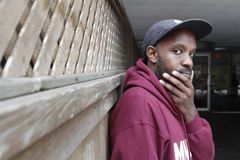 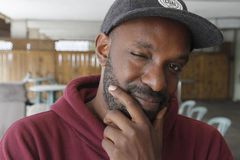