I watched a fine Canadian film this week. Most of it was in Russian.

Natasha, adapted from his own short story by writer and director David Bezmozgis, features an extended family of Russian immigrants living in suburban Toronto. Mainly, the family members speak to each other in Russian; occasionally they speak to other people in English. This feels like a realistic depiction of many Canadian communities but if Telefilm Canada, the federal film investment agency, had been strict in its application of its own rules, Natasha might not have been made.

In theory, Telefilm only funds projects in English, French or aboriginal languages. In practice, the agency's staff have some leeway as they evaluate both the financial and artistic merit of applicants' projects, and Natasha was deemed worthy. Maybe it helped that in one scene an older immigrant tells a homesick teenage girl who is pining for Moscow that some day she will recognize Canada has a lot to offer.

But here's hoping that nationalist sentiment didn't make any difference at all. The thing is, there isn't much point discussing Natasha's Canadianness: It's a film written and directed by a Canadian, starring Russian-speaking actors from across North America, and shot in Toronto by a Canadian crew. It nicely fits that old aphorism: As Canadian as possible under the circumstances.

For the first time in more than a decade, the public is being encouraged to consider such issues as the federal government launches a review of cultural policy, hoping to update regulations to fit digital realities.

One thing that is also going to need updating is our preconceptions about what's Canadian.

Twenty or 30 years ago, policy debates filled with discussions about the nature of Canadian culture were common political currency. In marked contrast to their 21st-century successors, the Brian Mulroney Conservatives were convinced of the necessity of cultural protections and negotiated a North American free-trade deal that included a broad exemption for both cultural products and regulations. The Chrétien years saw fierce budget cuts, but the Liberals of the 1990s certainly believed in subsidy and protection of culture in principle – and perceived a crisis of national identity surrounding the 1995 referendum over Quebec sovereignty. It was in those years that the phrase "Telling Canadian stories to Canadians" became the pat reply when anybody asked why the CBC exists or why Canadian films get tax breaks.

The notion that Canadian culture could somehow craft a national identity strong enough to counter a Quebec identity or an American identity hovered behind this approach, but in truth, there are many Canadian identities, and individual cultural creations are never the best servants of political policies. To this day, critics of the CBC express squeamishness about what they clearly view as an attempt at social engineering. If you determine that culture is supposed to be moulding or shaping citizens, or even just reflecting some particular theme or place, you tend to limit its scope and its imagination. For the most part, the people who award the subsidies or draft the regulations know this – which is why somebody smart at Telefilm decided that Natasha qualified for investment – but it's an issue that threatens to rise up again as the debate begins anew.

There is some pressure from the screen industries, for example, to loosen regulations covering the number of foreigners you can include in movies or TV shows and still qualify as Canadian for the purposes of tax credits. These are demands partly driven by overconfidence in the ability of American and British stars to sell productions, and partly by the desire for easier access to money from international partners. There are those who argue that to thrive in the age of global, digital distribution, Canada needs to be creating international content that is not identifiably Canadian – think of the historical TV series Vikings, for example; it's an Irish-Canadian co-production.

There are cases where the internationalist approach can work fine, for reasons both artistic and commercial. Unless you know Toronto intimately, you might believe the sci-fi series Orphan Black takes place in an American city; the movie version of Room moved that novel's generic North American setting to Akron, Ohio. There are also cases where it's clearly the reverse: The 11 foreign broadcasters who picked up Republic of Doyle must have figured their viewers would warm to the distinctive Newfoundland setting.

Mainly, creators and producers need flexibility because you never know when the next Natasha is going to come along, all ready to tell Canadians a Russian story. Despite the nationalist sentiment that originally drove them, Canadian cultural regulations have wisely tended to focus on the citizenship of the creators rather than recognizable settings or prescribed themes. The best definition of Canadian content remains a tautology: It's content created by Canadians. 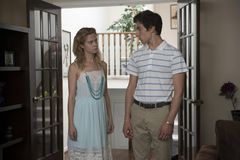 Q&A: David Bezmozgis on why he wrote The Betrayers, the best advice he’s gotten and more
October 10, 2014