It's the morning after the night before and, in a posh Manhattan apartment, Brandon lifts his nude body out of bed to pad across the polished hardwood. Seen full-frontally, that body is clearly in splendid shape.

As for the mind, his hollow eyes tell a different story, flashing back to last evening's cold encounter with another pricey call girl. On the answering machine, a series of pleading messages from his sister go completely ignored. Instead, he dresses for work at an investment firm, where his computer, beneath its professional surface, harbours a stash of explicit pornography. Thirtysomething, handsome, affluent, Brandon is in the prime of his life – and Brandon has no life.

Such are the opening frames of Shame, near-wordless but, like much of this film, profoundly disturbing. As he did in Hunger, director Steve McQueen moves his camera informatively through the silence, with eloquent precision, and once more his primary focus is actor Michael Fassbender.

In Hunger, Fassbender played the IRA activist Bobby Sands, willfully starving in the Maze prison and using the only instrument available, his emaciated body, to make a plea for freedom. Here, as Brandon, he's again naked, but this time the body is its own robust prison. The man is trapped in a hell of physical desire detached from any emotion. Sexual acts, obsessively repeated, are the bars on his cell.

Of course, movies have always been hooked on sex, but sex-addiction is a whole other matter. As a social issue, a victimizing ailment, it's obviously tough to dramatize sympathetically. The script's honesty, McQueen's artistry, and Fassbender's tortured performance go a long way to solving that problem – not far enough, ultimately, yet still an impressive distance. This is a provocative and unnerving picture.

Certainly, women are attracted to him, not just to his looks and money but, perhaps more important, to his cool detachment. Yet that very detachment doubles as his curse. And he knows it. Fassbender's nuanced work, especially those vacant eyes, show that Brandon is sensitive to his sickness and suffering in his hell. He doesn't feel much, but he does feel shame.

That's poignantly evident when Brandon reaches out to a female colleague, arranging an old-fashioned dinner date that McQueen shoots in a long static take. There, the prisoner of sex experiences a faint stirring of actual feelings, and the cell door opens a fraction, only to slam shut later in a graphic and painfully charged encounter – it's an acutely emotional scene about the failure of emotion.

Elsewhere, that failure is embodied in Brandon's troubled relationship with his younger sister. Frustrated by those unanswered messages, Sissy (Carey Mulligan) sneaks into his apartment and is also naked when we first see her, but for a different symbolic reason. Emotionally needy, openly vulnerable, she's his polar opposite.

There, at the other end of the spectrum, Mulligan matches Fassbender's performance note for perfect note. A mass of brittle energy, Sissy is desperately looking for commitment, from a string of dubious boyfriends and particularly from her brother. Whereas he can't connect sex to love, she can't distinguish the two, and, consequently, their push-and-pull entanglement has a dark, near-incestuous tension.

Unlike him, though, Sissy possesses an outlet for her depression. She's a singer and, in a classy lounge, her bluesy take on New York, New York is a stunner, turning that normally up-tempo standard smack on its head and investing the clichéd lyrics with eerie new meaning: "Start spreading the news … "

Alas, the final act is a disappointment. It sees the siblings plunging into their separate vortexes. But save for a single remark from Sissy ("We're not bad people, we just come from a bad place"), the screenplay does nothing to explore the roots of their suffering.

Here, McQueen's dislike of conventional exposition, often his strength, becomes a glaring weakness, robbing the characters of motivation and the theme of resonance. Hunger's explosive conclusion was frighteningly real and devastatingly complex. Shame's seems contrived, flirting with melodrama. Yes, this is an affecting picture that leaves the viewer as wrung out as the protagonist. No doubt you'll be seduced but, in the end, you may also feel abandoned. 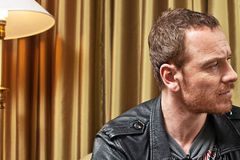