Sherbourne Common marks the end of the park. Or, at least, the end of the conventional park. Here is a beguiling landscape, injected with rays of electric blue at night, that sits atop a vast, brainy infrastructure. Below a splash pad, where kids frolic by day, polluted water from Lake Ontario pours through ultraviolet cleansing tanks before being pumped up through celebratory water sculptures. A park of this kind may be a first for Canada and even North America, but it surely will not be the last.

Nature no longer exists. New nature is what we cultivate in our cities. Today, the urban farmers are planners, landscape architects and clean-tech innovators who plot to remediate the toxins left behind by the city's industrialists. Historically, parks have been designed as picturesque snapshots – psychological escapes from urbanity. With Sherbourne Common, which opened this week, the mandate has been to heal a neglected part of the waterfront by providing a neighbourhood-wide water-treatment facility immediately below the park's surface.

The Common extends in two parcels of land from roaring Lake Shore Boulevard to Queens Quay, and, from there, south to the lake's edge. Its northern zone is the more austere of the two, with a ground surface divided, as if still on a drawing board, into pedantic textures: a yellow rubber surface for playing; loose, fine gravel; ipe hardwood decking; and narrow swaths of grass.

Luckily, there is also an abundance of life-giving trees and water. Water cleaned with UV light shimmers as it flows down chain-mail screens – held by curved nine-metre-high concrete arms – into raised pools that extend generously to Queens Quay. From there, the water gushes south into long troughs densely planted with native grasses selected for their ability to help clean water through bio-remediation. It then flows across the street toward Lake Ontario, nudging pedestrians to one side, before bursting above ground in spikes erupting from the splash pad.

The Common promises new life in the winter season, too. Ice will be allowed to form along those chain-mail screens – a rare concession to whimsy in this country, though not in the fantastically frozen fountains of, say, Paris. Set behind a lush planting of trees and grass, the splash pad becomes a skating rink when temperatures drop below freezing.

The iconic gesture here is a brooding pavilion, intended as a sculpted piece of architectural jewellery discreetly clad in the dull patina of Canadian zinc. To ennoble public washrooms and a future café with architecture by esteemed Teeple Architects is laudable, to be sure, and there's an exhilarating curve to the front of the pavilion finely rendered by Eastern Construction – although it must be said that, from a distance, the building looks stubby and forgettably grey.

Invisible to the eye, located below the public washrooms, are the brains of the sewage-treatment facility: a series of disinfecting machines that use ultraviolet light – not the chlorine of yesteryear – to clean water from the lake and the run-off of surrounding roads, highways and buildings. In North America, where dirty water tainted with E. coli bacteria can be found flowing like nasty rivers into our lakes, this cleaning process is a rare phenomenon.

"Vancouver would be very envious to have this," says the Common's landscape architect, Greg Smallenberg, whose firm, Phillips Farevaag Smallenberg, is based in that city. Without $27-million in funding from the federal government, Sherbourne Common would have never happened – and Toronto would be without a new public asset on what were previously underused lands. From Chicago's Millennium Park to Denmark's Copenhagen Harbour Baths, the investment in the public realm is a no-brainer. Albeit on a smaller scale, Sherbourne Common is sure to earn dividends in enhanced tourism for Toronto, as well as invigorated neighbourhood economies, and the rebranding of the city as a place with an intelligent future.

The project was also importantly buoyed by the leadership of the non-profit agency Waterfront Toronto. What might have been another pretty park has become a subtle intertwining of public art, architecture, landscape and sustainable infrastructure. Smallenberg's team included Vancouver-

based public artist Jill Anholt – the creative mind behind the blue-light monuments – and Toronto architect Stephen Teeple. Once they were selected from a short list, they brought on board the Municipal Infrastructure Group Ltd. to chart the storm-water management, and Trojan Technologies, an Ontario leader in clean tech, to provide equipment that allows for the ultraviolet water disinfection.

In every imaginable way, meanwhile, the tectonic detailing is superb: in the chic ipe wood and back-lit acrylic benches; in the custom recessed lighting on the ground; in the park pavilion's panels custom cut to fit custom curves. Passing by the park on foot, even driving fast along the Gardiner Expressway, it's easy to be startled by the eerie blue aura emanating from Sherbourne Common. "Rather than cycling through all the possibilities of the colour wheel, I wanted a colour chosen with intention," Anholt says. Visitors will also discover, when they walk past the watery veils, motion detectors at play that briefly turn the blue lights green.

Sherbourne Common is only the latest investment in the public realm along Toronto's eastern waterfront. There is a new, generously scaled boardwalk, with curved wooden benches and double allées of maple trees, so unlike most of the city's mean-spirited sidewalks. And connected to it is Sugar Beach, located one block west of the Common and designed as an impressionistic stage set with pink umbrellas and pristine white sand. When a boldly coloured freighter anchors alongside the beach, it's like watching a Magritte painting fast-forward through time.

By contrast, Sherbourne Common is like a finely crafted chess set: It requires some time, and contemplation, before its rewards pay off (and more expository signage would be useful to reveal the underground masterworks invisible to the eye). Still, no matter the pummelling the city is getting these days by its own mayor, citizen expectation for invigorating, intelligent public parks will be aroused by the Common. There's no mystery to that desire: Only a fool would want to beat the city down rather than building it up from the ground.

Location: Just east of Toronto's Lower Sherbourne Street, from Lake Shore Boulevard to the water's edge, on both sides of Queens Quay Boulevard

Innovation: Ultraviolet treatment of polluted lake water and runoff from roads and adjacent buildings within the emerging neighbourhood. 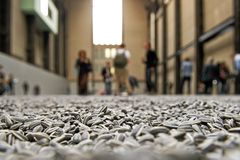 Toronto's gridlock is never going to be beautiful
May 3, 2018 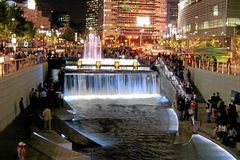 Glacier Discovery Walk: A heroic design link to nature
May 3, 2018 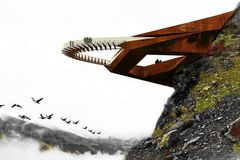 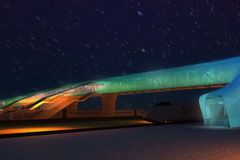