For a brief while, it looked like a heist for the ages – an 18th-century Venice scene by a painter whose works have sold for millions recently, cruelly ripped from its frame on the wall of its cozy Canadian university home.

Alas, the reality is proving more mundane. The stolen painting Toronto Police attributed in a release last week to Francesco Guardi is not, in fact, by the Italian master. Indeed, no one seems to know who Church of Santa Maria della Salute and the Dogana, is by, according to the college that owns it. The oil is one of what police are calling "three valuable paintings" stolen from buildings at the University of Toronto between Jan. 30 and Feb. 10.

Trinity College, owner of the Guardi manqué, says police accidentally misattributed the painting to Guardi (1712-1793) instead of to "after Guardi" – that is, to an anonymous follower or imitator of Guardi – as Trinity officials claim they told police when originally reporting the theft.

The correction in attribution is significant since the real Guardi often is spoken of in the same breath as such other famous Venice masters as Tiepolo and Canaletto, his loose, feathery brush style seen, by some, as an anticipation of Impressionism.

In the past four years, at least two genuine Guardis have sold for tens of millions of dollars at auction in London. (Phone and e-mail requests last Friday to Trinity and U of T media relations for more information on the alleged Guardi were not answered, except for the release of an e-mail saying the university was "co-operating with [the police] investigation.")

The Trinity painting, a 36-by-44-centimetre oil on canvas, unsigned and undated, was removed from its frame in a private dining room at the college between the evening of Feb. 8 and the morning of Feb. 10. The small work has been in the college's permanent collection for decades, but Trinity has no record of when it was acquired or from whom. "Our records describe it as 18th century, 'after Guardi,'" Sylvia Lassam, Rolph-Bell archivist at Trinity College, told The Globe and Mail in an e-mail this week. "Several appraisers, most recently in 2012, have ratified this attribution."

Last Saturday, Ms. Lassam contacted 52 Division, the hub of the Toronto Police investigation into the art theft, to tell it that the attribution to Guardi on its website and media release was wrong and needed to be changed, to "after Guardi." As of 5:00 p.m. Wednesday, however, the painting was still being identified by police as a genuine Guardi.

The other paintings still at large, both stolen from buildings at Victoria University at the U of T, are Morning at Peggy's Cove by Nova Scotian William E. deGarthe (1907-1983) and Credit River by the Canadian-educated Chinese artist Yee Bon (1905-1995). As with the "after Guardi," the frames for both works were left behind in the theft.

Three paintings stolen from the University of Toronto
February 13, 2015 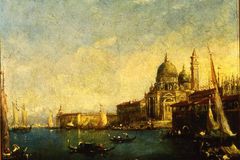 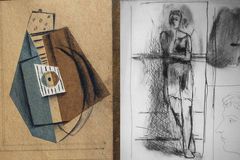 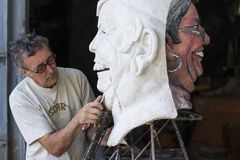