The sight of the killer whale Tilikum, abjectly floating in a corner of his pool at Seaworld in Orlando, Fla., his dorsal fin permanently tilted to one side, may be one of the saddest sights you'll see in a movie this year, even if the whale may well have caused the death of three people.

It's the assertion of Gabriela Cowperthwaite's potent documentary Blackfish that Tilikum wasn't born a killer but made that way, and that places like Seaworld, which make millions annually by entertaining people with "trained" marine mammals, might be putting trainers and the public at risk by denying these massive, magnificent animals their freedom.

As more than one orca expert points out in the film, when you take a creature born to roam thousands of miles of open water and stick it in a pool to do tricks, there's going to be some behavioural blowback. In Tilikum's case, it's actually described as a form of induced "psychosis."

Already the subject of some controversy, and not surprisingly denounced by Seaworld as "shamefully dishonest" and "deliberately misleading," Blackfish nevertheless mounts a powerful case for the fundamental inhumanity of using creatures like Tilikum – intelligent, affectionate and fiercely family-oriented – for purposes of high-profit amusement. Among other things, we learn that in their natural habitat, whales like Tilikum are killers in name and lore only.

When permitted to live their lives in extended family pods that are never separated, killer whales don't kill anything. Never mind the ridiculous 1977 marine panic epic, Orca. In their natural lives, these whales never bother anybody.

This of course makes Tilikum's case especially disturbing, raised as he was largely in captivity and denied the otherwise fundamental orca ties to family. (That he's a high yielder of valuable sperm for theme-park breeding purposes only darkens the irony.)

Over the course of tracking his history, Blackfish – the Native American term for a creature endowed with mystical powers – traces not only how this top attraction has been involved in the deaths of three trainers, but how the entire enterprise of keeping orcas in captivity runs dangerously counter to the way these mammals live naturally.

Although it won't come as any surprise that no Seaworld representatives agreed to be interviewed for the film – if you ask me, not the best way to plead your case – the relative absence of any point of view but the one advocated by the movie, and so sadly evoked by the image of Tilikum floating in the corner of his pool, makes Blackfish a rather narrow experience. Powerful yes, but lacking in the kind of scope that might have made it something even more damning.

Nevertheless, Blackfish makes an especially strong case for the innate marvel of these animals: that they are smart, social, communicative and loving.

Which only makes Tilikum's plight that much more wrenching – though not, it should be added, more wrenching than those whose deaths he caused. Left alone, or in the open with his family pod, the killer in the whale most likely would never have emerged.

Only God Forgives: For Gosling and Refn an unexpected turn
July 19, 2013 The Hunt: Drama strives for outrage, but fails to get the blood boiling
July 19, 2013 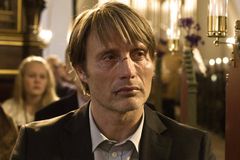