Vancouver's Dancing on the Edge Festival of Contemporary Dance is celebrating its 25th anniversary this year. Since 1988, producer Donna Spencer has presented more than 400 choreographers – a judicious mix of various styles by dance artists from Canada and beyond. Along with the main stage shows, Spencer always includes site-specific work.

What follows are the three pieces that stood out from the crowd.

When That I Was (Nigel Charnock)

Charnock died of stomach cancer at the age of 52 in 2012. This solo from 2007, created for Vancouver dancer Noam Gagnon, has been remounted as a tribute to one of dance's notorious bad boys. It certainly proved to be the crowd-pleaser, judging by the whoops and hollers that came with the enthusiastic applause.

A co-founder of the groundbreaking British physical theatre group DV8, London-based Charnock broke every rule of dance with works that were as perverse as they were provocative. He was lionized on the international dance scene for his risk and daring.

When That I Was is the title of a song from Shakespeare's Twelfth Night, a perfect jumping-off point for an autobiography of Gagnon via Charnock's lurid imagination. The soundtrack begins and ends with a sung version of the famous poem. In between, Gagnon is put through a tour de force of mood and movement.

It opens with three filmed panels of the adult Gagnon being born by placing him in the fetal position in a bathtub. From there, the live Gagnon does a cheeky, hyperkinetic disco number, followed by complicated hand gestures that coincide with rapid-fire text describing his body parts.

Gagnon then discusses his dysfunctional parents and riffs on the things that are a perfect "10" to him (such as his former company, the acclaimed Holy Body Tattoo). The rest of the piece is devoted to musings on love (which includes a dissertation on abortion), set to songs by Edith Piaf, Elvis Presley and Doris Day. There's also a hilarious sequence involving the Canadian flag wrapped like a sarong and performed to the national anthem.

In other words, for 30 minutes, Gagnon is on a wild roller-coaster ride of the highs and lows of his life, the text interspersed by intense physicality that has the dancer fighting for breath. When That I Was is both wickedly funny and melodramatically poignant.

Kramer is an aboriginal choreographer, but her works have universal resonance. This hour-long autobiographical work, set to atmospheric electronica by Pierre-Luc Clément and Cris Derksen and performed by Maria Simone and Lael Stellick, is raw, edgy and moving. The title is completely ironic.

The centrepiece is an intense emotional relationship between a man and a woman. The visual metaphors are a bathtub (her realm of safety) and white shirts on hangers (his expression of pain). These objects play important roles within the shifting moods of violence and despair.

The woman tends to be the aggressor due to frustration. For example, the man has placed his many shirts on the floor. The woman, as a good housewife, carefully straightens them out into a neat row, but this subservient action is followed by rage.

Kramer's movement involves lifts and carries, with the woman often hurling herself at the man, who catches her in various positions. Each clash between the two raises the question of which of the partners is the good moral character.

The ending – with the woman slowly sliding into the tub backward, rendering herself invisible, as the man crouches low to the ground, a silent watcher – is eloquent.

Kramer is a talent to watch. She wears her heart on her sleeve, which translates into dance theatre that is as vulnerable as it is emotional.

This intriguing work is inspired by sketches of robots by distinguished Winnipeg artist Wanda Koop. For Bailie, it is an exploration of artificial life and alien intelligence.

Two visual elements animate the piece. First, the five dancers (Branwyn Bundon, Jillian Groening, Krista Nicholson, Christie Peters and Tiffany Thomas) are rendered anonymous by being completely covered in black. Second, a live camera captures their movements on a large screen behind them.

But here's the rub. Hugh Conacher's camera work can manufacture different kinds of images. The figures are never real-life re-creations. Thus, the dancer's movements on the screen can multiply, for example, as if they have 20 arms, or their bodies can become a collection of pixels that break up and reform, or the human figure can be reduced to a series of tiny specks or black smudges.

What we see in front of us are five black figures executing simple physical movements, both alone or together. What appears on the screen is a huge range of non-human abstractions.

With each change of image, the screen goes to static, so we know to expect a new perspective on the human body.

In short, the choreography is simple while the technology is mind-blowing.

Vancouver's Dancing on the Edge Festival continues at various venues until July 13. 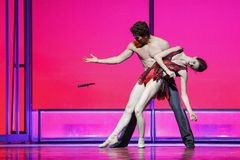 What is Ame Henderson saying with her dance of voice and gesture?
May 23, 2013 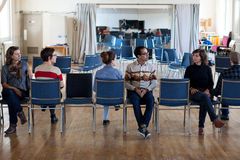 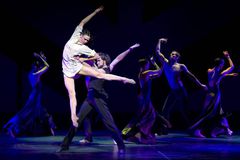 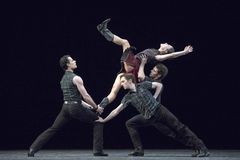