The Hollywood official motto to any kind of success should be, "You can say that again." In 2010, when the first Despicable Me, was released Variety predicted that box-office prospects for the retro tale of a Bond-style aspiring super-villain and three little girls he adopts, looked "solid, but hardly stellar." Yet, Despicable Me went on to earn more than half a billion at the box office, giving Universal a cartoon franchise to compete with Pixar (Toy Story) DreamWorks (Shrek) and 20th Century Fox (Ice Age).

Once again, the super-villain, Gru, and his chattering robot "minions" are back in Despicable Me 2, an animated sequel that, despite not achieving the inspired lunacy of the first movie where Gru literally steals the moon, is smartly calculated to deliver squeals to kids and amusement to accompanying adults.

Though created with computer-generated imagery, Despicable Me had a zany alternative sensibility, with spiky-looking characters and jokes to match, that evoked the art of Edward Gorey, the mischief of Jay Ward's The Rocky and Bullwinkle Show and the irreverence of Looney Tunes cartoons. In other words, it replicates the brash sensibility of the cartoons parents grew up on.

Early scenes catch us up with Gru's life. The now-retired super-villain (voiced in a Bela Lugosi accent by Steve Carell) is a hulking misanthropic foreigner who lives in the only Gothic home on a street lined with cookie-cutter suburban houses full of friendly bland Americans. Physically, Gru resembles an anthropomorphized beetle (or, perhaps, Vladimir Nabokov's description of Humbert Humbert in Lolita as "husky, big boned, wooly chested" with "thick black eyebrows" and "a face that might twitch with neuralgia.") Like any former self-respecting world-class villain, he has an underground lab, overseen by a toothy English scientist (voiced by Russell Brand), and manned by his legion of gibbering "minions" – tiny yellow creatures, dressed in blue overalls and goggles, which resemble a warehouse filled with barbiturate capsules.

As the new movie begins, Gru, who, having adopted three little girls, Margo (Miranda Cosgrove), Edith (Dana Gaier) and Agnes (Elsie Fisher) in the first movie, is struggling to adjust to domestic life. He has converted his lab into a factory for artisanal jam and jellies, while he resists pressure to date more.

He's recruited by a gangly, Olive Oyl-like agent from the Anti-Villain league named Lucy Wilde (Kristen Wiig in her jumpy, oversharing mode) who wants Gru to infiltrate the local shopping mall to learn the identity of a super-villain who is in possession of a "transmutation" serum that can turn ordinary creatures into monsters.

Gru is immediately suspicious of the gregarious walrus-shaped owner of a Mexican theme restaurant (Benjamin Bratt), who has an unmistakable resemblance to a former super-villain, El Macho, who dressed like a masked lucha libra wrestler and who almost certainly died years earlier, riding a rocket tied to a shark tied to 250 pounds of TNT into a live volcano. At the same time, Gru has an entirely personal reason to want to bring the restaurant owner down: The man's mallrat son, a pint-sized Latin lover, seems to have won the heart of Margot, the eldest of Gru's adopted daughters.

While one part of Despicable Me 2 focuses on Gru's parental and romantic dilemmas, his minions are involved in their subplot, in which they are subjected to mass kidnapping and transmutational experiments. The minions serve as a kind of chorus of silent-movie comedians, and their childish antics make them the obvious kid pleasers here, though for adults in the audience, their incomprehensible jabbering may become grating. The minions will get their own movie in 2014, which, judging by the final minutes of Despicable Me 2, will be lively, ingratiating and a lot less despicably clever than its predecessors. 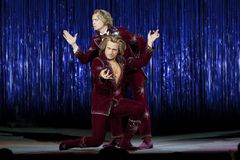 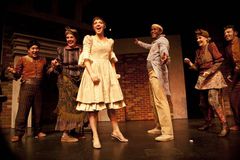