In the summer of 1990, actor Christopher Gaze and some fellow conspirators went down to the water, pitched a tent and staged that sylvan comedy A Midsummer Night's Dream. More than two decades later, Gaze's Bard on the Beach in Vancouver's Vanier Park is the biggest, most ambitious and best attended of all the outdoor Shakespeare festivals in Canada.

Where other alfresco companies offer a play or two in repertory, Bard on the Beach presents four productions. And where others serve repeated helpings of family-friendly, entry-level Shakespeare – Dream being the all-time favourite – the Vancouver troupe has worked its way through almost the entire Shakespearean canon, including such obscure works as Troilus and Cressida (2006) and last year's King John.

And it's still operating out of a tent. Two tents, to be precise: the 740-seat BMO Mainstage and the 240-seat Douglas Campbell Studio Stage. They bookend a festival village that spreads across the waterfront park like a travelling fair; the tent flaps are left open to spectacular views of False Creek and the Coast Mountains.

As Gaze sees it, the tents are a big part of what has made Bard a success. Indeed, the company stands in stark contrast to the venerable but debt-plagued Vancouver Playhouse, which was forced to close its doors last year. Gaze says Bard has made the city's major distractions – its glorious scenery and balmy weather – work to its advantage.

"On a lovely evening, people would sooner have a barbecue, or go for a run, or go sailing, than be in a theatre," says the British-born actor and director, who trained at the Bristol Old Vic. "If you come to Bard, you can have a picnic, have a glass of wine; if you want to, you can wear your shorts. It's a quintessential Vancouver experience."

"It's such a thing here," says Kim Collier, who is staging a modern-dress, multimedia Hamlet at this year's festival. The show is part of a season that also includes Twelfth Night, Measure For Measure and Timothy Findley's Shakespeare-themed drama Elizabeth Rex. Although Collier, a Siminovitch Prize-winning director, is known nationally for her experimental creations with Electric Company Theatre, in Vancouver it's working at Bard on the Beach that impresses the average citizen. "You say you're directing a show there and people will go, 'Oh, wow!' For the general public, it has such a prominent place in their consciousness."

Its popularity is reflected in its steady growth. That initial production of Dream, mounted on a budget of $35,000, drew 6,000 people. Today, Bard on the Beach is a $4-million operation, which last year attracted 86,000 patrons.

Gaze says he took his inspiration from Ontario's Stratford Shakespeare Festival, which was also born in a tent. When he arrived in Canada 38 years ago, his mentor was the late actor Douglas Campbell, a member of the original Stratford company, who lent his talent and expertise to Bard on the Beach in his golden years. "He believed that the Stratford adventure could be repeated elsewhere in Canada," Gaze says.

Today, it's Gaze who is often mentoring fresh talent. He's encouraged emerging directors like Meg Roe, who oversaw last year's hit production of The Taming of the Shrew. And he's taken risks with visionaries like Collier, whose previous Bard show was an unflinching take on the gore-strewn Titus Andronicus, dubbed by one critic "Blood on the Beach."

Gaze has no desire to go the Stratford route and build bricks-and-mortar theatres. For him, the magic is in the open-air setting – even if performing in a public park can have its nuisances, from people playing with dogs outside the tent to passing party boats blaring pop tunes. There are always those sublime moments that compensate, when Mother Nature suddenly decides to play director. Like the time Gaze, performing the role of Adam in As You Like It, spoke the line "He that doth the ravens feed, yea, providently caters for the sparrow," only to have a sparrow, as if on cue, fly into the tent and alight at his feet. "There was this huge gasp from the audience," he recalls. "That was lovely."

Gaze admits that Bard on the Beach has endured some growing pains in recent years. Its 2011 move from its former 520-seat mainstage tent to a bigger and costlier one has strained its financial resources. "It costs so much more to put that up, and to store and clean it," he says. "But we have the capacity now to entertain a lot more people. And when they start to come, our audience numbers could sail over 100,000. We have a lot of potential to do very, very well."

Catch the Bard across the country

Freewill Shakespeare Festival – Edmonton (June 25 to July 21) The Free Will Players, who have been bringing "free Will" to Edmonton's river valley since 1989, will be offering A Midsummer Night's Dream and King Lear in repertory this summer. Performances are in the tent-covered Heritage Amphitheatre in Hawrelak Park.

Freewill Shakespeare Festival – Edmonton (June 25 to July 21) The Free Will Players, who have been bringing "free Will" to Edmonton's river valley since 1989, will be offering A Midsummer Night's Dream and King Lear in repertory this summer. Performances are in the tent-covered Heritage Amphitheatre in Hawrelak Park.

Shakespeare in the Park – Calgary (June 26 to Aug. 10) Founded by Mount Royal University in 1988, the company is now a collaborative effort with Theatre Calgary and features student actors guided by seasoned professionals. This year, Joseph Ziegler of Toronto's acclaimed Soulpepper Theatre will direct that teen-angst classic, Romeo and Juliet, in Prince's Island Park.

Shakespeare on the Saskatchewan – Saskatoon (July 10 to Aug. 25) Saskatoon's South Saskatchewan River is the backdrop for this tent-dwelling festival, started in 1985. This year The Comedy of Errors plays in rep with Macbeth.

Shakespeare in the Ruins – Winnipeg (June 6 to 29) The company, celebrating its 20th anniversary, performs promenade-style theatre amid the remains of a Trappist monastery – now a provincial park – in Winnipeg's St. Norbert neighbourhood. On this year: an update of Julius Caesar set during the FLQ Crisis in 1970.

Shakespeare in High Park – Toronto (July 2 to Sept. 1) Produced by Canadian Stage since 1983, the granddaddy of Canada's outdoor Shakespeare productions expands to a two-play repertoire this summer with Macbeth and The Taming of the Shrew.

Repercussion Theatre – Montreal (July 7 to Aug. 4) Montreal's strolling band of Shakespeare players celebrates 25 years of touring the city's parks with an English-language production of A Midsummer Night's Dream. For a schedule of this year's venues, go to: www.repercussiontheatre.com .

Shakespeare by the Sea – Halifax (June 30 to Sept. 1) The Halifax troupe, founded in 1994, gets Grimm this summer with a musical adaptation of Snow White. It joins productions of Hamlet and Much Ado About Nothing in Point Pleasant Park.

Shakespeare by the Sea Festival – St. John's (June 22-Aug. 17) For its 21st season, Newfoundland's multivenue fest is presenting the rarely seen Cymbeline at Signal Hill, along with Julius Caesar in Victoria Park and Shake It Up! – 10-minute versions of popular Shakespeare tragedies – at the St. John's Farmers' Market.

Stratford's Cymbeline: Like Game of Thrones, but slower
June 1, 2012 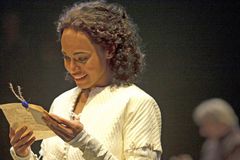 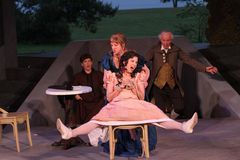 Now showing at Stratford: falling numbers and a bit of stage fright
March 9, 2013 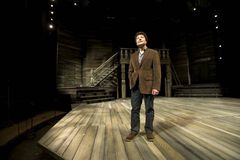