Jesse Eisenberg sits on a hotel sofa in Toronto, leaning in. He listens to questions. He makes eye contact. He delivers complete answers. But for 15 minutes, his hands never stop moving, as he restlessly cuts a deck of cards. Over and over the cards fold in on themselves, cut, straighten, cut, straighten, cut.

It becomes clear that Eisenberg, 29, is nervous, perhaps perpetually so, and that the constant small movement gives him some comfort. After all, he spent a full five months clutching a deck, learning card tricks for his new film, Now You See Me. He plays J. Daniel Atlas, a magician who confidently believes he's the best in the world, and who carries out heists in arenas full of adoring fans. The film opened at No. 2 in terms of box-office sales last weekend, just behind the car chases of Fast & Furious 6 and ahead of the apocalypse in After Earth. But Eisenberg was still keeping his cards close.

"Somebody just gave me this deck," he says, holding it out. It's a promotional deck, with the Now You See Me poster on it. "It's a promotional deck, with the movie on it," he explains unnecessarily. This is not the last time Eisenberg will state something that seems obvious. He's admitted to having obsessive-compulsive disorder, and one of his symptoms seems to be that if he starts a thought, he has to finish it. His voice is deep, his delivery clipped, and in the small pauses while he reaches for the right word, he purses his lips and makes a small "Mmm" sound. Those tics, however, are barely noticeable. Mostly he seems sweet, incapable of dissembling, no matter what interviewer Romina Puga says. (She called Eisenberg "mean" after their encounter, the video of which has gone viral.

She seems like a featherweight to me; I'm on his side.) So, for example, when he tells me that the movie's many magic consultants taught him the mechanics of some famous illusions, I ask if they swore him to secrecy.

"They tried, but I'm not good with secrets, so maybe I will reveal some," he answers. "They have no way of checking up on me." I chuckle. Then I see he's not kidding.

It wouldn't really matter if he did tell, Eisenberg continues: The main thing he learned about magic is that knowing how something is done is almost irrelevant, only about 2 per cent of a trick. Ninety-eight per cent is practising it.

"In retrospect, that seems something that should be obvious to an actor," he says. "I took acting classes, I read all the acting books by all the great teachers, and they were almost not at all helpful when it comes to actually doing it. There's nothing to prepare you for acting but acting."

Acting was also Eisenberg's salvation. Before his empathic family enrolled him in acting lessons – his father teaches sociology, his mother was a birthday party clown and his sister is the actress Hallie Kate Eisenberg – he was perpetually anxious, and struggled through elementary school, crying every day and missing a year. Performing roles provided him with prescribed sets of behaviours that helped him order what he's called his "erratic inner life." He began appearing in children's theatre at 10, landed a TV series (soon cancelled) in high school and made his first film, 2002's Roger Dodger, at 18, playing nephew to Campbell Scott.

Scott taught him another valuable lesson: "Likeability" in a character is overrated. "Campbell's character was kind of despicable, a chauvinist, an awful family member," Eisenberg says. "But what he was doing was so much more fascinating than in 99 per cent of movies, where the main character is universally acceptable and sweet. When we were filming the second-to-last scene, Campbell had a line that revealed that Roger was ultimately a good person.

But he refused to say it. And the character is so much more interesting for it, because it was authentic."

Similarly, Eisenberg's characters – in films including Adventureland, Zombieland, To Rome with Love (in which he played a dithering young lover of the type that his director, Woody Allen, once played) and The Social Network (for which he received a best-actor Oscar nomination) – are often awkward or arrogant, but they feel uncompromisingly real.

So does this: "I get sent the worst possible movies," Eisenberg says. "You can tell on Page 1, when it says, 'Jessica walks out, she's got legs up to her ears.' You just put that down. Use it for firewood or something. The cream of the crop are the ones that come out, and a lot of them are bad, too."

His solution is to write his own plays to appear in, including Asuncion, which ran off-Broadway in 2011, and The Revisionist, in which he co-starred with Vanessa Redgrave, which finished a five-month run in April. Over the course of doing the latter night after night, he could feel himself getting better as an actor. But he'd never be so "presumptuous" as to call himself good. "I have brief moments of feeling connected to a role in a certain way, where you feel like, 'What I'm doing is really interesting to me,'" he says. "But it's a weird and fickle industry."

As well, Eisenberg tends to take on the characteristics of whomever he's playing. For upcoming thriller The Double, he plays doppelgangers: One is a meek businessman, "who feels like he's imposing on the world just by breathing the same air as everyone else." The other is "a brash, confident guy who takes and takes," Eisenberg says. "And when I was playing the first character, I would feel bad about what I had done as an actor that day. When I was playing the other, I felt like what I was doing was great and I didn't want to do a second take because I thought the first take was perfect."

His character in Now You See Me was a bit of a relief, because he's not tortured. "He actually thinks he's the best," Eisenberg says, shaking his head. "In acting, I meet people like that all the time, and it's kind of shocking for me." The most he hopes for is to "trick himself" into believing it long enough to get a job done.

"Literally, before each of the 85 performances we did of The Revisionist, I thought, 'This is the night where it's going to go terribly wrong and I'm going to be revealed to be a fraud,'" Eisenberg admits. "And then it would go okay. Barbara Walters and I were both on David Letterman's show last week, and when he asked her, 'How do you have the guts to interview world leaders and ask them if they've murdered people?' she answered, 'I don't know where it comes from.' I kind of feel the same way. I don't know where it comes from, because in my personal life I feel ill at ease all the time, but then I'm able to perform. I guess it's like, sometimes the thing you deny yourself in your personal life, you allow yourself to manifest in another way." It's Eisenberg's trick, and it's a great one.

A pair of film hopefuls heads off the grid in search of fresh thoughts
May 31, 2013 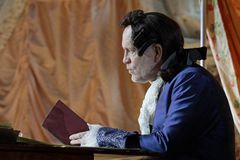 Winona Ryder and Michael Shannon don’t need your advice
May 17, 2013 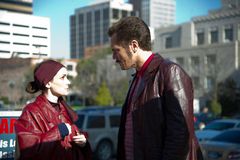