People have long been telling Mary Pratt who she is, and who she should be. She has been labelled as a mere housewife, as an overly commercial artist, as the less-talented (read: female) counterpoint to her once-husband, the painter Christopher Pratt.

In fact, when the two were studying together at New Brunswick's Mount Allison University in the late 1950s, her professor, artist Lawren P. Harris, put it this way: "You know that if two artists are married, only one is going to be successful. And in your family, it's going to be Christopher. So why don't you just understand that and look after the house and the children?"

She did look after the children, all four of them, as well as the house, but Pratt didn't stop painting. A voracious reader, she once read a book where a woman commits suicide because she realizes she can't be a respected writer in a man's world. "I said to myself, that is not going to happen to me," says the 78-year-old painter.

In a stunning retrospective simply titled Mary Pratt, which recently opened in The Rooms Provincial Art Gallery in St. John's, the artist's gorgeous, brutal vision of the world is the best revenge against anyone who ever sought to define her.

After they graduated, the couple moved to Christopher's family cabin in Salmonier, Nfld. He painted full-time and she, the homemaker, eked time from busy days to paint images she encountered in her daily routine: fish fillets on plastic wrap, jam jars on the counter, meat hanging in a garage.

For those who have seen the inner fire of a jelly jar, or lifted the wet, dense gravity of a freezer bag full of filleted salmon – those who understand the effort required to produce those seemingly quotidian objects – Pratt's paintings make those artifacts seem significant, important, luminous.

In the context of society's current food obsession, her work is startlingly contemporary. Her glossy, supernatural canvases, dripping with yolk and blood and the messy minutiae of a life spent in the kitchen, belie a disturbing awareness. The salmon fillets, prostrate on the counter, are mutilated in their separation from the carcass, while a Pyrex bowl boils angrily on a blue-hot flame.

That posed a startling contrast to her husband's career. His deep, saturated, realist images of the Canadian landscape, mostly boats and buildings, quickly rocketed him to international fame.

From the burnt drippings of an overcooked roast to the bloody juices of a pomegranate sprayed across a countertop, which she painted after her divorce, Mary Pratt's work is overtly female. She works primarily from photographic slides projected onto canvas, a technique Christopher initially suggested to her in 1969, when she complained about losing her light.

Perhaps it was due to this explicit sensuality, or because she was painting still-lifes at a time when New York abstractionists like Mark Rothko dominated the fine-art scene, but "commercial" stigma dogs her to this day; both the National Gallery of Canada and the Art Gallery of Ontario turned down this current retrospective.

"I guess they don't like the work," says Pratt. "I feel terrible about that. Because Christopher's work always goes to those places and I just can't get in. I obviously haven't shown them what it's about."

But what turned off the tastemakers these core elements of Pratt's paintings make for her fiercest fans. Of the 75 pieces in this retrospective, half are from private collections and had to be wrested from their owners by a tenacious team of curators. In their beauty, there is an intentional darkness, a sense something is deeply wrong, powered by Pratt's subversive vision that a well-lived life is defined by its cracks, tears and wounds.

"People will find out that in each one of the paintings there is something that ought to disturb them, something upsetting. That is why I painted them." 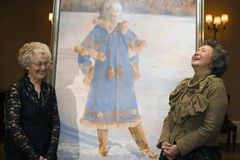 The Rock rumbles over a $47-million 'Newfie joke'
August 7, 2001
Follow us on Twitter @globeandmail Opens in a new window
Report an error Editorial code of conduct
Due to technical reasons, we have temporarily removed commenting from our articles. We hope to have this fixed soon. Thank you for your patience. If you are looking to give feedback on our new site, please send it along to feedback@globeandmail.com. If you want to write a letter to the editor, please forward to letters@globeandmail.com.
Comments