In Waiting for Godot, Samuel Beckett summed up the absurdity of life in one of his most quotably bleak metaphors: "They give birth astride of a grave, the light gleams an instant, and then it's night once more."

The character who speaks this famous line is Pozzo, a brutish landowner who travels the countryside with a slave named Lucky attached to the end of a long rope. He interrupts the play's two tramps – Vladimir and Estragon – as they wait for Godot to show up, once in act one, and again in act two.

In director Jennifer Tarver's exquisitely intelligent production in Stratford, Tony winner Brian Dennehy plays Pozzo – and he draws full attention to the line in question, stopping, removing his glasses, and bellowing it at the audience at full force. It is an example of more being less; what registers most is volume, not meaning.

Thankfully, set designer Teresa Przybylski saves the image of the gravedigger putting on the forceps – indeed, her set is one big physical incarnation of it.

Waiting for Godot is playing in Stratford's Tom Patterson, a theatre where the stage is a long, thin catwalk sandwiched between two bleachers full of spectators. Atop this, Przybylski has constructed an even thinner, elevated platform – a long, waving band of white, surrounded by the blackest black, that leads from one end of the catwalk to the other. It is many things at once: the country road described in the script, the rope that ties Lucky to Pozzo, but most of all it is the gleam of the light, the brief flicker of life that Beckett described.

To be fair to Dennehy, it took his blustery delivery for me to finally wake up and see this image hiding in plain sight – and, an instant later, the set flipped from horizontal to vertical in my mind as if it had rotated 90 degrees on hydraulics.

Suddenly, it was so very clear that Tom Rooney's Vladimir and Stephen Ouimette's Estragon were suspended between life and death. On one side of the stage, the faces of audience members became the ghosts in the grave below them (I was one of them). On the other, the opening night audience became the preborn and the not-yet-conceived above – the denizens of that prelife place that is even more inconceivable than the afterlife one.

Przybylski's set is pure genius, second only this summer perhaps to the extravagant one she designed at the Shaw Festival for Peter Hinton's production of Lady Windermere's Fan. What a star.

There's more to this Waiting for Godot than the design, naturally, but it is the most noticeably original part of the production – with a white celestial body that spins above the stage and a shiny metallic tree. That's not to say the rest of the production isn't strong, but Samuel Beckett's scripts can seem more like musical scores than drama. You can play them with slightly different dynamics, but it's still the same familiar song.

No doubt, Tarver's two leads are wonderful. Rooney plays Vladimir as the optimist (some might say deluded), while Ouimette plays Estragon as the pessimist (some might say realist). Their differences are emphasized by their costumes: Rooney, with a hoodie poking out from under a too-tight (and too-clean?) blazer, comes across a kind of hipster professor, while Ouimette, in a parka covered in unidentified stains, is a more hopeless and homeless hobo.

Godot is not Beckett's best play, but it is his most famous and probably his most entertaining. The degree to which the vaudevillian schtick – from falling pants to fart jokes – Vladimir and Estragon engage in to pass the time continues to amuse, in a time when vaudeville is long dead, is always a pleasant surprise. It is not what you'd call succinct, however. And Beckett's poetry is best treated with a light touch; Dennehy's performance as Pozzo – fierce, howling, beast-like – demonstrates how the words collapse if you hit them too hard.

Rooney, on the other hand, a master of understatement, fares wonderfully. He often seems to throw away a line, but it will then skip and skip and skip in your mind. His interactions with the sad-eyed, vulnerable Ouimette – who first played Estragon in this same theatre in 1996 and 1998 in a legendary production directed by Brian Bedford – alternate between hilarious and touching.

Randy Hughson's performance as the downtrodden Lucky is one of his best to date – painful to watch in its physicality, and chilling in the character's one extraordinary nonsense speech.

Waiting for Godot, which premiered (in French) in 1953, was Beckett's first performed play. As his career continued, the Irish-born playwright's work became shorter and shorter until, in 1969, he even eliminated actors for the 25-second-long Breath, which consisted of a birth-cry, the sound of a breath, then a second cry.

I'm tempted to say that Przybylski does him one better in distilling his worldview down into a single set. Stratford's Waiting for Godot gives us Beckett long and Beckett short in one serving. 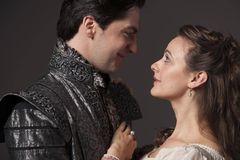 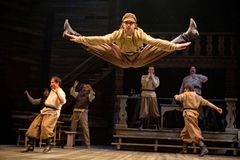 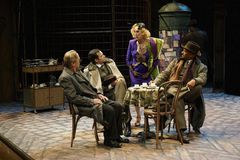 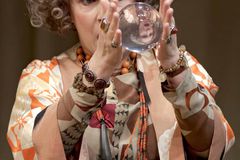 The Three Musketeers: One for all, and all for ‘original practices’?
June 6, 2013 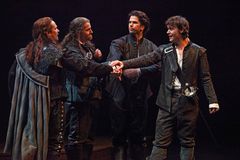