Of Ireland did I come, three score years ago and more. Alone, a little lost and bewildered, but happy to be away, and here.

Not soon but eventually the longings set in – the need for a taste of home on a weekend. Not the Guinness or the salt air in the mornings. It was the chat, the to-and-fro of banter about events on the playing fields of Dublin, Manchester, Liverpool, Lisbon and Seville. The deeds of men from Benfica, Barcelona, Arsenal and Bayern Munich. Goals scored, penalties missed, champions dethroned and glory achieved.

One day in those early years, I went to get a haircut in Toronto from an Italian barber near where I was living for a while. While sitting in the barber's chair, I saw a photo of the Juventus team taped to the wall. Within minutes I was enjoying a long, meandering, much-needed conversation. I started talking to the barber about Italian teams I'd seen play on TV in Dublin. I mentioned Liam Brady, who had left Ireland and then England to play for Juventus in Italy. The barber stood back, said, "Ah, Brady!" and blew a kiss into the air. It took him ten minutes to cut my hair; it was an hour before I left the barber shop.

As far I knew then, soccer was like a secret thing. Elderly Italian or Portuguese men sat in smoky bars and social clubs and waited for news of games played far away. Occasionally there was a story in the newspaper about a shock result in Italy or a riot at a game in England. People tut-tutted about that. As if they had a clue.

Years later I would see a photograph in a book about Toronto's Kensington Market that made my head spin. The photo, from the late 1960s or early 1970s, shows a group of men on the street. They are agitated, you can tell. And only if you know the context can you understand why. The Portuguese Book Store, then in Kensington, sold newspapers and magazines from Portugal. It also had a shortwave radio that, on Sundays, was tuned to soccer games from Europe. People came and listened, intently, hungrily. Then the store attached speakers to the radio and put them on the street.

You can see how it mattered. Men in their Sunday suits pace the sidewalk and listen. The magic of it – news from home, news of Benfica, Sporting Lisbon, Porto and Vitória de Guimarães. What Sunday heaven it must have been to hear it, to savour the camaraderie of talk about the teams, the victories and defeats. It must have been like getting a love letter from home, far, far away. I understand everything about it.

Eventually, television changed everything, and for the better. At first, it was soccer from Italy aimed at Italians, or from Germany aimed at Germans. Then in the 1990s, suddenly, soccer from all over the world was all over the TV channels. To some, like me, or those men who had paced the sidewalk in Kensington Market, it was a relief, a gift. To others it was exotic, mesmerizing and novel.

Thanks mainly to television, soccer is no longer clandestine in Canada. It was television that made it possible for the Toronto FC, Vancouver Whitecaps and Montreal Impact of the Major Soccer League to exist. Television first answered a need to deliver the game to its natural audience of immigrants and then created an audience for more of it. This is one of the benign aspects of the medium – the inclusivity of its reach, enabling the embrace of the novel by merely delivering it.

Some say that soccer is a religion, and there's truth in that. Club soccer is literally a sort of civil religion and all soccer imitates the models of institutional faiths. The most successful clubs in Europe and South America exist and profit from a devotional communication model that promotes the idea of supporters as "the faithful," and they establish shrines to the team's greatest players as if they are saints. And, like all religions, soccer clubs provide a bottomless reservoir of hope – and even the odd miracle – for their devotees.

But what is remarkable about the World Cup, Euro and other major tournaments of international soccer is that the appeal transcends traditional religious and national barriers. Few events or emanations of contemporary culture are instantly understood and appreciated in every area of the world, no matter what the dominant faith might be. Soccer is one. In the post-9/11 world, shared, intense interest in soccer is one of the very few things that transcend suspicion and hostility between countries and cultures. And television is responsible for that.

On Friday, Euro 2012 opens in Poland and Ukraine. Poland plays Greece at noon. You know how it will go. In cities, entire neighbourhoods will be empty for hours. Packed bars and restaurants will throb with the intensity of the passion inside as all eyes are glued to the TV set, to the only games that matter for the next month. All Euro 2012 games are on TSN and TSN 2. Most games are on TLN.

Off to Poland and Ukraine I go. I won't be watching it on TV. I'm there. Please follow me to the Sports section for the next few weeks. 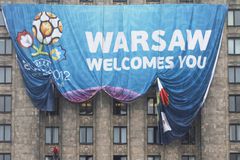 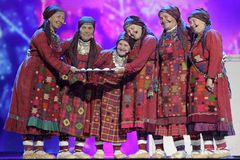