Back in 1976, when Aaron Sorkin was still an impressionable lad in his mid-teens, two equally important movies examined the world of journalism in two very different ways. Network satirically savaged television news as nothing more than a fat ratings whore. By contrast, All the President's Men idealized print news as a virtuous crusader for justice. The latter proved influential, inspiring a generation of wannabe Woodwards. But the former proved prophetic – if pandering, bean-counting populism is a disease, it's now rampant in every corner of the mass media.

All these years later, the boy Sorkin has grown into a man of some writerly importance and, armed with that clout, he seems intent on revisiting those iconic films to single-handedly reverse the current – that is, to undo the prophetic whoring and to resurrect the lost idealism. His crucible is The Newsroom, debuting Sunday on HBO. Having watched the first four episodes, which clock in at well over four hours, I can assure you of this: The first four minutes are infinitely better than anything that follows.

There, in an onstage debate at Northwestern University, Will McAvoy (Jeff Daniels) looks bored but innocuous, and fully deserving of his banal reputation as "the Jay Leno of cable news anchors." But then, like Peter Finch in Network (or Clark Kent in Superman), something snaps and, from beneath his bland persona, the real Will McAvoy stands up. Oh, he's fiercely intelligent, astutely witty, and capable of marshalling an argument to prove this most heretical of heresies: "The first step to solving a problem is to recognize it: America isn't the greatest country in the world any more."

Yes, that first step is superb, but not the many steps to come. Problem is, in the precredit sequence alone, McAvoy embodies the entire theme: Stop dumbing down and release your inner smarts; start speaking truth-to-evil populism and "reclaim journalism as a great profession." Sorry, that's an actual quote, spouted by the new executive producer (a miscast Emily Mortimer) who teams with Will to deliver the new and improved news. Why? Easy, and sorry again: "There's nothing more important to a democracy than an informed electorate."

Sorkin has a gift for quick dialogue but, even at his best, his characters often sound too eloquent and arch for their roles; in fact, they can all start to sound like a suspiciously articulate pack of Aaron Sorkins. Here, far from his best, he trades in speech for speechifying, and, to amplify the pulpit, gives himself an officeful of mouthpieces. From curmudgeonly Will the registered Republican right down to Maggie the fresh-faced rookie, every damn one of them comes off like a certain Hollywood liberal – often when they talk, always when they orate. And they orate a lot.

More refreshingly, what they orate about is quite timely. The opening quartet of shows spans a specific period from April, 2010 to January, 2011, with each episode revolving around a particular news event – the Gulf of Mexico oil spill, the midterm elections, the Gabby Giffords shooting. Add in recurring clips of figures like Sarah Palin, Michele Bachmann, Obama himself, and the text has a palpable immediacy rare on TV or in film.

But if the setting feels au courant, the rest is pure 1976. The series is schizoid: Although the actual issues enjoy an engaging relevance, everything else seems weirdly anachronistic. For example, the awkwardly staged romances – Will has a history with his producer Mackenzie; Maggie is the object of a crush – would look right at home on a Lou Grant rerun. In that sense, beyond the occasional f-bomb, the creative license of HBO is wasted on Sorkin. In matters of the heart and below, he's really just a network guy, the Jay Leno of showrunners.

More damning still, and even more anachronistic, is the central debate itself – the incessant yammering about elite intelligence versus crude populism, bread versus circuses. In the current climate, that debate is old. Worse, at least in the mass media, it's been lost, and no amount of hectoring from Sorkin is going to alter the verdict. Instead, in any conventional newsroom today, broadcast or print, the dominant conversation has taken a distinctly existential turn. There, the industry isn't debating quality but something rather more personal – its very survival.

But not in The Newsroom, where Mackenzie, in another cliché perfectly in keeping with the lost debate, insists, "Who says you can't be good and popular?" To that heavenly end, the ongoing drama pits the divine guardians of a great profession against Beelzebub the corporate bottom-liner. Dwelling in the heat of the executive floor, she's none other than Jane Fonda who, upon getting blasted by another stream of Sorkinesque rhetoric, counters with a curt: "Careful with the lectures."

Careful indeed, Aaron, because, four chapters into this bible, all you've inspired is sympathy for the devil. 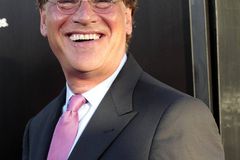 Can Aaron Sorkin make journalists into heroes once again?
June 20, 2012 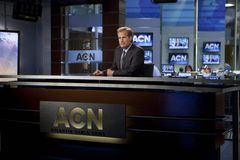