No one would have picked Jimmy Kimmel to be the most dangerous, angry comedian in the United States. But he's become precisely that.

Night after night, Jimmy Kimmel Live (ABC, weekdays at 11:35 p.m.) has become essential, galvanizing viewing. Not because of his interviews with actors or his surreally funny mockery of The Bachelor and Bachelorette franchises, but because he's in a personal war with a group of American politicians over health care. He's fiercely, authentically angry and he won't give an inch.

What Kimmel has become is the most bizarre but illustrative emanation of the Trump era. That's because he doesn't want to engage, but he has to do it. The power of his rage is not anchored in his sincerity but in his reluctance to even attract the attention of politicians and right-wing pundits.

What he's doing might well be the most dangerous and, ultimately, the most damaging assault on the Trump administration. See, this isn't Kimmel's arena. He has a huge audience, on TV and online, and part of that audience is there because he's not Stephen Colbert, Seth Meyers, Trevor Noah or John Oliver. Kimmel is usually closer to Jimmy Fallon in style and method. He sticks mostly to showbiz and pop-culture snark in his material.

While Trump has been a boon to some late-night hosts and their shows, there is a vast audience that wants a Trump-free zone late at night on TV. As funny as Colbert can be on occasion and as baroque in language and rage as Samantha Bee's rants are, those TV stars are preaching to the converted. Kimmel's audience tends to be non-aligned, happy to be imperturbable about political issues and battles. When Kimmel tells that audience about hypocrisy, bullying and lies, he's telling people who are more likely to be influenced.

Even worse for those who fear Kimmel's wrath, his indignation is about something everybody understands – family. Kimmel's young son, born earlier this year with a heart defect, exists as the very definition of "pre-existing condition" that would disqualify him from medical-insurance coverage. All Kimmel is asking for is a health-care bill that would not make patients like his son ineligible for coverage or make coverage so expensive it would be impossible.

Senator Bill Cassidy, an advocate for health-care reform, appeared on Jimmy Kimmel Live not long ago to assure the host and viewers that any reform he championed would pass "the Jimmy Kimmel test."

But the new Graham-Cassidy health-care bill currently under consideration in the U.S. Senate would do nothing of the sort, and would put health care beyond the reach of tens of millions of Americans. That's why Kimmel's fury is so focused – it's about lies and hypocrisy. And Kimmel sees through every obfuscation used to dress up the new reform as benign.

"Listen, health care is complicated," he said the other night. "It's boring. I don't want to talk about it. The details are confusing, and that's what these guys are relying on. They're counting on you to be so overwhelmed with all the information that you just trust them to take care of it. Well, they're not taking care of you. They're taking care of the people who give them money."

Further, Kimmel has turned his rage not just on proponents of the new health-care reform, but on Donald Trump. He understands that Trump's obsession with overturning so-called Obamacare is about erasing anything that has the Obama name on it. When Trump tweeted his support for the Graham-Cassidy bill, Kimmel went for the jugular.

The backlash against Kimmel has come from the usual sources – Fox News pundits and Republican politicians. They use the knee-jerk response that Kimmel is an unrepresentative voice, being part of a "Hollywood elite," and is unqualified to talk about health care.

Kimmel isn't bothered. In fact he has contempt. "I see these comments from these angry people, that say, 'What qualifies you to talk about this stuff, you're a comedian – go back to being not funny.' And I feel like it's my duty to remind these people who are so concerned about my qualifications – the guy you voted for President, what was his job qualification? It was this – he fired Meat Loaf. And you put him in the White House."

That's the upshot – in a United States where Donald Trump can be elected President, Jimmy Kimmel can be the most angry, dangerous comedian of them all. 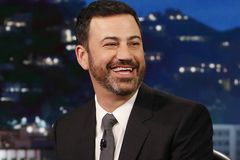 Republicans plan health-care vote for next week, Obama and Kimmel denounce bill
September 20, 2017
Jimmy Kimmel to return as host for 90th Oscars
May 16, 2017
Follow John Doyle on Twitter @MisterJohnDoyle
Report an error Editorial code of conduct
Due to technical reasons, we have temporarily removed commenting from our articles. We hope to have this fixed soon. Thank you for your patience. If you are looking to give feedback on our new site, please send it along to feedback@globeandmail.com. If you want to write a letter to the editor, please forward to letters@globeandmail.com.
Comments