The CBC is up to something, but I'm not sure what.

It went on for hours and, when I departed, I still wasn't sure exactly what CBC has in store for Canada in the upcoming TV season. Apart from the Winter Olympics in Sochi, Hockey Night in Canada and the return of Battle of the Blades. Which everybody knew about, anyway.

We all gathered in a studio that had giant screens on three walls. People stood around and talked about Mayor Rob Ford, like you do every day now in this neck of the woods. First up was what's called "a sizzle reel" of CBC shows. Dragons' Den, Rick Mercer Report, Heartland, that kind of thing. Sizzle? Oh please.

Along came the interim chap in charge, now that Kirstine Stewart has, as they say in L.A., "ankled" CBC. She left, you know. And one could tell. This was one dull CBC event. There is more excitement in the air at my local bar when it's time for the $5 pint special. Anyway, interim boss Neil McEneaney said he couldn't be more proud. "We are connected to Canadians," he said. Pastor Mansbridge spoke and must have said something very forgettable, because I've certainly forgotten.

Another "sizzle reel" was shown. Really nice footage of Chris Hadfield in space. Rick Mercer talking about Canadians being self-deprecating. The Dragons' Den people talking about how great they are. Mansbridge again, saying. "We live in such a great country." Which is also utterly forgettable but, luckily, I wrote it down. The emphasis, such as it was, landed on the Sochi Games, Hockey Night in Canada and Battle of the Blades. Skating, skiing, Canada. The appropriate response was, "Well, there you go, eh?"

Then there was a tour of the "Canada Lives Here Experience," which involved walking through a maze, looking at video screens and seeing a giant map of Canada that also allowed people to hear CBC Radio from across the country. Lots of photos and stuff. A very peculiar experience, though. The end point was a display about the Sochi Games which is, obviously, the only thing that people need to know about CBC TV for the 2013-14 season. And Battle of the Blades, of course.

Here's the weird thing – CBC has some new dramas coming. A cop show called Crossing Lines about "a police unit that specializes in cross-border crimes," which stars Donald Sutherland and William Fichtner. Also an adaptation of the Terry Fallis novel The Best Laid Plans, "a humorous and satirical journey into the world of national politics and backroom manoeuvring of Canadian government." Who stars in the adaptation is unknown to me.

The news about these new series and a reality show called Four Rooms, about art buyers, apparently, ("Antiques Roadshow meets Dragons' Den!") existed like a rumour at the CBC event. There was no push behind them, no dazzle, no sizzle. Unless one read the details in the press kit handed out to the media, you'd be unaware of them.

What matters, clearly, is Sochi, Hockey Night in Canada and Battle of the Blades. Of course there are returning shows – including Arctic Air, Murdoch Mysteries, Republic of Doyle, Mr. D, Dragons' Den and Heartland. The drama Cracked, launched earlier this year, also returns, but with a new co-star to join David Sutcliffe. But for an outfit that boasts "Canada Lives Here," CBC seems curiously lacking in enthusiasm for anything that isn't a winter sport.

Maybe CBC is up to something. Maybe CBC is on to something when it enthuses only about a tiny handful of TV events. I'm not sure. After several hours at CBC's 2013-14 season preview event I'm pretty sure that the Sochi Winter Olympics will be on CBC, and that's all I'm sure about.

Rookie Blue (Global, ABC, 10 p.m.) is back. Here's what happens, it seems – "Nick and Andy go missing while working undercover to infiltrate a meth pipeline; Swarek and the other officers find themselves in the middle of a rescue operation; Andy works to deal with all the change going on around her." Mention of the "meth pipeline" might make you think the show enters Breaking Bad territory, but don't bet on it.

Does Someone Have to Go? (Fox, Global, 9 p.m.) is a new reality show in which the employees decide who to fire. Just what the world needs right now. 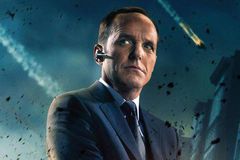 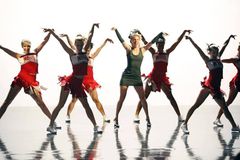 Mel Brooks, lame sitcoms and the superiority of codger humour
May 19, 2013 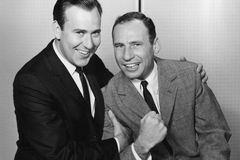 Why the next Canadian TV movie should be called Is Everybody High?
May 22, 2013 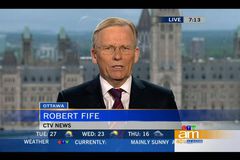