Some war stories need to be retold - over and over again.

And one of them, airing on Masterpiece Classic, is The Diary of Anne Frank (Sunday, PBS at 9 p.m.).

First published in 1947, the memoir of a young Jewish girl who spent two years hiding from the Nazis in a Dutch attic has undergone more than a dozen television adaptations, including versions in Spanish, Japanese and Yugoslavian. At various times, The Diary of Anne Frank has been turned into a Tony- and Pulitzer-winning stage play and an Oscar-winning 1959 feature film.

So why revisit one of the most tragic stories of the Second World War?

"Incredibly, there's a whole generation out there unfamiliar with Anne Frank's story," said Masterpiece executive producer Rebecca Eaton at the TV critics tour. "In fact we discovered there was also a large percentage of younger people who did not know the Holocaust had occurred, or who Adolf Hitler was. We had to make this story for a new generation of viewers."

As a literary property, The Diary of Anne Frank has sold more than 30 million copies and remains required reading for high-school students worldwide. "The book is still on most school bookshelves, but kids are very selective in what they read these days," said Eaton.

Airing on what's called Holocaust Remembrance Day in the United States, the 2009 BBC-PBS co-production adheres strictly to the book and drew rave notices following its recent broadcast in the U.K. - with most of them crediting young British actress Ellie Kendrick ( An Education) in the titular role. "She doesn't just play Anne Frank, she becomes Anne Frank," said The Guardian's TV reviewer.

But this is not your mother's Anne Frank. Unlike the restrained performances of previous actresses in the role, Kendrick's Anne is precisely as she seems in the diary: An impatient and willful 13-year-old with wild dreams of her future, and near-seething disdain for the boring adults around her. "She is immature, and it's fascinating to watch her mature over the two years she spent in hiding," said Kendrick.

The first several minutes of the two-hour film depict Anne's carefree existence before the German invasion of the Netherlands. The remainder takes place entirely in the cramped secret annex above her father Otto Frank's warehouse and office, where Anne, her family and a handful of near-strangers hid from Nazi troops for two years. Anne's only joy during that period became her regular entries in her journal.

"The diary became her portal out of the claustrophobia," said Kendrick. "It was the only way she could escape from all the people around her. It became kind of her only friend. She confides in the diary so wholly and intimately that you're granted this kind of window into a person's soul, really."

The new version also contemporizes the story with a shocking scene wherein Anne discusses the changes in her body during puberty. The passages were removed by her father before the original publication and later restored following his death in 1980.

"She was very sexually curious," said screenwriter Deborah Moggach, who also penned the script for the 2005 film version of Pride and Prejudice. "Like any young woman, she realized changes were happening in her body, and she wanted to know why, which is perfectly normal. If I have any criticism of the early versions, it's that Anne is made too saintly."

And as in the book, there are moments of fleeting youthful hope. Anne and her family are shown in the cramped annex, listening to radio broadcasts with details of the Allies slowly winning the war. Anne is thrilled to learn that firsthand accounts of the Nazi occupation will be highly prized at the war's conclusion, and throws herself fully into writing her diary.

The grand tragedy, of course, is that the Frank family's hiding place was eventually discovered and Anne and her sister Margo were sent to Auschwitz and then to Bergen-Belsen, the concentration camp where they died in 1945.

"Those were such tragic times, and her diary gets in touch with teenagers in a way history books can't," said Kendrick. "It's so rare that we get such an intimate testament of someone who actually went through that terrible ordeal. That's why it's so important that her book continues to be read." 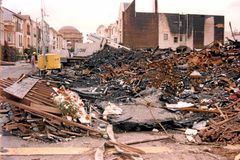