It is this: "A show that has taken the U.K. by storm." And this: "Lauded by critics, discussed over the nation's dinner tables, and tweeted about more than any drama in U.K. history."

It is Broadchurch (Sunday and Monday, Showcase, 10 p.m.) and those praise-filled quotes come from the chap from BBC America who introduced some of the cast to TV critics assembled here for the summer press tour. It is, I can attest, terrific, gripping entertainment, expertly made and, in the early going (there are eight episodes, two shown weekly here), it is powerful and poignant.

In truth, it isn't always groundbreaking. It stays within the traditional framework of a good Brit mystery – a confined setting with a flavoursome, motley crew of residents, cops and suspects, and it presents a few red herrings before fixing on a climactic revelation. The detective at its centre is eccentric, not quite what he seems. Yet the typical outline of Brit mystery is expanded somewhat in Broadchurch, which explains the intense interest and acclaim over there.

The gist: The body of 11-year-old Danny Latimer (Oskar McNamara) is found on a beautiful beach in Dorset, and the boy's death tears apart the small community in the picturesque seaside town of Broadchurch. Suspects abound at first, and there's a cynical national tabloid reporter poking around. The cop in charge, Detective Inspector Alec Hardy (the former Dr. Who, David Tennant, who wasn't here in L.A.) is an outsider, distant, odd and carrying a secret. His associate, local Detective Sergeant Ellie Miller (Olivia Colman from The Iron Lady), has close personal ties to the dead boy's family. That family (Jodie Whittaker is terrific as Beth, the traumatized mom) unravels. The town is in a lynching mood, and there is the stench of something rotten in the place.

Written by Chris Chibnall, the series is obviously influenced by the original Danish version of The Killing, something the cast acknowledged in their meeting with critics. "It's Chris's story, with huge influences from actual events that happened in Britain," Colman said. "But The Killing was an influential piece in that they had 'a dot dot dot' at the end, so it is just suggested that the story was always expanding."

What is particularly powerful in Broadchurch is the raw, piercing portrayal of the emotional devastation that follows the sudden death of a child. Colman was asked if being a mother affected her performance.

"I don't think you need to be a mother to imagine it," she replied. "Everyone has some children in their lives that they are related to; there are friends' children that you love. And this is the worst possible thing you can imagine. So it's very easy to access how awful that is.

"Personally, I've always been a fairly emotional person anyway. Now, with children, I have no armour at all. So there were lots of scenes where it said, 'Ellie doesn't cry,' and I was thinking, 'Good luck with that, because I'm afraid I won't be able to stop.' So I don't think you have to be a parent as an actor to perform that upset. That's what I think. But me, I can't watch those clips where Beth sees her boy on the beach. I can't look at her, you know. You just have to know what love feels like in order to experience that pain, I think."

The extraordinary setting – the beautiful beach and soaring cliffs – is almost another character in Broadchurch. But Colman cautions that any tight community could be the setting for such a powerful story.

"This could be done in a big city, where you have your own little community. It's your neighbours in the apartment block. It's the person in the shop. So if it's a close community where you come from, I don't think it matters if it's set in an urban environment or a beautiful beach setting. But I think that, because it was so beautiful, it just seemed so wrong that something so bleak can happen in a holiday destination place, and it did. The juxtaposition was what [Chibnall] used to really highlight it."

David Bradley, who plays an elderly shopkeeper on Broadchurch and is currently best known for playing the character who oversaw a massacre at a wedding on Game of Thrones, chimed in: "It was just a beautiful location. I think, if I may, this heightened the darkness of the story. It put it into sharp relief. We all stayed there, in the location, for months, and that heightened the sense of tragedy invading it. And as locations go in Britain, it is probably about the most beautiful I've ever worked in."

U.S. TV execs love Broadchurch too, apparently – Fox is already planning an American remake with Chibnall as executive producer. The original series is fine entertainment, with flashes of brilliance, though in the context of the darkest of U.S. cable dramas, it is almost sunny. The Fall, that recent Brit drama starring Gillian Anderson, was more casually bleak. But Broadchurch gripped Britain and will grip a lot of people here. The actors are good and nice people – jolly good show and all of that.

The White Queen: Strong women are in store for fall TV
August 1, 2013 How Under the Dome has ‘changed the face of summer television’
July 31, 2013 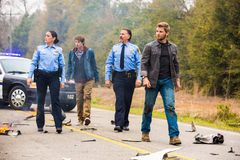 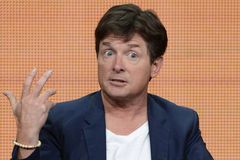