There's a story Paul Barnsley likes to tell about a newsroom, which shall remain nameless, in Southern Ontario. When a reporter was leaving the paper, the story goes, a fist fight broke out over the resulting shift in beats. The loser would have to cover Six Nations Council.

"Most reporters, if they get put on the aboriginal beat, they do their darnedest to get off as quick as they can," says Barnsley, executive producer of investigative news for the Aboriginal Peoples Television Network. "It's easier to cover city hall or to cover a provincial legislature or federal Parliament. It just is."

Barnsley, 54, is responsible for APTN Investigates, the show that broke the Bruce Carson story - a government-connected scandal that has been picked up by every major news outlet in the country, and has received a lot of attention on Parliament Hill.

It's a rare moment in the spotlight for APTN, a network that languishes high up on the dial, and whose newsroom operates on a much smaller scale than its mainstream competitors. "There's a lot of people in this country that don't know we exist," says Barnsley.

Launched in 1999, APTN offers programming about first nations, Inuit and Métis, ranging from cartoons ( Little Bear) to drama series ( Blackstone) to news programming in English, French and several aboriginal languages. Most of the programming originates in Canada, but you'll also find Hollywood films and Northern Exposure reruns - and a lot of infomercials.

With an annual budget of about $37-million (based on 2008 figures) APTN derives the bulk of its revenue from subscriber fees. That year, the federal Canadian Heritage department gave the network $2.1-million; advertising brought in about $2.5-million. APTN's hiring policy favours aboriginal candidates, and more than three-quarters of the staff are native. (Barnsley, incidentally, is not.)

On the news side of the operation, APTN airs APTN National News on weekdays; and on alternating Friday nights, the current-affairs programs APTN In Focus and APTN Investigates. Their mandate: focus on aboriginal issues, and also provide an aboriginal take on other news.

"Please don't take offence," Barnsley said during an interview this week, "but the mainstream media doesn't really spend a lot of time on aboriginal issues in-depth and doesn't necessarily understand them that well."

Since launching in 2000, APTN's news operations have grown substantially, with 11 bureaus now across the country, each staffed, when at full complement, by a cameraperson, a video journalist and a reporter. They cover stories of interest to aboriginal viewers. Among them: funding issues, court proceedings, Assembly of First Nations activities, and protests.

APTN's investigative unit, based in Winnipeg, consists of seven people, plus a half-time Web writer who's shared with the news operation. Right now, due to the Carson story, they're operating with nine people.

For some journalists, APTN is a launching pad into the mainstream media. Others come to APTN from non-native outlets, sometimes because they're dissatisfied with the treatment of aboriginal stories by their networks.

But there can be real frustration breaking intensely human stories - especially when nobody notices.

Karyn Pugliese, 41, was with APTN for six years beginning with its news programming launch, and now hosts the current-affairs show @issue on iChannel. "One of the reasons that I had to leave APTN was that I was getting too emotional. There are certain stories that I have a hard time talking about without starting to cry because you go into communities and you see who are nice people. They have loving families and they're living in conditions that are just intolerable."

Pugliese knew people in those communities often spoke with her - sometimes about a taboo subject, against the wishes of others - in order to effect change. But she also knew her stories wouldn't necessarily accomplish that.

"You sometimes see W5 or CBC break the story and then at the end of the day when they go for their Canadian Association of Journalists awards they can talk about how that made a big difference. You sit there and you watch over the years the amount of stories that APTN has broken, and the really quality work and quality journalism and facts, and follow the money. They put all this research and all this effort into it, but it doesn't have the same impact."

The Carson story has certainly been an exception.

It was a story APTN was planning to reveal on the season finale of APTN Investigates on March 25. But when the PMO called in the RCMP, the Ethics Commissioner and the Lobbying Commissioner, Barnsley knew he had to act immediately. As a result, APTN wound up scooping itself. Two hours after learning the PMO was taking action, the network ran a short item on its national newscast. It posted an online piece that night.

The sensational story has been picked up everywhere. "When you have CBC national, CTV national, The Globe and Mail, The [Toronto]Star, every big paper, every big media organization now saying this story was broken by APTN, all those news consumers out there are going, 'Who?' Now they know who we are," says Barnsley.

"I think this will give them enormous profile as an organization that does serious journalism," says Candis Callison, an assistant professor at the University of British Columbia Graduate School of Journalism.

While there has been great interest in the political scandal in the mainstream media, APTN has continued to follow the issue at the centre of the story: the poor water quality in native communities.

"There are incredibly important stories out there that aren't being told right now, and now we're being given the opportunity to do that," says Barnsley. "And they're the kind of stories that can make life better for an awful lot of people who maybe right now have got some real challenges they're facing.

"The more successful the show is, the better our chances of getting more resources, to do it even better."

This isn't the first story APTN has broken to mainstream - and political - attention, but it's been a real morale booster at company headquarters in Winnipeg and at bureaus across the country.

"This is a story that has affected the government of Canada, the Prime Minister," said Barnsley. "If the government falls … a lot of the pundits are saying that this story will have played a role in that."

N.B. This story has been changed to reflect the following clarification: As of 2010, APTN no longer receives funding from the federal government. 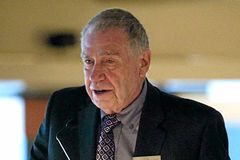 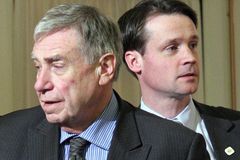 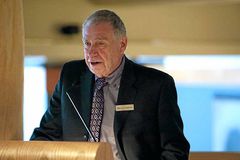