On Monday at 5 p.m., the channels MTV, Comedy Central, CMT and other ViacomCBS-owned platforms in the U.S. went entirely dark for 8 minutes and 46 seconds to honour George Floyd and Black Lives Matter. That was how long Minneapolis police officer Derek Chauvin kept his knee on Floyd’s neck.

Also on Monday, it was reported that an arm of ViacomCBS announced it picked up former Fox News host Bill O’Reilly’s online show for national distribution. The disgraced O’Reilly, who was dismissed by Fox in 2017, after an investigation into sexual-harassment allegations, has become part of the history of the #MeToo movement. His name is indelibly linked with it.

What can’t be ignored is O’Reilly’s history of racist remarks. Mere weeks before he was fired, he jeered at a speech by Maxine Waters, the senior black representative in the U.S. Congress. “I didn’t hear a word she said,” O’Reilly said, smirking on-air, “I was looking at the James Brown wig." Earlier, O’Reilly was briefly notorious for saying black slaves were “well fed and had decent lodgings" while being forced to build the White House. That guy is now on the comeback trail via ViacomCBS.

American TV, especially cable news, is in as much a state of tone-deaf chaos as the country itself. Night after night, coverage of the protests, peaceful or violent, after Floyd’s death, has been woefully inadequate. There is a lust for footage of chaos, burning cars or buildings and a serious absence of analysis and explanation.

On Saturday night, while MSNBC was covering protests and rioting in multiple cities, two talking heads were announced as appearing soon. Both were experts on policing and the handling of mass protest. On the air, one spoke for a few seconds before he was cut off. The anchor wanted to cut away to a reporter on the ground in Washington. There followed a long recitation of facts about what protesters were doing, what the police were doing and speculation about that fire over there being a car in flames or a trash can.

The major American all-news outlets, the lot of them, are essentially unfit to cover this crisis. The engine that drives them is snark, rhetoric, posturing and pompous finger-pointing. When a real civic meltdown happens, their modus operandi is beggared by events. Their first impulse is to glorify themselves as innocent witnesses to rage and chaos. They are not innocent; they are players in the churning chaos of Donald Trump’s presidency and the meltdown itself. Like those police officers who expect impunity, all-news TV expects exoneration from responsibility.

They are all obsessed with each other. At Fox News, anchors refer to the media “mob” of CNN and MSNBC, and occasionally ABC or CBS News. On CNN, media analyst Brian Stelter is obsessed with Sean Hannity at Fox, who has made disparaging remarks about him. At MSNBC, they all take a fanciful high road of liberal calm, while host Chris Hayes seems to think that Tucker Carlson on Fox exists only to be debunked by him.

The arrest last week on live TV of CNN’s Omar Jimenez was a crucial moment in this uprising. On live TV, the suppression of a free press was there for all to see. For the most part, the police in the U.S. loathe the TV media.

Yet the police and media are part of the same United States of the moment, careening from one crisis to another in a welter of righteous rhetoric, finger-pointing and posturing. The police provide no valid excuses for their actions and the media provide no context about how the country got here. It’s like two angry dogs barking at each other pointlessly.

Much quoted in the past few days is Martin Luther King’s statement, “A riot is the language of the unheard.” It should resonate with all-news channels. When are “the unheard” featured on Fox News, CNN or MSNBC? Almost never. Locked into often-hysterical partisan bickering, the channels are completely unused to providing context and reportage beyond punditry on Republican-versus-Democrat altercations.

When is the real life of American cities covered? Where is the punditry and analysis of the vast racial disparity in health and wealth? What this current crisis illuminates is all-news TV’s preference for extolling itself. It’s not the real basis for the protests and riots that matter, it’s the alleged bravery of its peacocking reporters on the inflamed streets. Of course it’s time for the return of Bill O’Reilly’s sexist, racist taunting on TV. Of course it is.

Finally, this column continues with a “stay-at-home-period daily streaming pick.” Today’s pick is Paterno (Crave/HBO). It’s about Joe Paterno (Al Pacino), one of the most successful coaches in U.S. college football history. Specifically, how he handled the unfolding scandal of sexual-abuse claims against a guy in his inner circle, defensive assistant coach Jerry Sandusky, at Penn State. The one-word title is apt. The Sandusky figure is barely in it. This is about Joe Paterno, then 84 years old, much admired – if not worshipped – in college football, and how he reacted.

The movie is about the ugliness of the public response when a hero is revealed as deeply flawed. It’s about how sport is used as an excuse to rationalize what is inexcusable. 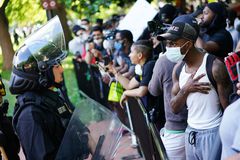