Kudos to Benedict Cumberbatch. He isn’t going in for easy roles or resting on his laurels. In his latest and dazzling outing he’s working with a full-tilt ferocity that is breathtaking and, you suspect, backbreaking for any actor.

Patrick Melrose (starts CraveTV Saturday, 9 p.m., also on the TMN3E channel Saturday, 9 p.m. and TMN1, Sunday, 11 p.m.) is an astoundingly intense five-part miniseries that has Cumberbatch front and centre for almost the entire length of the acid drama that it is. It’s no surprise to learn that this adaptation of Edward St Aubyn’s novels is a proverbial passion project for the actor. He adores the books, wanted to play the title character and compares him to Hamlet in terms of the character’s challenges and complexity.

Right there, mind you, is the possible fault line in this outrageously ambitious series. Patrick Melrose – the man – isn’t actually that complex. He’s a mess, a truly fine mess of scathing anger, guilt, self-doubt and addiction. He’s also extremely rich, and he’s from the sealed world of the English aristocracy. He is a very, very privileged white male with rage issues, and, well, it’s quite possible that viewers who are not stuck on Cumberbatch might find the character gratingly cruel, too privileged to truly care about.

Still, the dazzle is there from the get-go. (Three of the five episodes were sent for review.) When we meet Patrick Melrose, he’s a twentysomething adult with an insatiable appetite for heroin, cocaine, alcohol and anything else that will dull his pain. That pain is a horrific childhood lived in great wealth and comfort. He was abused by his father, a figure played with macabre viciousness by Hugo Weaving. His mother, Eleanor, a rich American (Jennifer Jason Leigh, who is also magnificent) turned a blind eye to the abuse, cocooning herself in liquor and pills. Patrick loathes them all and, eventually, the class from which he and his father emerged.

The series opens with his father’s death and Patrick in New York to see the body and collect the ashes. This he achieves while on a bender of mind-boggling irresponsibility. To watch Cumberbatch inhabit this man consuming drugs, falling apart and consuming more, all the while unleashing a stream of memorable witticisms, is to be truly in awe of an actor. Meanwhile, you might feel sorry for the hotel staff and waiters who bear the brunt of his obnoxious behaviour.

Mainly, to begin, Patrick is doing monologues, and Cumberbatch is finely skilled at making these vocal reveries very theatrical. Junkies tend to make for fairly boring drama, but the actor makes the chaotic, choleric heroin highs of Patrick an event you can’t look away from with a tremendous physical performance. And then there’s the savagery of the asides. “Suffering is what takes place when other people are eating,” he snarls, possibly quoting his horrific father.

That father comes into focus in the second episode, which depicts a portion of Patrick’s youth in splendid isolation in the south of France. Well-off figures from the English landed gentry come and go, bored with everything except their own cruel jibes at each other and those who are rich but not aristocrats. There isn’t a single decent person, and young Patrick (played as a child with great poignancy by Sebastian Maltz) drifts around, simply waiting for the next bout of sadistic abuse from his father.

There is always a sense of the English upper class being satirized with venom, but that spirit of invective only comes to the surface, truly, in the third episode. The central event is a lavish party at a country mansion attended by Princess Margaret (Harriet Walter in a fiendish cameo). At this point, Patrick is trying to stay sober and clean, and he sees those around him with grave disgust. It is also when he makes clear to a friend exactly how his father abused him. The episode is an extraordinary combination of ruthless comedy, tragedy and poignant regret.

What makes Patrick Melrose, the series, one of the year’s outstanding dramas amounts to several factors. Cumberbatch is stunningly good. The series is made with enormous skill (by screenwriter David Nicholls and director Edward Berger) and lavish attention to colour, look and feel. And most important of all, by staying faithful to St Aubyn’s novels, it depicts the English upper class as a ridiculously indulged, corrupt subsect of society, heinous in their inherited privilege.

After multiple seasons of the tosh that is Downton Abbey and two seasons of the glam-triteness of The Crown, Patrick Melrose looks and feels wickedly revolutionary. 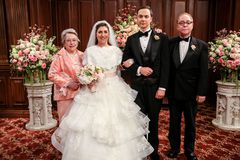 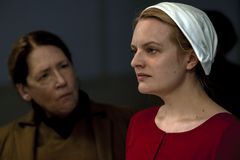 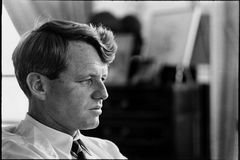