Few dramas have the guts to present a counter-argument against the storyline right at the start. That is, however, precisely what happens at the beginning of the powerful and very pertinent Black Earth Rising (streams on Netflix Canada).

In the opening minute, central character Eve Ashby (Harriet Walter), an internationally renowned lawyer, is accused of “neo-colonialist BS” by an angry black student. This is at a talk she’s giving about her work prosecuting war criminals mainly from African countries. The student wants “African solutions for Africa, not paternalism” and says, “These crimes would never have happened if your world had never gone there in the first place.” Ashby, trying not to be angry, tells him, “It may help you to know that my daughter is black.”

It doesn’t help. The tense and often furious relationship with her daughter Kate (Michaela Coel) is a central part of the drama. (It’s presented as a Netflix Original but it was made by the BBC and aired in Britain last fall to acclaim.) However, this particular mother/daughter dynamic is fraught with a political dimension that goes beyond family troubles to delineate a core argument about justice and revenge on the international stage.

Kate was rescued during the Rwandan genocide in 1994 and adopted by Eve. She remains distressed that she doesn’t remember anything about her Tutsi family. And now, as the complex narrative begins to unfold, Eve is about to prosecute one Simon Nyamoya (Danny Sapani), who once saved Tutsis from Hutu attackers in Rwanda, but became a mercenary in the Democratic Republic of the Congo and recruited child soldiers. To Kate, he’s part of her tribe and a hero. She is stunned that her mother would target him.

Created by writer-director-producer Hugo Blick, who also wrote the award-winning The Honourable Woman, Black Earth Rising goes where few contemporary dramas would dare. The heft of it is suggested in the use of Leonard Cohen’s You Want It Darker over the credits: “You want it darker/We kill the flame.” There is also a strong Canadian angle to the story. While Eve and Kate argue and debate, a Canadian peacekeeping officer (Nigel Whitmey) in Rwanda is trying to arrest a war criminal and getting no help or solace. In the first episode the Canadian delivers an angry speech to a French peacekeeper about the Canadian mission to Rwanda being hamstrung during the genocide.

There are a lot of wounded feelings here but it is also an admirably sharp thriller. There are efforts to stop the prosecution of the former Tutsi hero at the International Criminal Court in The Hague, and the methods used are vicious. There is an assassination of a major figure in the drama and an investigation into who carried it out. It’s not that it’s a lightweight thriller inserted into a weighty drama about moral boundaries and genocide. The tensions are there from the start, before the assassins and spies turn up.

Doing one of his excellent gigs as a roguish but cunning man is John Goodman, playing Michael Ennis, who is Eve’s old legal mentor. Lacking Eve’s fierce righteousness he’s the one who can play mind games with the U.S. State Department to get things done. Much of the eight-part series turns on Ennis and then Kate handling a prosecution that she has deeply complex feelings about while he carries the legal-smarts side of things.

Black Earth Rising is not popcorn entertainment. Don’t expect to binge easily on it and come away happy. You will be thrilled at times, as there is a genuine sense of menace that pervades it. But its main theme is an incendiary series of questions. What is justice? Is the idea of an International Court mere white European self-righteousness? Why are alleged African war criminals targeted and not others? What does it mean to be tribal? The series argues with itself and with the viewer’s assumptions. That in itself is a daring narrative manoeuvre.

For a TV drama to enter the arena of the Rwanda massacre and question the role of Europe in enacting ICC prosecutions is daring and estimable. 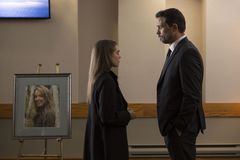 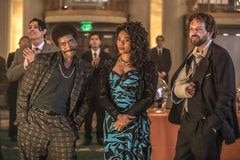 Thank TV ratings for killing the increasingly irrelevant Oscars
Subscriber content
January 21, 2019
Follow John Doyle on Twitter @MisterJohnDoyle
Report an error Editorial code of conduct
Due to technical reasons, we have temporarily removed commenting from our articles. We hope to have this fixed soon. Thank you for your patience. If you are looking to give feedback on our new site, please send it along to feedback@globeandmail.com. If you want to write a letter to the editor, please forward to letters@globeandmail.com.
Comments