Remember where you were when you heard in 2016 that Britain had voted narrowly to leave the European Union? If you remember at all – the referendum seemed like a mere sop to an anti-EU fringe at the time – you probably went “uh-oh!”

We should all have paid closer attention. It was a populist revolution unfolding before our eyes. And, as we later learned, grievances had been stoked and anti-EU votes corralled by deft use of social media. Data, metrics and pinpoint advertising to the aggrieved were the key. In 2016 Facebook seemed so benign, didn’t it? What fools we were, and now look at the shambles that is British politics tackling Brexit.

Brexit, the movie (Saturday, Crave/HBO, 9 p.m. ET), is a blistering take on the referendum. About the real figures that pulled off the upset victory of a “Leave” vote, it’s a lethal farce focused on Dominic Cummings, the “geeky analyst” who called the tune in the Leave campaign, and he’s played by Benedict Cumberbatch.

It’s a masterful performance from Cumberbatch as the neurotic, arrogant geek who, it turns out, had his ear to the ground – in one powerful scene he literally does that – and was cannily able to construct an anti-EU narrative that politicians and their advisers could not articulate. Cummings in real life is more long-winded and pompous than the film depicts but it gets one thing absolutely right – he’s a disrupter and understands how to coax disruption into a flaming fire.

The film, produced by Channel 4 in the U.K., with HBO, is made in the style of such fast-take HBO movies about U.S. politics as Game Change, about former vice-presidential candidate Sarah Palin, and Recount, about the Florida recount in the 2000 United States presidential election. It might also be influenced by the timbre of Ryan Murphy’s The People v. O.J. Simpson. That is, the tone seems flippant and leans toward farce but in its comedy it has soul-destroying perceptions about the gullibility of the public and the weakness of traditional institutions.

The film opens with a montage of footage from recent British politics about European Union membership. (It’s written by playwright/screenwriter James Graham and directed by Toby Haynes, who handled episodes of Black Mirror and Sherlock.) The most striking clip is of Margaret Thatcher demanding, “We want our money back.” Then various Conservative figures meet, usually in secret, to talk up the possibility of a victory for the Leave side. They’re not optimistic. Such anti-EU figures as Nigel Farage and Boris Johnson stumble around, unsure of what direction to take and, all the while, Cummings is figuring out the message they need. Nobody wants him in charge because he’s abrasive and strange and, besides, he says things they don’t understand: “Money is one thing but data is power.”

There are two key threads in the movie, which is splendidly rapid-paced and gripping. One is Cummings trying to write the main message he needs to take to the public. He begins with ”Take Control” and then changes it to “Take Back Control.” It’s a stroke of genius that happens in a curious moment of Cummings as vulnerable father-to-be, in bed with his pregnant wife. The other thread is the injection of social-media data into the Leave campaign.

Cummings is at first wary but then intrigued when a mysterious young data analyst tells him, "Facebook knows when you’re falling out of love with your partner.” From there, the Leave campaign becomes a mad jaunt in which Cummings knows how to find millions of disaffected voters, but the Remain side is oblivious to what’s happening online. It’s funny but simultaneously terrifying, absurdist humour.

While the movie is anchored in facts it isn’t comprehensive, nor was it meant to be. When it aired recently in Britain on Channel 4 under the title Brexit: The Uncivil War, reaction was mixed. Some reviews praised its precision and arid humour while others loathed it for turning a national crisis into farce. “Superficial, irresponsible TV,” harrumphed The Guardian.

To viewers here it stands as a master class in conjuring TV drama from recent, murkily political events. It’s simplistic but in its simplicity it captures the appalling crudeness and lack of nuance that is often the populist message from Donald Trump, Doug Ford and others. To truly savour Brexit, the movie, you have to put aside your repugnance at the asinine agitprop of populism.

It’s also a master class in contemporary politics. The scenes of focus groups being canvassed for their biases and grievances are deeply revealing. The scenes in which Cummings tweaks those biases into vote-getting, mendacious hogwash are a sobering education. And in the end it’s clear how the Leave side won, but equally clear nobody knew what to do after the votes were counted. Hence the shambles we witness today. Be amused and educated by Brexit, the movie, but be very afraid too.

To The Worlds is a true, uplifting hour about unlikely skating champs
Subscriber content
January 16, 2019 Mary Kay Stearns, 93, starred in one of the first sitcoms on television
Subscriber content
January 14, 2019 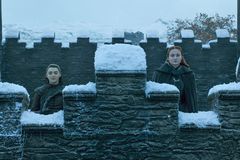